Stocks have made record gains in 2019… But don’t buy the media hype about the return of the bull market… In the mailbag: “Give socialism a chance”…

It’s the best performance for the index at this point in the calendar year since 1991.

That sounds impressive. And after the 20% peak-to-trough plunge from September through December last year for the S&P 500, it’s a big relief. 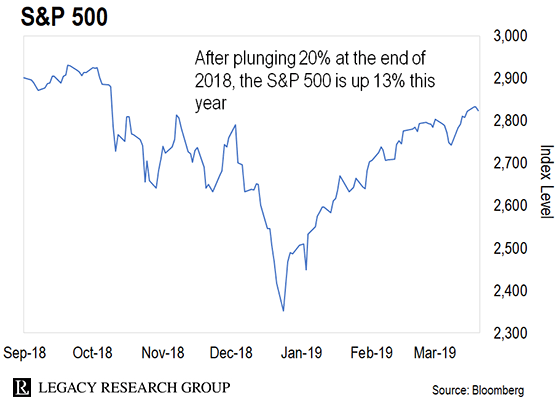 The problem is, as we’ve been showing you, these types of rallies are a common feature of bear markets.

As the old-timers say, bear markets seek to punish as many people as possible. They do that by sucking investors back into shaky markets with “snapback rallies” – sharp rallies that come hot on the heels of a dramatic fall.

These rallies make investors feel good again. People start to wonder what they had been so worried about. But history shows they are often followed by devastating plunges.

You can see for yourself in the chart below. It tracks the two most powerful bear market rallies going back to the start of the century (blue bars)… and the stomach-churning plunges that followed them (red bars). 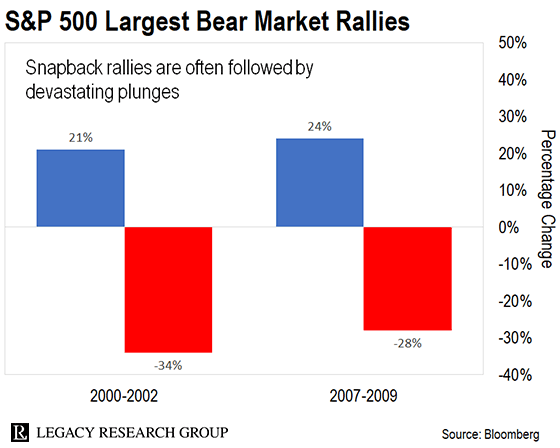 In each case, the bear market did exactly what the old-timers warned it would. It sucked unsuspecting investors back into stocks – just in time for the big fall.

That was the bear market triggered by the dot-com collapse.

And something similar happened during the last bear market, between 2007 and 2009.

The S&P 500 shot up 24% in less than two months during that bear market. But then it plunged 28% over the next three months.

When the stock market is screaming higher – even if it comes hot on the heels of a big plunge – your natural instinct is to get on board.

And stocks always have their cheerleaders on CNBC and in the pages of The Wall Street Journal, which only piles on more pressure to be bullish.

But remember, these outlets rely on corporate America’s advertising dollars for their profits. And corporate America wants to convince as many people as possible to invest in the stock market.

That’s why you need to be able to hold your own counsel… or you’ll get caught in the bear trap when it snaps shut.

It can be frustrating to sit on the sidelines with cash, waiting for the pullback that never seems to come, while stocks grind higher. Remember, though, that successful trading involves constantly evaluating the risk and reward probabilities. And the simple fact is that the higher the market stretches into overbought territory the higher the risk to long positions and the lower the potential reward.

I can’t tell you precisely when the market will pull back. But I will remind you that we’ve seen similar conditions before – where it seems as though the market will never decline again – and we always get a pullback eventually.

This doesn’t mean you should sell all your stocks and run for the hills. But as we’ve been showing you, now is a great time to make sure you have plenty of cash and gold in your overall portfolio mix.

It’s also a great time to clear some time in your schedule… refresh your memory on what you own in your stock market portfolio… and consider taking profits on stocks you’re not comfortable holding through a bear market.

Before we go, a final warning from Legacy Research cofounder Doug Casey…

The mainstream media is making a song and dance about how this is the best start to the year for U.S. stocks since 1991.

What it’s failing to mention is the 1991 rally happened while the U.S. economy was mired in a recession.

As you may recall, this was the downturn that handed Bill Clinton the presidency when he ran against George H.W. Bush in 1992.

Bush had an 89% job approval rating in 1991, after the victory by the U.S. and its allies in the first Gulf War.

But it wasn’t enough to offset voter anger over a slumping economy. Clinton ran on the campaign slogan, “It’s the economy, stupid.” And it worked…

And now, as the next collapse approaches, Doug says it’s about to happen again – this time to Donald J. Trump.

In fact, he believes Trump will be the last Republican president. We’ll leave Doug with the final word on that…

For the last couple of generations, everybody who’s gone to college has been indoctrinated with leftist ideas. Almost all of the professors hold these ideas. They place an intellectual patina on top of nonsensical emotion and fantasy-driven ideas.

When the economy collapses – likely in 2019 – everybody will blame capitalism, because Trump is somehow, incorrectly, associated with capitalism. The country – especially the young, the poor, and the non-white – will look to the government to “do something.” They see the government as a cornucopia, and socialism as a kind and gentle answer.

A majority of millennials are in favor of socialism. By 2050, whites will be a minority in the U.S. A large majority of the people who commit suicide each year are middle-class white males – essentially Trump supporters. The demographic handwriting is on the wall. Trump’s election was an anomaly.

It’s a controversial call. (Tell us whether you agree or disagree with Doug by writing us at [email protected].)

It’s the big buzz right now around Legacy Research HQ in Delray Beach, Florida. And you won’t want to miss it.

That’s because next Wednesday, March 27 at 8 p.m. ET, Doug will reveal his five politically incorrect predictions for 2019 and beyond in the world premiere of Totally Incorrect: LIVE.

To make sure you don’t miss it, secure your spot here.

In the mailbag: “Give socialism a chance”…

Today, it’s all about the rise of socialism in America again, after reader Bruce A. said, “We have to get away from only capitalism or only socialism. There is merit in adopting parts of each.”

Well, almost all… One of your fellow readers is more interested in poking a hole in cryptocurrencies after we wrote about gold-backed cryptos last week…

No crypto is ever going to be better than fiat until governments stop or can’t treat every transaction as taxable. Go ahead, account for every latte you’ve had and pay up them taxes.

Now, back to the big debate between capitalism vs. socialism…

It’s obvious the capitalist system is not working. Just look at the GROWING numbers of FAMILIES in the U.S. living under bridges, in tent cities, alleyways, gullies, and drainage ditches. It’s utterly embarrassing and disgusting for a nation claiming to be “the richest,” “the shining example on the hill,” and “the most developed”…

Give socialism a chance to breathe and develop into the life-sustaining political system the people want to develop it to be!

The fact is we already have a mixed system here in the USA. Capitalism essentially lets you keep what you earn or harvest, while socialism takes from you and tells you what to do, which limits your freedom. Every day, more of our freedom is taken. So it behooves us to vote for people who can help counter this trend. The new crop of candidates thus far is scary.

People seem to have lost sight of the reality underlying this debate. Does the system, whatever it is, provide the vast majority of the people with a quality of life consistent with the society’s ability to maintain it indefinitely?

Ignore the window-dressing and sales talk of frontline politicians, mainstream media, and the fringe dwellers who are mostly complaining about not being “IN” the system they criticize. Look at the reality around you. In the greatest champion of the so called free-enterprise capitalist system – the U.S. of A – does the vast majority of citizens actually have a quality of life? Or is it simply quantity?

Neither socialism nor capitalism is the answer, as both have fundamentally failed to provide quality of life with any means to consistently maintain that quality indefinitely. They are both self-corrupting and easily corruptible and not self-correcting, despite any claims to the contrary.

We need to rethink how societies function. It’s that simple. And we cannot do that successfully, fighting and arguing with each other over things that are proven not to work.

Have both capitalism and socialism failed to make our lives better? Is there another solution? Write us at [email protected].