Most investors have left Bitcoin for dead… But this chart says it’s about to shoot higher… In the mailbag: “Democratic governments seldom last 200 years”…

Bitcoin is about to leap higher…

Yesterday, we showed you why cryptocurrencies backed by physical gold are set to become some of the most popular on the planet.

Today, we’re continuing with the theme by circling back to the world’s first cryptocurrency – Bitcoin.

Bitcoin is down nearly 80% from its all-time high in December 2017.

But as you’ll learn in today’s dispatch, it’s primed to shoot as much as 38% higher by mid-May.

That’s roughly four times the average annual return for the S&P 500 – our regular stand-in for “the U.S. stock market” – in just a couple of months.

Regular readers are used to hearing from Teeka Tiwari (Palm Beach Confidential, The Palm Beach Letter) and Marco Wutzer (Disruptive Profits) on where the crypto market is headed.

Teeka and Marco travel around the world to cover the new developments in the crypto economy. And what they’ve learned has made them both long-term crypto bulls.

But today’s Bitcoin call is from an expert who’s looking at it purely from a short-term trading perspective – master trader Jeff Clark.

Jeff heads up our Delta Report trading advisory. His regular beat is the stock market. But he also keeps an eye on Bitcoin for his readers.

And right now, Jeff says Bitcoin’s chart is pointing to an explosive move higher from just above $4,000 – where it trades at writing – to $5,500.

We’ll get to the details of Jeff’s call in a moment.

First, if you’re new to the conversation, a quick word on why we’re interested in Bitcoin in the first place.

Up to the launch of Bitcoin in 2009, outside of gold, all widely-used currencies were issued by a congress, a parliament, or a bank.

Central banks, along with government-regulated banks, issue the U.S. dollar, the euro, the yen, and so on. And thanks to the magic of the digital printing presses, they devalue fiat currencies in an attempt to gin up economic growth (a path they’ve been pursuing vigorously since 2008).

Bitcoin, on the other hand, has no central issuing authority. Its supply is capped at 21 million coins. And the pace at which new coins are issued is governed by a pre-agreed set of rules expressed as an algorithm.

In short, Bitcoin is a non-state currency and payment network…

That’s how Nick Giambruno, who heads up our Casey Report and Crisis Investing advisories, describes it.

It’s what makes Bitcoin and other cryptocurrencies attractive to anyone who wants to hold wealth in a currency that can’t be inflated at will by central banks… respects privacy… and holds a healthy disdain for government.

Here’s Nick with more on that…

Owning Bitcoin lets you escape the matrix… the financial prison that governments have erected with fiat currencies, central banks, and privacy-killing regulations serving as the bars on the door.

Unlike paper currencies, Bitcoin is an inherently international asset. It has incredible value as an international transfer mechanism. You can take any amount of it in and out of any country. You don’t need permission from any government.

The bad news is that, as we touched on earlier, Bitcoin prices have been tumbling for over a year.

It’s what folks have started calling the “Crypto Winter”…

Bitcoin is the bellwether for the crypto market. 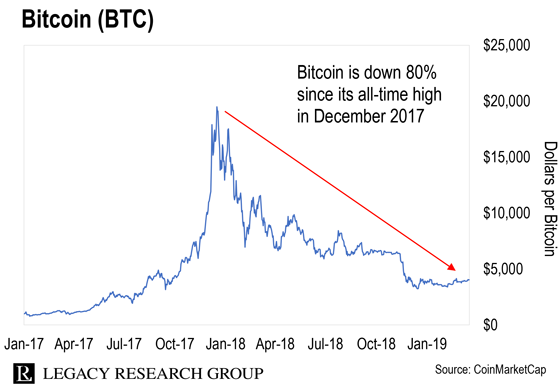 But as Jeff has been telling his readers, he now sees higher, not lower, prices ahead.

It pays to listen to Jeff’s market-timing calls…

When Bitcoin was trading just under $3,600 in February, Jeff told his Market Minute readers that he’d spotted a bullish breakout pattern in its price chart.

And he said it wouldn’t surprise him to see Bitcoin trading back near $4,200 within the next few weeks.

We’re not quite there yet. Bitcoin trades for $4,032 at this writing. But we’re getting close. Here’s Jeff with more…

When we looked at the king of the cryptocurrencies last month, we noted the technical pattern of Bitcoin looked bullish. The chart was breaking out to the upside of a “consolidating triangle” pattern. And we figured Bitcoin could be trading back near its December high of about $4,200 within just a few weeks.

But while the talking heads on cable news are hyped up about the snapback rally in stocks (which we warned about here), they’re overlooking the big move in Bitcoin.

That tells you there’s a lot more room for Bitcoin to rally.

It’s all in the following chart…

It’s of the NYSE Bitcoin Index, which Jeff uses to track the price of Bitcoin using stock market charting tools.

Here he is with more on why it caught his eye…

Notice how Bitcoin is now trading above all of its various moving averages – the squiggly red, green, and blue lines on the chart. That’s the first sign of bullish price action we’ve seen since last July.

But unlike last July, when the rally quickly reversed and Bitcoin headed lower, the technical indicators I look at are nowhere near the overbought conditions today. Instead, they’re in neutral territory. This tells us there’s still lots of energy available to fuel higher prices.

Given this setup, Bitcoin shouldn’t have any trouble rallying above the first red resistance line at about $4,200. The November high of $4,400 is the next logical resistance level. And if Bitcoin can get above $4,400, there’s not any resistance until way up near $5,500.

It’s the sort of price action that will get folks talking about… and investing in… Bitcoin again.

That makes now a great time to be a Bitcoin buyer…

If you’re a seasoned crypto investor, now is a great time to be adding to your Bitcoin position and preparing for the end of the Crypto Winter.

And if you’re a newcomer to all of this, it’s a great time to make your first foray into Bitcoin.

For more on how to do that, make sure and check out the simple, one-page guide our team at Palm Beach Research Group put together.

It shows you the three exchanges they recommend to buy Bitcoin… four secure digital “wallets” you can use to store your Bitcoin… and where you can trade it for other cryptos.

Just don’t forget that, like all cryptocurrencies, Bitcoin is highly speculative. And it has a track record of rollercoaster-like “volatility” (aka price swings).

So make sure to keep your position size small. And be mentally prepared to see big swings in price over short periods of time.

If you do that, the potential gains are enormous… and you’ve got limited downside.

The mailbag debate about the rise of socialism in America continues.

Last Tuesday, we asked: Is socialism the “bane of creativity and invention,” as reader David H. put it? And we got a ton of responses…

Any adult with a functioning brain knows that one of the better forms of government is a benevolent dictatorship, that democracy is so deeply flawed that most democratic governments seldom last 200 years, and that socialism is even worse. Yes, of course, socialism is indeed the bane of all that is well and good.

Your article was well written and spot on for accuracy. My greatest fear for America today is that we have already passed the “tipping point.” I sincerely hope I am wrong but am not at all optimistic about the future of our nation.

Much of this kind of thing just doesn’t interest me. This time I couldn’t stop reading and everything was very clear. I agree that socialism is not the answer. Too bad, instead of changing our clocks to annoy us, we can’t get back to changing from greed to respect for everyone and proper morals from our government’s highest-ranking individuals. I so loved the early-1970 era.

Hope your weather in Dublin gets better. It is starting to sound like our hurricanes here in Florida, only ice and snow.

There are many individuals who wish for socialism and who would be more than happy to be “subjected to the medical systems of countries who currently use socialism.” Those to whom I refer, unlike David H., can’t afford medical expense insurance and can’t afford preventive medical care at all in our country. Caring for others includes the others who have so much less than you do.

Not all advancements in medicine and in other important fields occur here. Some of those socialist medicine countries do a lot of advancing, too. If we could somehow reduce the extreme greed in this country, charity might actually be effective at diminishing the pain – medical and otherwise – among our many poor.

If charity can solve the big problems, just where is all that charity? Why are there so many filthy rich in this country who give very little to anyone?

Could charity be the answer to America’s problems, like Malcolm J. suggests? Or is Joan M. right that what we need is a return to respect and proper morals? Write us at [email protected].

IN CASE YOU MISSED IT

If you’re a longtime reader, you know Legacy Research cofounder Doug Casey is a living legend. He’s made multimillion-dollar fortunes as a globetrotting speculator. He’s written three best-selling books. And he shocked millions of Americans on national TV when he appeared on Phil Donahue’s show in 1980.

But it’s been almost 39 years since he sat down in front of a camera for a wide-ranging, incisive interview… Until now.

On Wednesday, March 27 at 8 p.m. ET, in the world premiere of Totally Incorrect: LIVE, Doug will reveal five controversial predictions for 2019 and beyond…

Don’t miss out on learning what’s in store for America. Reserve your spot for free, right here. 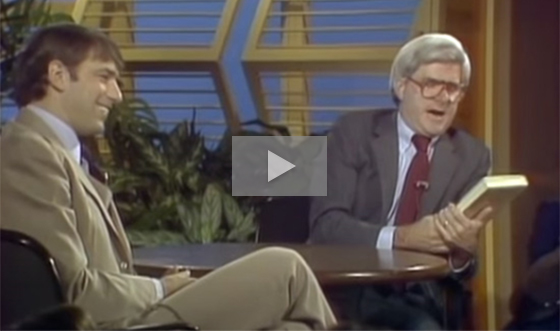