The next big opportunity in gold will be digital… It’s your newest weapon in the fight for financial freedom… In the mailbag: “Things won’t change until Americans get hungry enough”…

It’s a new way to own gold…

Today, we’re continuing our deep dive into the future of money (catch up here, here, and here) with the newest way to own gold.

But you can now also own gold through gold-backed cryptocurrencies.

These are digital coins backed by physical gold that you can send and receive across blockchain networks.

And it sparks important questions about security, reliability, and profit potential… which we’ll cover in today’s dispatch.

But before we get to that, an update on the call on gold stocks we made last year in these pages.

As we told you in the October 22 Daily Cut, that was the forecast master trader Jeff Clark made at our first annual Legacy Research Investment Summit in Bermuda last fall.

Jeff said gold stocks – as tracked by the VanEck Vectors Gold Miners ETF (GDX) – would be one of the top-performing investments over the next six months.

And his call proved prescient. We’re closing in on the six-month mark… and GDX is up more than 13%. 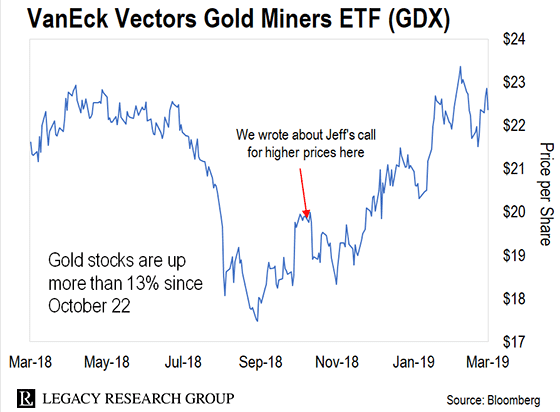 We’ve been pounding the table on why it’s time to own gold since we launched The Daily Cut last August.

Gold stocks give you “leverage” to the price of gold, as we explained here.

In a bull market, they give you extra oomph over and above the gold price. But they sink further than gold in a bear market… making them unreliable investments over the long term.

That’s why you want to own physical gold as the “disaster insurance” portion of your gold portfolio.

Physical gold – whether its bars or coins – is something you store privately and keep in your portfolio long term to hedge against disaster.

For more on that, we turned to Nick Giambruno, who heads up our Casey Report and Crisis Investing advisories. He is one of our most vocal proponents of owning gold as “disaster insurance” at Legacy Research. As he put it…

For thousands of years, gold has been the premier form of global money.

That’s because gold has unique attributes that make it well-suited for use as money. It’s durable, divisible, consistent, convenient, and has intrinsic value.

Gold is universally valued. Its value doesn’t depend on any government. This is why different civilizations around the world have used gold as money for millennia.

That’s not to say that time stands still. Innovations happen. And now, we have a complementary tool for advancing financial freedom: gold-backed cryptocurrencies.

Recently, dozens of gold-backed cryptos have started to gain traction…

The idea is simple: You issue a digital coin on a decentralized “blockchain” network. (A blockchain is just a fancy word for the technology behind cryptocurrencies.)

Then you back each coin with a pre-agreed weight of physical gold – for instance, a gram per coin – in a secure vault. Anyone with an internet connection can set up an account, buy these digital coins, and in many cases, later redeem them for gold.

Backing these coins with physical gold will solve a major issue with cryptocurrencies that are not tethered to a more stable asset – volatility. Nick again…

Bitcoin and other cryptocurrencies can be wildly volatile. This is a problem for anyone looking to use cryptos in the regular course of business.

Gold-backed cryptos, on the other hand, should have relatively stable prices because they’ll be tethered to the price of gold. This should make them appealing to merchants, lenders, businesses, investors, escrow services, and the like. In other words, anyone who wants to conduct business in gold… but also wants the convenience of cryptocurrencies.

In short, backing cryptos with gold doesn’t just help stabilize their value. It also makes doing commerce with gold much easier than it has ever been before.

As Doug puts it, crypto technology will “kiss gold and make it better”…

But even Doug admits that holding physical gold can be a hassle. And he says owning some gold-backed cryptos, in addition to physical gold, can help solve that…

One of the disadvantages of gold is it’s hard to transport. Although today it’s not illegal to cross borders with gold, in two separate countries on two separate continents when I was carrying about a dozen silver one-ounce coins, they stopped me at the X-ray machine and examined them. No problem because it was silver and they weren’t worth anything, but if they had been gold it would’ve been a problem.

It’s not illegal to transport gold. But it’s becoming inconvenient to do so. I think a gold-backed crypto will kiss that and make it better.

In fact, Doug sees gold-backed cryptos as the natural evolution of cryptocurrencies…

Both logical and necessary. Knowing that your digital money is redeemable for a specific and fixed amount of gold somewhere is a huge advantage. Gold-backed cryptos are going to be huge. The best of both worlds.

Cryptos are NOT a substitute for owning physical gold…

Physical gold is still the best way to preserve your wealth over the long term.

But as Nick and Doug have been telling their readers, gold-backed cryptos are bringing sound money to the blockchain.

They can be much easier to transact with than physical gold. And they can also help you avoid the roller-coaster volatility of regular cryptocurrencies.

Next week, we’ll have more for you on gold-backed cryptos from Doug and legendary resource investor Rick Rule.

Meantime, you can read more about why Doug believes you should hold gold-backed cryptos in addition to physical gold right here.

In the mailbag: “Things won’t change until Americans get hungry enough”…

The maxim in the commodities markets is that the cure for low prices is low prices. Maybe the same logic would ultimately apply to socialism. When things got bad enough, the USSR collapsed. My wife, originally from Manila, has said things won’t change until Americans get hungry enough.

I have run across the reader mailbags where some self-appointed “experts” on socialism called others “idiots” who were critical of socialism. I used to live in one of those countries. Nothing works in that system (although some ideas might sound good for some people). Everybody gets poorer and poorer, even the ruling class (although they were better off than the rest of us).

So, if you want to have stores with empty shelves, stay in line for toilet paper, wait months for medical tests or doctor visits, have “free” education where there are 20 candidates for each place (guess who gets admitted), then go for it.

Can socialism save itself is the question. Socialism attributed to the other Baltic nations is vigorously denied by them. High social welfarism may be one form of wealth transfer (aka legal theft) but it is not socialism. Human nature will never permit socialism to become the panacea it claims. Further, with centralization of power, it inevitably leads to totalitarianism.

Can socialism save itself, as John R. asks? Would you trust gold-backed cryptos?

Let us know your thoughts at [email protected]. We love getting your feedback. And we read every email you send in.