Talk about an out-of-favor idea…

He’s talking about the return of inflation – rising prices for everyday goods and services.

The narrative winning out in the mainstream media is that inflation is dead and buried.

But Tom is betting the mainstream is wrong… and gold will shine in the inflationary cycle that’s coming.

When Tom’s “rabbit’s foot” starts to twitch, we pay attention…

He’s been right on several big calls like this before – including contrarian bets on gold in 2000 and on bitcoin in 2011.

And Tom’s not the only analyst here at Legacy recommending gold as an antidote to inflation.

And as you’ll see in today’s dispatch, there’s one type of gold investment Tom and Teeka agree will give you the most oomph in the coming rally.

Since our inaugural issue on August 15, 2018, we’ve urged you to take action and buy gold dozens of times. In fact, we’ve sounded like a broken record on the subject.

But despite our best efforts… and despite gold and gold stocks soaring since we first put the rally on your radar… this remains a contrarian call.

That’s because the mainstream has decided that inflation (which gold helps protect against) is no longer a threat.

Just look at these magazine covers Tom showed his readers…

The first is from the April 2019 issue of Bloomberg Businessweek… 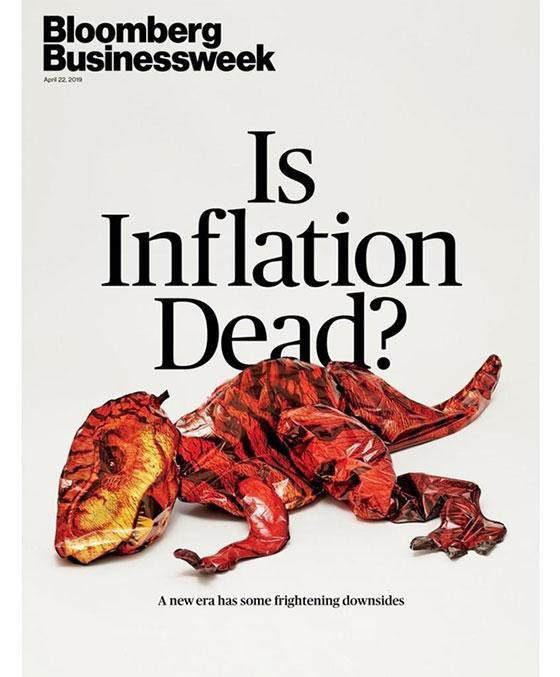 The second is a front page The Economist published last October… 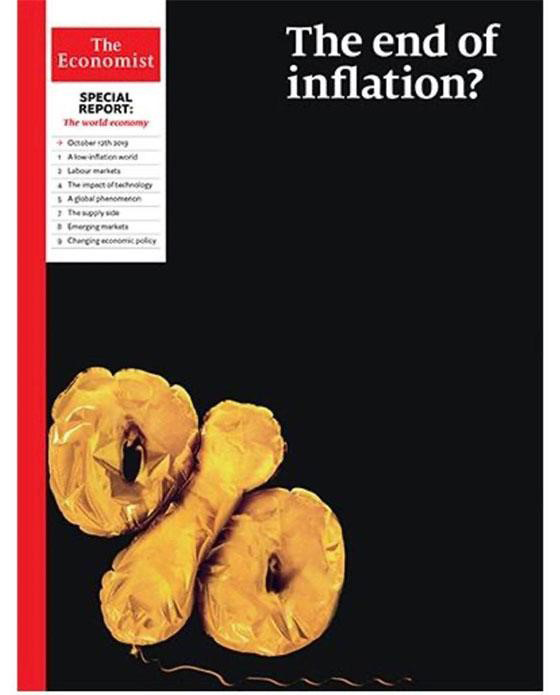 Why did Tom single these out?

Because magazine covers show what ideas are winning in popular investing culture. Tom…

Right now, deflation owns the narrative war in the press. And although these covers are from last year, this idea still has legs. But eventually the tide will turn. When it does, trillions of dollars will come charging out of bonds – which lose value to inflation – and into gold. For years, people have used gold and other precious metals to protect against inflation.

It may take a while for the deflation narrative to die. But… uh-oh. What’s this? The prices U.S. consumers paid for groceries jumped 2.6% in April. That’s the highest monthly jump in food prices since February 1974, in the middle of America’s last inflationary cycle.

The tide could be about to turn soon…

Most folks know Teeka as a crypto expert. But he spent decades on Wall Street… and ran his own hedge fund… before he began recommending bitcoin in 2016.

He recommends everything from stocks… to precious metals… to income-producing investments at The Palm Beach Letter.

That involves keeping a close eye on the big picture. And that’s led Teeka to worry about inflation, too. Teeka…

The unprecedented collapse of the global economy due to this coronavirus pandemic calls for an unprecedented solution. Which is why the whole world is about to embark on a money-printing odyssey like no one has ever seen before.

My team estimates the governments of the U.S., Europe, and China will spend nearly $6 trillion combined in stimulus money to rescue the system. That’s a very conservative estimate. This massive infusion of “printed” money will create inflation.

Gold’s supply is scarce. Unlike dollars or euros or yen, governments are unable to create gold out of thin air. That makes physical gold, in the form of coins and bars, a great way to protect against inflation and preserve your buying power.

Regular readers are probably sick of us banging on about this. But you want to make physical gold the bedrock of your portfolio.

Right now, there’s a shortage of bars and coins for delivery. So we recommend you do the next best thing and buy shares in the Sprott Physical Gold Trust (PHYS).

It’s an exchange-traded trust that stores gold bars in your name in a secure vault at the Royal Canadian Mint.

During a gold bull market, the real magic happens in gold stocks. It all has to do with leverage. When gold goes up, gold stocks go up much, much more.

This can deliver eye-watering gains for folks who buy gold stocks at the right time.

Just look at what happened the last time gold rallied… 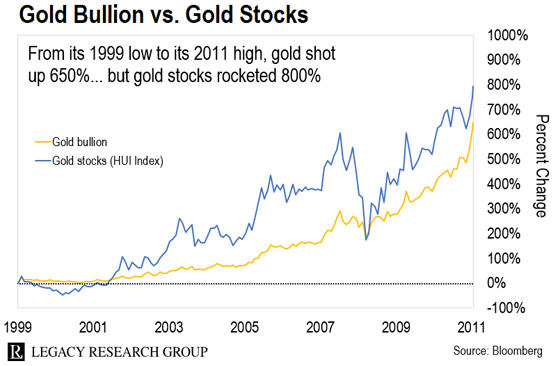 But gold stocks have returned more than double what bullion has.

Look at this next chart… 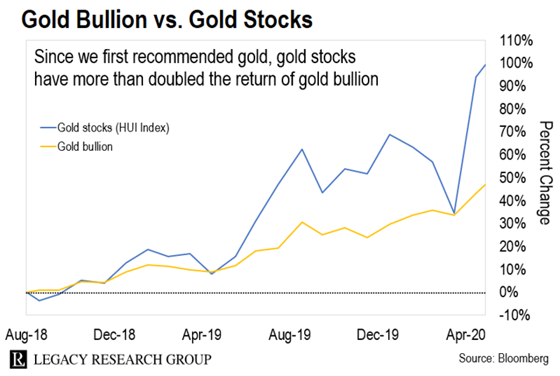 And inflation is rocket fuel for gold. If we get inflation, as Teeka and Tom predict, you can expect even better returns from gold stocks.

It’s called Tom Portfolio. And it will teach you exactly how to take maximum advantage of the soaring prices of gold and gold stocks.

Tom has spent months working on it. It’s finally ready.

I talked to Tom all about it for this week’s issue of our Legacy Inner Circle advisory, which hits paid-up subscribers’ inboxes tomorrow.

Inner Circle is where we dive deeper into the profit themes we discuss in these pages. (Find out more here.)

And Tom told me he’s putting together a very specific gold trade for his new service. Tom…

My idea of an ideal gold stock is a hill full of gold in the middle of nowhere. There are no roads to it. There’s no electricity there. It’s completely uneconomic to mine at current prices. You can buy the shares in those companies for next to nothing.

But if gold shoots up to $2,000… or $5,000… or even $10,000… that little hill in the middle of nowhere suddenly becomes attractive, exploitable, and economic. Its shares resemble options contracts. They give you enormous leverage – or extra oomph.

At the moment, shares in these companies are not very valuable. But if gold skyrockets – and I think it’ll go up 10x – then these shares could go up 20x… or even 30x and higher.

A simple way to play this trend is by picking up shares in something like the VanEck Vectors Junior Gold Miners ETF (GDXJ). It gives you exposure to a basket of junior gold and silver mining companies.

It’s the largest exchange-traded fund (ETF) for junior mining company shares. And it gives you one-click exposure to about 80 smaller mining companies.

But it won’t give you the same kind of oomph Tom’s gold stock recommendations will.

Tom will also share guidance on buying physical gold. Unfortunately, since the onset of the coronavirus panic, it’s been hard to get your hands on it for love nor money.

But Tom has figured out ways to pick up physical gold at minimum cost and hassle.

So make sure to tune in to Tom’s special briefing on gold next Wednesday, May 20, at 8 p.m. ET. He’ll explain in detail the strategy he’s personally using to profit from gold’s surge.

He’ll also share the name of one of his highest-conviction trades, which you can act on right away. So if you haven’t signed up to attend already, go here to save your place now.