It was a huge call…

As regular readers know, colleague Teeka Tiwari has been shouting from the rooftops about a surge in bitcoin and other cryptos.

On March 18, he hosted a special briefing about what he saw coming called 5 Coins to $5 Million: The Final Five.

He showed folks how five tiny coins could turn five $500 stakes into at least $5 million.

And last night, more than 40,000 of your fellow readers tuned in to see Teeka’s latest broadcast about the catalyst for the rally.

He also called huge rallies in bitcoin and other cryptos last year.

And Teeka’s done it again with his latest prediction… 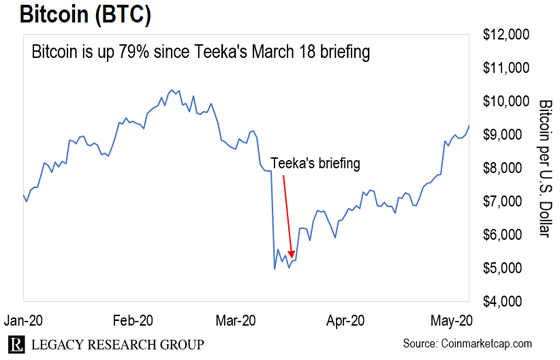 But it’s not so much when you consider that the average gain of Teeka’s final five coin recommendations is 393%.

So kudos if you took the plunge on his recommendation. You’re up a lot as a result. And that’s a great first step.

But it’s not only when to buy that you have to think about as a crypto investor. As you’ll see today, when you sell is critical, too.

So, if you’re new to crypto investing… or even if you’ve been at it a while now… please pay special attention today.

It could mean the difference between making a lot of money in crypto… and making truly life-transforming gains.

That’s the lesson Tom Dyson shared with his readers…

If you don’t know him already, Tom started out working for Citigroup in London, England.

After leaving the corporate world… and becoming a top-selling newsletter analyst… he cofounded Palm Beach Research Group along with Mark Ford.

He headed up our flagship Palm Beach Letter advisory… before hitting the road with his family on a round-the-world trip.

And he now writes one of our most popular e-letters, Postcards From the Fringe.

It’s all about his travels around the world with his family… and his big-picture insights into markets.

Tom is one of the best big-picture investors I know. In the early 2000s, when we were coming off the dot-com bust, a lot of folks were still fanatical about tech companies… and stocks in general.

But Tom didn’t touch them. Instead, he drained his bank accounts, and even took money from six of his mother’s bridge friends.

Then, he put everything, his entire life savings, into a single investment few others cared about: gold.

Within eight years, gold went up almost 500%. In fact, gold was the decade’s best-performing investment.

Tom was also an early investor in bitcoin…

I found bitcoin in 2011. I was in some internet forum for geeks and someone mentioned it. I looked it up. And the moment I saw what it was, I knew. I just knew.

One bitcoin was worth less than $10 at the time. There was only one place to buy them – a website in Japan called Mt. Gox. And it was a brute to get a hold of…

I had to open an account with a PayPal-type service to transfer the money. Then, I had to jump through hoops like sending faxes, passport copies, and bank details. The whole thing seemed like a scam.

But I wired $5,000. Which was a lot of money for a guy, with three babies, who was still trying to make it in the world.

Altogether, Tom put $25,000 into the cryptocurrency when it was still owned mostly by geeks, nerds, and the odd libertarian.

This was long before anyone in the mainstream press was focusing on what was going on in this space.

And Tom didn’t stay quiet about his prediction…

He told anyone who’d listen to buy bitcoin.

He even started giving bitcoins away. As he tells it…

I gave one to anyone who came to my office, including Bill Bonner – I gave him a physical version of bitcoin called Casascius. And I gave them to my friends, Michael Checkan – co-founder of Asset Strategies International – and Swen Lorenz, an investment blogger.

In 2013, Tom even suggested to one of the partners here at Legacy Research, Ryan Markish, to give bitcoin for free to our readers.

Then bitcoin’s price began to really hop. Tom’s investment turned into $1 million. And he thought, “That’s enough. I’m out.”

He sold all his bitcoin… and ended up with a $500,000 profit after taxes, volatility, and solvency issues with the Mt. Gox exchange.

That kind of money in your bank account could make a real difference in your life… especially if you’ve got a young family, as Tom did.

It’s an almost 2,000% return on capital that started with a minimal grubstake.

But here’s what’s so crazy about this story… The surge in bitcoin has been so powerful that locking in even that kind of profit proved to be a mistake.

Had Tom just held on to his bitcoin… his investment would be worth more than $30 million today.

Last time, he felt convinced about a big trade in 2011 with bitcoin.

Today, his conviction’s in a special situation in the gold market.

Tom is so convinced gold is going to be the best investment over the next several years, he put his entire life savings into gold two years ago.

Now, Tom’s a seasoned speculator. We don’t recommend you put all of your money into any one investment. But it shows you the level of conviction Tom has in gold.

He’s also creating a new advisory – Tom’s Portfolio. It will focus on how folks can play the coming rally in gold.

I’ll tell you more about it in future updates. Meantime, you can catch up on Tom’s big-picture take on gold here.

Like I mentioned up top, Tom is one of those rare investors who can spot a major profit trend early on… so there’s still plenty of time to profit.

And he was one of a handful of investors who saw value in bitcoin early on… and who acted on that instinct and loaded up.

Even so… he took profits too early… and left a lot of money on the table.

That’s why it’s so important to have a long-term time horizon for crypto.

You can earn millions of dollars in crypto from small grubstakes. As we like to say, cryptos are the perfect asymmetric bets.

But you have to stay in the game to earn the really big rewards. Teeka…

To make a fortune, all you have to do is take small positions, be patient, and let the momentum of this massive trend propel us to new highs. Know that this space will be volatile. But so long as you position-size properly, you’ll be able to stomach it.

So be rational and be ready – because your life is about to change in ways you can’t imagine.

If you didn’t catch his live crypto briefing last night, go here to hear it all directly from Teeka.