Chris’ note: I’ve been urging you to own some gold in your portfolio since we created the Cut for all Legacy Research readers back in August 2018.

That’s worked out pretty well so far. Gold is up 45% since then. But colleague Tom Dyson believes the gains are only getting started. It’s all down to what he says is gold’s “destiny.”

Tom is so convinced gold is headed higher, he’s put $1 million of his own money on the line. And on Wednesday, May 20, he’s holding a special briefing on what he says will be the biggest moneymaking event over the next 20 years.

Make sure to secure your spot here. Then read on below for more on what gold’s destiny is… and why Tom is convinced that now is the time to buy.

The most important trend in finance is the decline in the Dow-to-Gold ratio.

The Dow-to-Gold ratio tracks the 30 Dow stocks as priced in gold.

When it goes to extreme highs, it tells us to sell stocks and buy gold. That’s when stocks are expensive and gold is cheap.

It also tells us the best time to sell gold and get back into stocks. That’s when gold is expensive and stocks are cheap.

And as I’ll show you today, the ratio’s signaling that right now is a great time to buy gold.

Take a look for yourself…

In other words, it took 42 ounces of gold to buy a share of the Dow Jones index.

That was a great time to buy gold and sell stocks. Following the dot-com bust, the Dow crashed by as much as 38%.

After a spike like this, the ratio begins what Legacy Research cofounder Bill Bonner calls its “rendezvous with destiny.”

It falls to where it always ends up – around 5.

These extreme lows mean gold is so expensive you can buy the Dow with about five ounces.

Let’s call this the “primary trend.”

But along this primary trend, the Dow-to-Gold ratio got waylaid. As you can see, it spent eight years backtracking.

Now, finally, this most important trend in finance is back “on.”

To my mind – and for my money – it’s presenting the biggest opportunity to profit since, well… I found bitcoin in 2011.

Why I Went “All In” on Gold

I left my job two years ago. My ex-wife (Kate) and I sold all our things. And we hit the road with our three kids. Over 18 months, we visited 29 countries on four different continents.

We didn’t have anywhere to live. We homeschooled the kids.

We left the “matrix” in another important way, too.

When we left the U.S., we drained our bank and retirement accounts of cash. And we converted our savings into gold and silver.

Why did we do this?

We don’t want to be in the system anymore. It’s unbalanced and unstable.

So we’re sitting on the sidelines, in precious metals, until it’s safe to return to the financial system. When it’s finally safe, we’ll sell all our gold and invest in the top dividend-raising stocks.

Our money will stay there – I hope – generating bigger and bigger dividends for the rest of our lives. (More on this in a moment.)

How will we know when it’s safe?

When the Dow-to-Gold ratio drops below 5.

Six Trades in a Century

I love the simplicity of my strategy…

You buy stocks when they are cheap relative to gold, when the Dow-to-Gold ratio falls below 5.

Then you sell stocks and return to gold when stocks become expensive again, when the Dow-to-Gold ratio goes above 15.

Over the course of the last 100 years, you would have made only six trades.

The chart below shows it all. The towering peak in 1999 (stocks were hugely overvalued). The countertrend rally from 2011 to 2018 (as stocks outdid gold again).

And, if you look carefully, a recent reversal, as gold started to outperform stocks again (the falling line at the right end of the chart below). 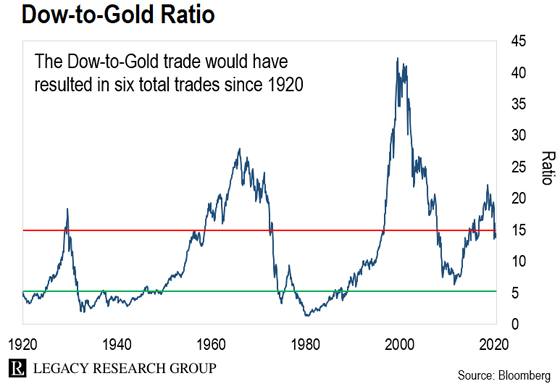 I interpret this recent reversal as the Dow-to-Gold’s primary trend reasserting itself.

Gold is getting back on track. And the ratio is once again marching back down towards single digits. 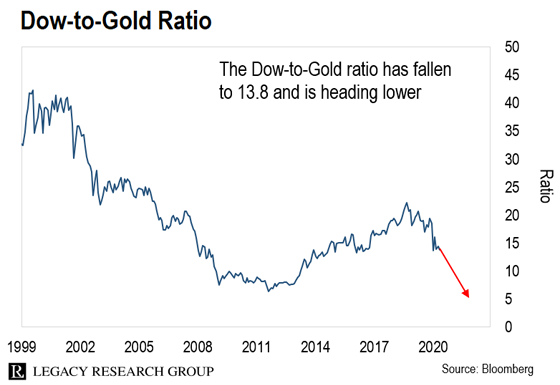 The ratio topped out at 22.36 in October 2018. It’s been falling since… and I speculate it’s about to head much lower.

Of course, if I’m wrong, and the Dow-to-Gold ratio isn’t ready to resume its primary trend lower, that will become clear.

Instead of continuing to fall, the ratio will rise above 22.36, making a new high and invalidating the downtrend.

The ratio likes to move in big, clear trends. And once one of those trends is in motion, it tends to stay in motion.

The ratio’s drop in 2018 told me that gold would start outperforming the stock market… possibly for as much as the next five or 10 years.

As I mentioned up top, I immediately drained my bank and retirement accounts. I put everything into gold and silver. Then I started nagging my friends and family to do the same.

My hypothesis is that the ratio is now back on its way to somewhere below 5. That will complete its rendezvous with destiny.

I will hold my gold until then, at which point I’ll sell it all and invest the proceeds into the stock market.

Specifically, I will buy what I call “corporate aristocrats.”

These are stocks such as Coca-Cola, Johnson & Johnson, and AT&T. They have decades-long track records of relentlessly raising their dividends.

There are no better passive investments than stocks like these. You get rich twice this way. Once from the rising dividends. And a second time from the compounding effect of reinvesting these dividends.

There is no better way to grow wealth.

But until it’s time to buy these corporate aristocrats, I’m sitting in gold, where I will remain until stocks are ready to beat gold again.

If I’m right about this – and if I time my zigzag right – my family will never have to worry about money again.

I have so much conviction in this idea, I invested nearly $1 million of my own money into this strategy.

And on Wednesday, May 20, I’m sharing all the details of my strategy in a special briefing. It’s something many of my readers have asked for since I started banging the drum on gold. As you’ll see, there’s much more to it than just buying bullion…

To make sure you don’t miss it, reserve your spot right here.