“We’re still in the early, foundational stages of the rally”…

I was talking about my favorite precious metal – gold.

Gold had just leaped over the $1,500 mark for the first time in two years.

And our go-to gold investing expert, Dave Forest, was pounding the table on how the rally was only getting started. As I wrote at the time…

Gold is already up 17% this year alone. But the speculators have yet to jump in and run up prices too far.

That tells us we’re still in the early, foundational stages of the rally. And that’s when you want to get in.

But that’s chicken feed compared with the gains on a special type of gold mining stock Dave has been delivering in our International Speculator model portfolio.

And there’s still time to profit.

First, if you’re a new reader, welcome aboard…

Each week, thousands of folks like you become Legacy Research subscribers for the first time.

They’re searching for insights into how to beat the market… and build lasting wealth… they know they won’t find in the mainstream media. So they turn to us… and the alternative moneymaking ideas we publish.

In particular, we hunt for market megatrends the mainstream has yet to wake up to.

Standout examples include Teeka Tiwari recommending bitcoin in 2016 ahead of a 4,340% run… Nick Giambruno recommending legal cannabis stocks in 2017 ahead of a roughly 650% run… and Jeff Brown recommending gene-editing company CRISPR Therapeutics before it ran up about 330%.

And gains on the way in the gold market could make even these wins look tame by comparison.

There are lots of fundamental reasons gold is headed higher…

I bang on about them all the time here at the Cut. So I won’t revisit them here today.

But if you’re new to the conversation, make sure to catch up here and here for more on them.

Today, I want to restate a simple… but hugely important… point.

Gold tends to zig as stocks zag. That keeps your profits rolling in a crisis. As Dave explained it in these pages last August…

Gold is a good place to invest in before and during crises. In our research, gold outperformed all the other precious metals. It tends to perform really well ahead of financial crises. For example, gold had a huge run in 2007 and 2008, rising over 50% in under 12 months.

So gold is a perfect place to hide if you think there’s a crisis on the horizon. You could make a lot of money in the period leading up to the crash. If you sit on the sidelines, you’re going to miss that.

Starting in March, we got a crisis in the form of a global pandemic.

Dave didn’t see the virus coming. Nobody did. But it didn’t matter. Dave’s gold stock recommendations have done exactly what he predicted they would do when the next crisis struck. They’ve surged higher.

Take the three most recent profit alerts Dave sent out to our paid-up International Speculator subscribers.

Dave is a trained geologist with more than two decades’ experience in the mining industry. His mission at International Speculator is to uncover junior mining companies that have the potential to double or triple in 12 to 24 months.

That’s what he’s been doing… over and over again. Here’s the good news Dave shared with his subscribers on June 22…

Our latest portfolio addition, American Pacific Mining (USGD.V or USGDF), surged back to C$0.38 [Canadian dollars] today. That puts us up 192% from our entry price of C$0.13. That was just 41 days ago, showing you how fast these stocks can move.

American Pacific Mining is a Canadian gold exploration stock Dave added to the model portfolio on May 12.

It’s now a Casey Free Ride in the model portfolio. Dave advised his readers to sell enough shares to cover their initial stakes and take a free ride as shares continue to shoot higher.

This is now an all-upside, no-downside speculation. And it continues to surge.

He also updated them on another gold exploration stock in the model portfolio, Liberty Gold (LGDTF).

The company operates a gold mine in Idaho called Black Pine. It had just gotten back positive metallurgical results. And its shares were blasting higher. As Dave wrote in the same profit alert…

Then two days later, on June 24, Dave updated his readers on another gold exploration stock that was popping, Vizsla Resources (VIZSF).

The company is rebooting a centuries-old silver district in Mexico. It had just announced a major discovery of silver and gold. And its stock skyrocketed 66% – in a day.

To put that in context, the average daily move for bitcoin is 2.6%. The most bitcoin has spiked in a single day since it began in 2009 is 42%.

But Dave saved the best news for last…

Last Tuesday, he sent a third profit alert to our International Speculator readers.

He told them that Vizsla Resources was up more than 100% since he recommended it on April 20.

He also updated them on the top gainer so far in the model portfolio. It’s another Canadian gold explorer, Azimut Exploration (AZMTF). As he wrote…

Yesterday, Azimut said the initial drill holes from the new program are encouraging. The company is seeing mineralization, including visible gold. Investors are piling into the stock. […]

At the peak price today, we’re now up 922% [since October]. This is very likely going to be our first 10-bagger of the current cycle.

As I said up top, these are the kind of gains that folks are more likely to associate with cryptos than gold stocks.

So kudos if you acted on Dave’s recommendations…

They had the potential to move the needle on your wealth in a meaningful way.

And if you’re now taking a free ride, you no longer have your original cash investment at risk. So you can put it to use in new speculative opportunities.

That’s the highest level it’s traded at since July 2011.

Remember, gold mining stocks are leveraged to the price of gold.

So they give you extra oomph over the price of the physical metal. When gold or silver goes up by 1%… precious metals mining stocks go up by more than 1%.

The “juniors” – the smaller explorers hunting for new discoveries – are even more leveraged to the price of gold than the majors.

Junior mining stocks are so speculative, Legacy cofounder Doug Casey calls them the most volatile stocks on Earth.

Dave and his team compiled a timeline of the biggest junior discoveries of the last 35 years.

These are companies that found massive deposits of gold, copper, and nickel. Take a look… 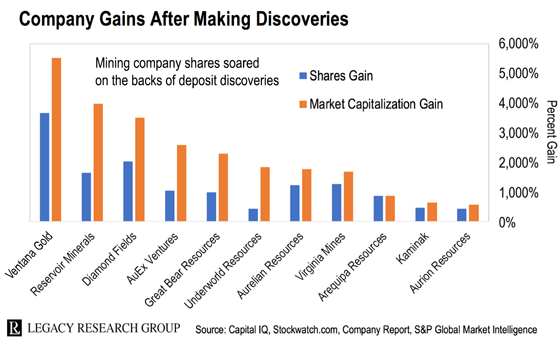 Shares of mining companies (blue bars on the chart) shot up thousands of percent on the backs of these discoveries.

But if you want to “test-drive” International Speculator… and access the full list of Dave’s junior gold stock recommendations… you can find out more here.

As a second-best option, you can invest in a broad basket of junior gold mining stocks by way of the VanEck Vectors Junior Gold Miners ETF (GDXJ).

This won’t give you the same kind of reward potential Dave gives his readers on best-in-breed junior miners. But it’s the next best thing.

Just remember, don’t bet the farm on a single trade. Gold stocks are highly speculative. Don’t ever invest more than you can afford to lose in speculations like these.