Chris’ note: 5G is one of the tech megatrends on our radar here at the Cut. It’ll revolutionize the way we communicate. It will also make a suite of sci-fi technology – such as self-driving cars, augmented reality, and artificial intelligence – possible at scale.

And as you’ll see in this new presentation from Casey Research senior analyst John Pangere, a new breed of tiny 5G stocks is going to take off as a result. So check that out here.

Then read on below for details of John’s recent “live test” of a 5G antenna in downtown Denver. It led him to discover a 5G secret nobody is talking about…

Nobody seems to notice the green metal pole on the corner of 17th Street and Glenarm Place in downtown Denver.

It’s one of dozens of such poles around the city.

It looks like a lamppost. But there’s no lamp… 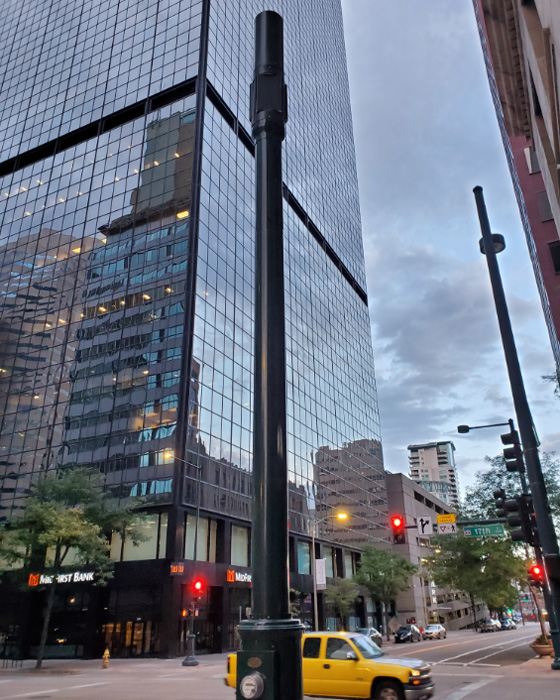 I recently traveled to downtown Denver to investigate the 5G megatrend for my readers.

And what I discovered was shocking…

If you have a 5G smartphone, this pole gives you download speeds up to 100 times faster than what’s available across our current 4G networks.

But there’s a fatal flaw. And 5G won’t take off until this problem is solved.

Today, I’ll show you what that flaw is. I’ll also show how you can profit from it.

But first, let me tell you why it’s so important you pay attention to 5G in the first place.

About 2.7 billion people around the world use smartphones.

And about 5 billion people have some sort of mobile device using one of the nearly 9 billion wireless internet connections worldwide.

Swedish telecom company Ericsson estimates that, by 2022, we’ll have about 29 billion devices connected to the internet.

We’re addicted to our devices…

And as we demand more services that require more data… our wireless networks are struggling to keep up with that demand.

For instance, the new generation of smartphones is loaded with ultra-high-definition capability. It’s what you’ll see called 4K. Streaming a movie in 4K requires four times the amount of data current phones can handle. It also maxes out the capacity of 4G networks.

But 5G can handle this new demand. That’s why we’re seeing poles like the one in Denver pop up in cities across the country.

2G enabled calls and basic text messages. 3G allowed you to send a photo to a friend… slowly. With 4G, you can watch YouTube and Instagram videos.

You can also download movies. But it takes a lot of time and data.

With 5G, you can download an HD movie… in seconds.

I imagine you’re skeptical. So was I. That’s why my colleague and I decided to test out 5G ourselves…

For our field test, I got a brand-new Samsung Galaxy S10 5G smartphone. As I stood next to a green pole in downtown Denver, my phone connected to 5G.

We wanted to compare its performance to a 4G iPhone.

I downloaded Gone With the Wind onto both phones. This movie is nearly four hours long.

You can watch a video of part of the experiment below, featuring my colleague David Forest.

Find one of the top picks to profit from the 5G revolution here.

So why is 5G so much faster?

The short space between the arcs allows 5G to pack more data into a signal than legacy networks. And it reduces latency.

Latency is the time it takes for a signal to travel from sender to receiver. The lower the latency, the faster the network.

This is the power of 5G. But even with this capability, there’s one obstacle holding it back…

Once you walk just 50 or 100 feet away from any of the green poles dotting downtown Denver, the 5G signal disappears. And you’re back on regular 4G.

The powerful 5G signal can’t cover a wide area like 4G can.

Most people still don’t understand it. But 5G phones work only when you’re in sight of one of the 5G antennae – those green, lamppost-like poles. In Denver, that meant standing on the sidewalk right beside one during the Gone With the Wind experiment.

In fact, if you walk inside a store, the signal disappears. This is the fatal 5G flaw.

5G won’t become widespread until this issue is solved.

The good news is there’s one small company that’s already come up with a brilliant solution to this problem.

It’s called the “Master Key.” And shares of this company could skyrocket as its “Master Key” helps 5G become a reality. Go right here to learn all the details.

Another way to get exposure to the 5G revolution is to invest in semiconductor makers.

For movies to download in seconds… pacemakers to talk to hospitals… and driverless cars to scan the road and make rapid decisions, many other devices have to be involved.

That means demand for the semiconductors – or chips – that run them will skyrocket.

As 5G spreads to more and more devices, they’ll be crucial to ensuring any new tech works on the 5G network.

So also consider buying shares in something like the VanEck Vectors Semiconductor ETF (SMH). It holds a basket of the world’s leading chipmakers. So it’s set to profit big time as this tech megatrend rolls on.