“A historic day for gold…”

That’s how our globetrotting geologist, Dave Forest, put it to his readers yesterday…

Gold continued its breakout this morning, leaping above $1,500 per ounce in early trading. This is the first time since 2013 that gold has reached this level.

You can see gold’s impressive gains in the chart below. 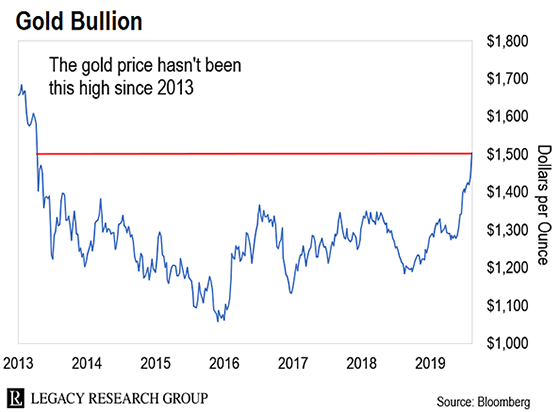 Gold is already up 17% this year alone. But as you’ll learn in today’s dispatch, the speculators have yet to jump in and run up prices too far.

That tells us we’re still in the early, foundational stages of the rally. And that’s when you want to get in.

But before we get to that, congratulations to longtime International Speculator subscribers.

They got in on this trend ahead of the pack…

Since it entered the model portfolio in October 2016, Dave’s paid-up subscribers have had the chance to book 215% gains.

Another top-tier gold producer in the International Speculator model portfolio is up 52% since March. And in the last week alone, it’s up 28%.

And Dave sees more upside for gold as storm clouds continue to gather over stocks.

As we showed you yesterday, you want to own gold in a bear market on Wall Street. It tends to rise as stocks fall.

As Dave explained it…

Gold is a good place to invest in before and during crises. Based on our research, gold outperformed all the other precious metals. It tends to perform really well ahead of financial crises. For example, gold had a huge run in 2007 and 2008, rising over 50% in under 12 months.

So gold is a perfect place to hide if you think there’s a crisis on the horizon. You could make a lot of money in the period leading up to the crash. If you sit on the sidelines, you’re going to miss that.

That’s why, in the International Speculator portfolio, Dave has a basket of the world’s most explosive gold stocks.

These stocks are primed to rip even higher as the rush into gold continues.

Like I (Chris) mentioned up top, we’re still in the early stages of the rally.

That’s according to another one of our go-to gold experts here at Legacy Research, E.B. Tucker.

Regular readers will know that, like Dave, E.B. is a gold industry insider. He sits on the board of a gold mining company. And before joining Legacy, he comanaged a precious metals fund that invested in gold mining stocks.

Last August in these pages, E.B. called the bottom of the last gold bear market.

Gold miners were deep in bear market territory. Sentiment was at rock bottom. But E.B. – always a contrarian – said gold was headed higher.

It’s all in this chart… 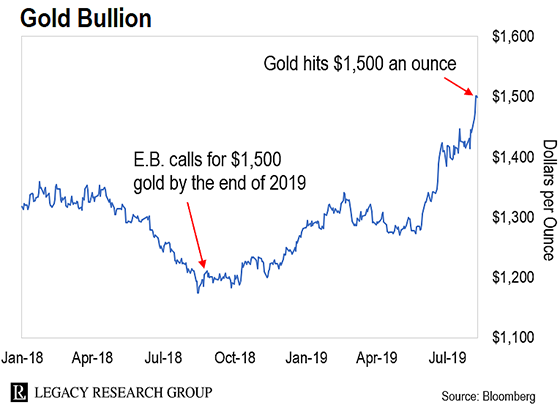 And E.B.’s been setting up our Strategic Investor subscribers for big profits.

E.B. says the rally has a lot more room to run…

It’s down to how different types of gold mining stocks have performed so far in this rally.

As I’ve been showing you, gold stocks give you extra oomph over the price of the physical gold.

The majors are bigger, more established companies. They have predictable cash flow and several productive mines.

But the juniors – the smaller companies chasing new discoveries – are even more leveraged to the price of gold than the majors. That means bigger, faster profits… but they also come with added risk.

In fact, juniors are so speculative, Legacy Research cofounder Doug Casey calls them the “most volatile stocks on Earth.”

It’s why, in a late-stage speculative boom, you typically see the juniors double the performance of the majors.

Take the VanEck Vectors Junior Gold Miners ETF (GDXJ). It’s a fund that tracks big junior gold miners. Since the start of June, when the gold rally really took off, GDXJ is up 44%.

Compare that to the VanEck Vectors Gold Miners ETF (GDX), which tracks the gold majors. It’s up 38%.

The junior gold mining stocks are barely outperforming the majors right now. Here’s E.B. with more of what that means for future gold prices…

The juniors are the stocks people tend to speculate on because they think they’re going to go to the moon. So in a speculative boom you typically see the juniors surge ahead of the majors.

That’s why today’s setup is so attractive, even if you haven’t yet bought some gold. The muted performance of the junior mining stocks shows speculators haven’t jumped in yet.

The serious money – money from professional investors, institutions, and industry insiders – is flowing into the majors. That’s lifting prices. But it’s nothing compared to the rally we’re going to see when the speculators join in.

That’s why we’ve been urging you to get some gold exposure since we launched The Daily Cut last August.

E.B. and Dave say you want to start with physical gold (coins and bars). It still gives you a lot of upside potential… but your downside risk is limited.

Plus, as we covered yesterday, physical gold is also a great way to protect yourself in a bear market on Wall Street.

It’s the ultimate safe-haven asset. You buy it. Store it. And treat it as real wealth.

By that, I mean gold’s value does not depend on someone else’s promise to pay. The same can’t be said for the value of stocks, bonds, and U.S. dollars…

But E.B. and Dave also recommend adding some gold stocks to the mix for even more upside.

Just remember that leverage goes both ways – on the upside and the downside.

So treat mining stocks as speculations. Invest only small amounts in them… and don’t invest money you can’t afford to lose.