Looking through your messages this week, gold and bitcoin are still at the top of your minds.

And it’s no wonder…

This chart shows the performance of gold and bitcoin versus U.S. stock market bellwether the S&P 500 and the tech-focused Nasdaq-100 Index. 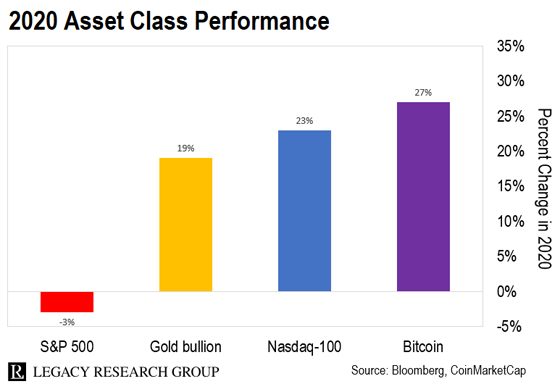 Finally, there’s bitcoin, the cryptocurrency folks in the mainstream press like to write off as dead every couple of months or so.

And Legacy readers are making money as these rallies continue.

That’s a 2,069% gain for folks who acted on Teeka’s recommendation.

Meanwhile, as we covered in more detail here, Dave Forest has been racking up crypto-like gains in tiny gold exploration stocks over at International Speculator.

Top open recommendations there include a 753% gain on Azimut Exploration (ASM-V)… a 244% gain on American Pacific Mining (USGD-CN)… and a 194% gain on EMX Royalty (EMX-V).

And Dave’s readers aren’t the only ones cashing in on the gold rally.

These shares have more than doubled in value since Nick added them to the Crisis Investing model portfolio in February 2019.

(Note that these stocks are all above Dave’s and Nick’s buy-up-to prices, so they’re not current recommendations.)

And as you’ll see in the new presentation he’s put together… Nick believes a brazen government swindle will send gold rocketing higher from here.

Now, over to our first reader question…

Reader question: I think gold and bitcoin still perform. So if my allocation to gold is 10%, what about the other 90%?

Chris’ answer: Thanks for your question, Fredrik. It’s our view here at the Cut that gold and bitcoin have a role in any sensible long-term wealth-building plan.

For the rest of your portfolio, I recommend you place a strong emphasis on diversification. The more diversified you are, the less any single event – like a stock market crash – can hurt you.

Academic studies have shown that your asset allocation decisions – not the stocks you pick – account for more than 90% of a portfolio’s long-term returns.

It’s why I’ve spilled so much ink on why you need to put asset allocation front and center on your radar.

But to get back to your specific question, there are different ways to split up your “eggs ”…

The mainstream version is to divide your portfolio 60/40 between stocks and bonds. 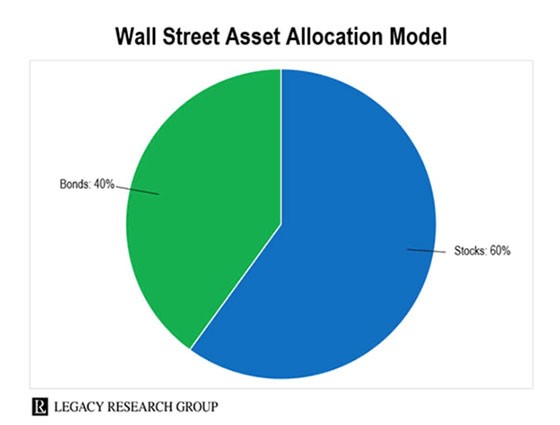 But as colleague, former hedge fund manager, and Palm Beach Letter editor Teeka Tiwari showed in these pages back in March, that model is now outdated.

Teeka says it’s better to include a wider range of assets in your portfolio. Here’s the recommended model he and his team put together for our Palm Beach Letter folks… 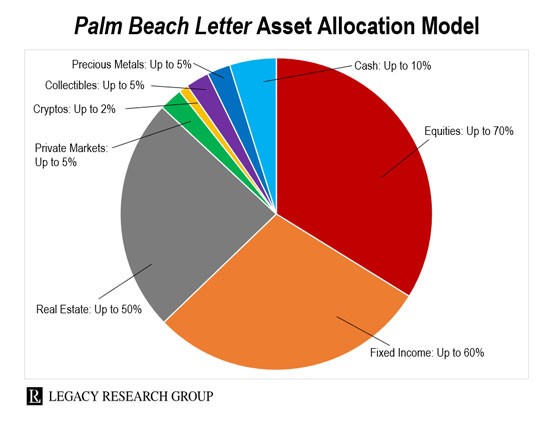 He says it’s the reason for the success of The Palm Beach Letter model portfolio.

The Palm Beach Letter launched on April 13, 2011. And through June 30, 2020, the model portfolio averaged annual returns of 108.4% (which Teeka had verified through a third-party verification service).

Over that time, the average annual return for the S&P 500 was 14.7%. So you would have done almost 10 times better with Teeka’s diversified approach.

That’s because everyone is different. Exactly how you split your wealth is up to you.

If you’re a younger investor, with a higher appetite for risk… you might want to max out your stock and private market allocations. If you’re more conservative, you might opt for more real estate, cash, and bonds…

What’s important is that you follow an asset allocation plan of some sort.

Switching gears, several of Teeka’s readers got in touch this week to ask if the feds are about to turn the screw on cryptocurrencies…

Reader question: Hi, Teeka and team, can you comment on how you see U.S. Senate bill 4051 affecting cryptocurrency? Thanks!

Reader question: Please pass along to Teeka and his team. I’d like to hear his thoughts regarding Senate bill 4051, the “Lawful Access to Encrypted Data Act.” I’ve read that if this becomes law, it may become illegal for U.S. citizens to hold cryptocurrencies. Naturally, I’m very concerned about the impact on our crypto portfolios.

Teeka’s answer: Hi, Steve and Alfredo. Thanks for writing in. This bill is alarming. It looks to create a “back door” – or entry point – for the feds in online messaging services that are end-to-end encrypted and have 1 million users or more a month. And for services with fewer than 1 million users, it lays out rules that “help” the companies comply with the back door.

As the name suggests, you can’t eavesdrop on end-to-end encryption. The messages are encrypted before you send them. And only the sender and the receiver have the cryptographic keys to decrypt them. So it’s a headache for government agencies that want to snoop on your messaging traffic.

Right now, the bill has only been introduced in the Senate. It hasn’t been assigned to a committee or voted on. So there is a long way to go. Also, it doesn’t have bipartisan support. So it has a steep hill to climb to gain approval.

Most important, there’s no mention of cryptocurrencies or digital assets in the bill. It targets encrypted messaging apps, such as Facebook-owned WhatsApp. Given that… and its lack of support… I wouldn’t lose sleep over this bill as a crypto investor.

To wrap up today’s mailbag edition, we turn to a debate that’s been raging among readers of Bill Bonner’s Diary.

As his regular readers know, Legacy Research cofounder Bill Bonner takes a long view of history. And this week, he’s been wondering what the conflict over taking down historical statues says about America in 2020.

In Tuesday’s Diary, Bill remarked that even great nations have life cycles. He quoted the 19th-century English poet Lord Byron…

They begin with freedom, then move on to glory, wealth, vice, corruption… and finally barbarism.

So where does that leave the U.S. right now? Here’s Bill with more…

You can tell where you are in the cycle based on whether the monuments are going up or coming down. They go up when a nation celebrates its heroes. They come down when it turns on its old gods and sinks toward barbarism.

Bill’s readers responded with a flood of feedback…

Let’s continue to celebrate our heroes of the past – statues, monuments, and all – while recognizing that they were flawed human beings like us, and products of their time and context. They should not be compared with a utopian vision of 2020. Explanatory displays can be added beside monuments to give a more balanced assessment that fits our current context… without removing the memorials themselves.

They could not imagine a place where justice and righteousness shall flow like a stream, as the good book and Dr. King said.

Unfortunately Bill is right on! The good ole U.S.A. is gone and, like Bill’s friend Doug Casey suggests, it’s irreversible.

There is nothing “united” about the United States anymore. I dare say that we are as divided a nation as we have ever been. The halcyon days are over, but I sure pine for them.

As with the Romans, corruption and societal breakdown lead to overthrow from outside (or perhaps inside). As America divides itself and abdicates its role as an international leader, here comes China.

China has retained its empire through the millennia and is now reinventing itself as the predominant force in the world. This is an exciting and critical time to make the right choices for the preservation of our planet and species.

Now, with 7.8 billion humans on the Earth, we turn a blind eye to reality at our peril.

Is the U.S. empire on its last legs, as Stephen A. worries? Should America “turn on its old gods,” as Bill puts it?

Thanks to everyone who wrote in… and everyone who’s reading along with us each week. It’s always interesting to get your great feedback… and we look forward to more.

Keep it coming at [email protected].