Chris’ note: Last week was the worst for U.S. stocks since the 2008 financial crash. And they tanked again yesterday, despite an emergency rate cut by the Fed. This has prompted folks to ask what they can do to protect their wealth.

Our answer remains the same. The key to building wealth – and keeping it – is making sure you always have a diversified portfolio. The more diversified you are, the less one single event (like a stock market panic) can damage your wealth.

That’s why, today, I’m sharing with you an insight from 15-year Wall Street veteran and colleague Teeka Tiwari. As he reveals below, Wall Street’s diversification advice is dangerously out of touch.

But Teeka and his team have developed an alternative strategy. It does a better job of protecting your downside. And you won’t have to give up your quest for life-changing gains, either.

Now, over to Teeka…

Along the way, I learned many of the Street’s secrets to making large amounts of money.

But I also discovered a sad truth. Much of Wall Street’s wealth-creation machine comes at the expense of its customers.

You see, Wall Street has a slavish devotion to recommending only stocks and bonds.

And the only reason it focuses on these two asset classes is it can easily charge fees on these products.

Traditionally, Wall Street recommends investors put 60% of their investable wealth in stocks… and the other 40% in bonds. It’s called the 60/40 portfolio.

But at The Palm Beach Letter, we’re not bound to mainstream brokerage houses and investment banks. And we never receive compensation for anything we recommend.

So we don’t care what an investment pays its promoters. We care only about what it could pay our subscribers.

Not being bound to hidden interests gives us tremendous freedom to pursue our own independent research to find ideas outside the mainstream.

And one of the most important ideas I can share with you is asset allocation.

I get it… Asset allocation isn’t the most exciting topic to read about. It’s not sexy like cryptos, private placements, or legal cannabis stocks.

Despite those results, for the first time since 2011, I recently overhauled The Palm Beach Letter asset allocation model.

Today, I’ll tell you why…

The 60/40 model has been around forever.

Wall Street designed this model for senior investors with sizable nest eggs. And it’s done its job. Over the past decade, it’s done exceptionally well.

So a buy-and-hold investor in a 60/40 portfolio averaged over a 10% return this past decade. That’s well above the long-term average of around 7%.

But that’s in the rearview mirror now. And the future is suspect…

Not only did it forecast low future returns for stocks and bonds. It also said the historical role bonds have played as a hedge for stocks is ending.

Another Wall Street investment bank, Morgan Stanley, expects traditional 60/40 portfolios to post gains of just 2.8% a year over the next 10 years. This would mark the lowest 10-year return for such a portfolio in nearly a century.

Now, I believe the stock market will continue to move higher in the 2020s. And who knows? Maybe bond yields go negative and the prices skyrocket from here. (Bond prices move in the opposite direction of yields.)

The point is, I’ve discovered a way to make more money for my subscribers… while taking less risk… by using an alternative asset allocation model.

I want to make sure we’re in a position to win – whether stock and bond prices zoom higher or just bump along.

I believe the most vital part of building wealth is how your investments fit together into one holistic portfolio.

Studies show that your asset allocation decisions – not the stocks you pick – account for more than 90% of a portfolio’s long-term returns.

That’s how we crushed the market over the past decade with much less “volatility” (dramatic swings up and down) at The Palm Beach Letter.

But as we move into the new decade, it’s time for a change. So I had my team come up with a new asset allocation model.

We researched each of our asset classes. We went over every position in our portfolio.

We also studied the return forecasts from dozens of major financial firms.

We did all this to create a new model we believe will outperform the market over the next decade – just like we did this past decade. 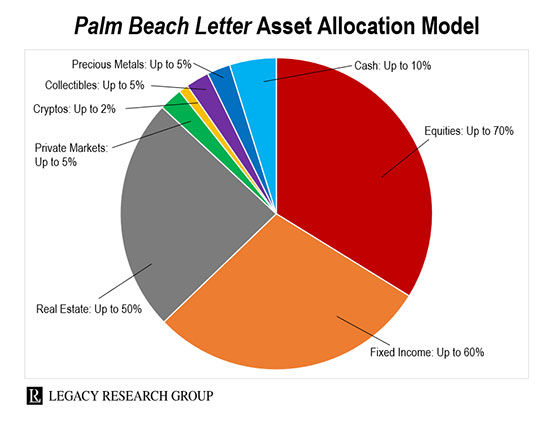 (Note: You’ll notice our suggested allocation sizes don’t add up neatly to 100%. Each individual is unique. So we don’t recommend one-size-fits-all allocations.)

As you can see, our model consists of the following eight asset classes:

You won’t find this level of diversification in any other newsletter in America. And it’s why we’ll continue to beat the market in the future…

Preparing for the Future

Look, I know coronavirus fears have gotten investors panicked. But we’re in the longest bull market in U.S. history.

It’s obviously an extended run. And plenty of naysayers are still predicting a crash. (They’ve been predicting one since 2010.)

But that doesn’t matter…

You see, diversification will generate long-term outperformance and shield your portfolio – even during tough times.

So I urge you to study our new asset allocation model closely. If you follow it, you’ll be prepared for wherever the market goes next.

Chris’ note: When you have a well-diversified portfolio, you’ll always have some investments going up even when others – like stocks – are going down. And that’s the case with one under-the-radar kind of speculation Teeka has been recommending.

Like I said, these speculations still fly under most folks’ radars. And you won’t hear about them on CNBC or in the pages of The Wall Street Journal. But I’ll tell you more about them in tomorrow’s dispatch. So look out for that in your inbox…