Talk about a bounce… 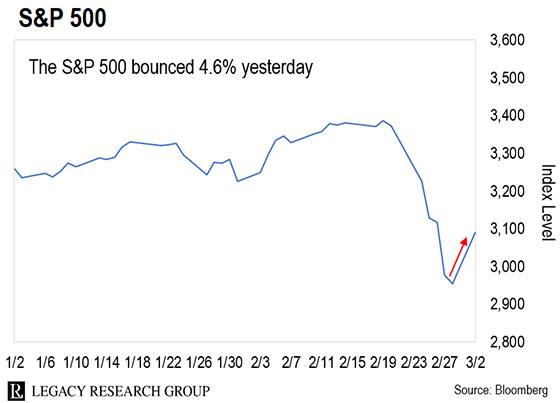 And the Dow gained the most points in a single day in its 124-year history.

The rally was impressive enough to cause TV’s talking heads to claim the sell-off is over.

And today, the Fed weighed in with an emergency rate cut. It took the economy’s key lending rate down half a percentage point to a 1% to 1.25% range.

But as you’ll see in today’s dispatch, master trader Jeff Clark is not so sure it will be enough to keep the rally going.

He’s prepared to sound the all clear only if the stock market passes a specific “test.” And the jury is still out on whether it’ll be a pass or a fail.

If you don’t know him already, Jeff used to manage $200 million in Silicon Valley…

When he turned 42, he’d made so much money for his clients… and for himself… he retired to spend more time with his family.

But Jeff is a trading “junkie.” Early retirement didn’t suit him. So he now heads up the Delta Report advisory.

He specializes in profiting from exactly the kind of whipsaw moves we’ve been seeing in stocks lately. And so far, he’s called the coronavirus panic spot-on.

Last Friday, Jeff told his paid-up Delta Report subscribers to expect a “large gap higher” for the S&P 500 on Monday.

And that’s exactly what happened. But Jeff isn’t confident that the sell-off that began with the spread of the coronavirus last week has run its course.

That’s because the stock market is like a rubber band…

Longtime Daily Cut readers will know what I’m talking about.

It’s something we’ve spilled a lot of digital ink on since we launched this premium newsletter to all Legacy Research readers back in August 2018.

But if you’re new to us, here is Jeff with more…

I have a simple view of the stock market. It’s like a rubber band. Stretch it too much in one direction… and it snaps back. Hard. That’s what we saw yesterday – a monster up day after five days of brutal price plunges.

Heading into last week’s mini-crash, I warned my readers that the proverbial rubber band was overstretched to the upside. Most technical indicators I follow were overbought for a couple of weeks.

The S&P 500 was going up every single day. And you typically don’t see that.

That’s why I picked up the phone yesterday and called Jeff. He’s got one of the best reads on how these whipsaw moves typically play out. And I wanted the answer to what I believe is the $64,000 question right now…

Has the coronavirus panic put a bullet in the bull market? Or will last week’s jolting sell-off be just a blip on the radar?

That’s when Jeff told me about his test…

If stocks pass it, the bull market is still on. And Jeff says he’ll bet on stocks continuing to rise.

If stocks fail it, the bull market has been canceled. And Jeff will take the other side of the trade, and bet on stocks falling.

First, you get a plunge. That’s what we saw last week. This stretches the rubber band to the downside.

Then, the rubber band snaps back… and stocks bounce. That’s where we are now.

And this is when things get really interesting… and you have to pay extra careful attention.

Because now, either one of two things happens…

Either that bounce continues… and the correction peters out. Or the bounce falls apart, and you get more selling.

I’m looking at “resistance” at 3,150 points on the S&P 500. That’s the point I expect pushback from a growing number of investors willing to sell at that price.

If the S&P 500 bumps into this resistance, and fails to break above it, that will put a cap on this bounce. If that happens, we could see declines again on the order of what we saw last week. We could even take out last week’s low of 2,866.

If, on the other hand, the S&P 500 shoots past the 3,150-point mark… and breaks through that resistance… that tells me the bull market is still on. 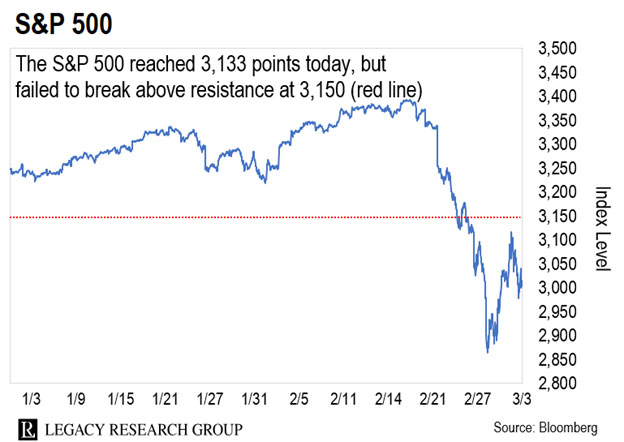 It still may test that 3,150-point mark… and break above it. But right now, it looks as though stocks aren’t out of the woods yet.

This is something we’ll be coming back to in future updates. So keep your eyes peeled for those around 5 p.m. ET daily.

As I’ve been showing you, traders can profit when stocks move either up or down.

That makes them different from regular investors, who can make money only when stocks go up in price.

And readers who follow our trading advisories have had the chance to bag some big wins… even as the stock market has been whipsawing wildly.

Palm Beach Quant uses a powerful trading system that detects patterns based on decades of historical price data to forecast the future price movement of stocks.

Just today, Teeka and the team closed a bullish four-day trade on Abbott Laboratories (ABT) for a 39% gain.

They also closed a three-day trade on the Nasdaq-100 tech index for a 24% gain.

We’ve been warning you that central banks are going to use the coronavirus panic to unleash the next round of monetary madness.

And that’s exactly what we saw today with the Fed’s rate cut. This all points to higher gold prices as investors pile into the metal to avoid the debasement of fiat currencies.