Today, we’re leaving behind the coronavirus panic… and how it’s whipsawing stocks.

If you’ve followed our advice, and you have plenty of cash and gold onboard, you’ll do just fine.

Sell-offs like these are a reminder why you always need to have a sensible diversification strategy… and never bet the farm on stocks.

Today, I’ll show you how one of the most bullish indicators in all of chart analysis is flashing a buy signal in another market entirely.

If history is any guide, gains of 3,000% are easily in the cards. And that would be the low end of the range.

One of the past times this indicator flashed a buy signal, 6,589% gains followed.

If you’re new to the Cut, welcome aboard!

My name is Chris Lowe. I’m your editor. And my mission is to bring you the world’s most compelling investment opportunities.

I do that by plugging you into the latest research, insights, and actionable ideas from experts like Teeka Tiwari.

Teeka – or Big T, as his readers call him – epitomizes the American dream…

He grew up in the foster care system in Britain. But he made his way to New York as a teenager with barely $100 in his pocket.

He flipped burgers. He washed cars. Then, he talked his way into a job on Wall Street by offering to work for free. Later, when he was just 19 years old, he became the youngest-ever vice president at Shearson Lehman.

Then, after nearly two decades working for some of Wall Street’s biggest firms, he went out on his own… and set up his own hedge fund.

He now heads up our Palm Beach Research Group division. And he’s on a mission to mint more millionaires than any other newsletter writer in America.

That’s why he’s so excited that this buy signal has flashed for bitcoin.

Now, I don’t want to get bogged down in technical jargon… but stick with me on this because it’s important. 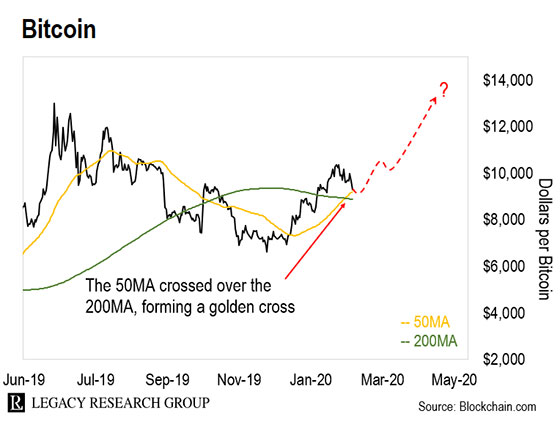 Past Golden Crosses have triggered major runs in other assets. Gold is up nearly 30% since its Golden Cross in early 2019. The Nasdaq has had a similar run since its bullish cross in March 2019.

Over the past eight years, bitcoin has had only five Golden Crosses. If you’d bought after each dip, you could have made an average of 32 times your money… in a little over 12 months.

But here’s the really important thing to keep in mind. Because it fools most people. It hasn’t been a straight run higher for bitcoin after past Golden Crosses.

There’s an important caveat here. Each time this bullish indicator has flashed in the past, bitcoin has dipped lower before shooting higher. It’s understanding this, and buying during this dip, that has made you a killing.

It’s all in this table his team put together…

It shows what came next after the past four times the Golden Cross triggered a buy signal for bitcoin.

This is what’s known as an “asymmetric bet”…

That’s when the potential upside of a speculation far outstrips the downside risk.

And as followers of Legacy Research cofounder Doug Casey know, these are the best kind of bets. Doug…

Amateur investors too often risk 100% of their money in the pursuit of a 10% return. These are horrible odds. But the financially and statistically illiterate take them. You might do better in a casino or most sports betting. It’s one of the key reasons most people struggle in the market.

I’ve always been more attracted to asymmetric bets… where I stand a good chance of making 10, 50, even 100 times the amount I’m risking. I’m not interested in even bets. I’m only taking the field if my potential upside is much, much greater than my potential downside.

As you may expect, there’s a lot more to this story – including two other key catalysts that will propel the boom Teeka says is on the way.

I’ll have more for you on that in the days ahead. Teeka is convinced that with all these catalysts combined, bitcoin and the rest of the crypto market are about to rocket higher.

And when Teeka talks, we listen. The gains he’s helped his readers build from cryptos are unmatched in the history of the financial publishing industry.

He first recommended bitcoin (BTC) to our Palm Beach Letter and Palm Beach Confidential readers in April 2016, when one bitcoin changed hands for $428.

That’s a 2,029% gain for readers who took action on Teeka’s recommendation…

Ether is the crypto asset associated with the groundbreaking Ethereum crypto platform. And it’s up 2,405% since Teeka added it to the Palm Beach Confidential model portfolio.

But don’t worry if you missed out.

If Teeka is right about the massive rally on the way… it’s another chance to make these kinds of life-changing gains.

As his followers know, Teeka is a diehard bitcoin bull…

He’s owned it in his model portfolios for nearly four years. And he intends to hold for the long run.

But he sees an even more lucrative opportunity directly ahead in “altcoins” (alternative coins).

They’re the smaller, more speculative cryptos outside of bitcoin. The simplest way to think of them is as shares in the most exciting crypto projects in the world today.

And after a six-month trip crisscrossing the world… and meeting with his network of contacts in the crypto world… Teeka’s identified five tiny altcoins he believes could turn every $500 into $5 million.

He calls them the “Final Five.” And he’s on the record saying they’re the biggest profit opportunity of his 30-year career.

Yesterday, I told you about a special class of speculations that have been surging lately as stocks gyrate wildly.

The speculations I’m referring to are best-in-breed altcoins.

And he believes the “Final Five” altcoins he has identified are enough to turn $500 into $5 million.

That may sound crazy…

But that’s the kind of gain crypto investors are used to. It’s why there are now an estimated nearly 24,000 crypto millionaires… and nine crypto billionaires… in the world.

For instance, during the 2017 crypto boom, $500 in each of Teeka’s top five picks (peak open and closed gains) could have done just that.

Teeka believes his “Final Five” coins have the same life-changing potential. And to prove it, he’s doing something that’s never been done before in our industry.

He’s chartered a $45 million Gulfstream V private jet. And on Wednesday, March 18, while he’s in the air, he’ll tell folks all about what he’s discovered.

Now, Teeka didn’t charter this jet to show off…

Teeka sometimes flies by private jet on scouting trips for his readers. For instance, he took a private jet to Colombia last April and December to scout an opportunity in the legal cannabis business there.

This time, he’s chartered a jet to take him to where some of these coins are based. He wants to keep the destination and the names of the “Final Five” coins secret until he lands.

These cryptos are so tiny, if they were to leak… they’d go out of Teeka’s buying range within minutes.

That’s why Teeka has done background checks on the crew… chartered the jet under a corporate name… and even removed the jet’s tail number.

On Wednesday, March 18, at 8 p.m. ET, Teeka will take off… and reveal all from inside the private jet.

All you need to do to join him on his adventure… and have the chance to learn the names of the “Final Five” coins he’s identified… is register here for free.