This week, U.S. stock market bellwether the S&P 500 turned positive on the year…

Yesterday, we showed you how investors are so wild-eyed with optimism, they’re rushing into stocks issued by companies that have gone bust.

They’re also piling into stocks with no sales and no earnings. This is the same thing they did at the peak of the dot-com bubble in the late 1990s.

But there’s no euphoria on Main Street…

The coronavirus has taken out large swaths of the economy. Twenty-two million Americans have lost their jobs as a result. And we’re seeing the worst civil unrest since the assassination of Dr. Martin Luther King Jr. in 1968.

This paradox seems irreconcilable at first. How can you have bubble-like behavior from investors as the economy struggles… and protests and riots fill the streets?

The answer is at 20th St. and Constitution Ave. in Washington, D.C…

That’s the address of the Marriner S. Eccles Federal Reserve Board Building. It’s the head office of America’s central bank, the Fed.

You see, we’ve never had such an activist Fed before.

At the worst of the panic selling on Wall Street in February and March, the Fed was digitally printing $1 million a second and using it to buy financial assets.

That’s $90 billion a day – more than the Ben Bernanke Fed was printing at the height of the 2008 global financial crisis.

As you’ll see today, this money gusher is key to understanding what’s going on with today’s seemingly topsy-turvy market action.

That’s going by a broad measure of the money supply the Fed uses called M2. 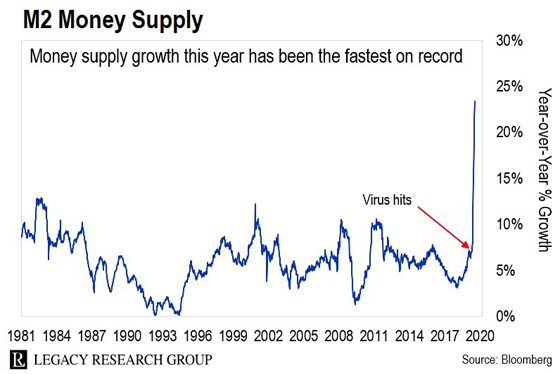 In light of this unprecedented cash gusher, the V-shaped recovery in stocks – and the bubble-like behavior of investors – makes perfect sense.

It’s just a fancy way of describing how the Fed creates new digital dollars and uses them to buy bonds and exchange-traded funds (ETFs).

For instance, the Fed has been gobbling up shares of LQD and HYG – iShares’ biggest investment-grade and high-yield corporate bond ETFs.

This is the Fed’s favorite way to inject new dollars into the market.

And although the Fed isn’t creating as many new dollars as it was at the height of the panic a few months ago, Powell said it would continue to create $120 billion a month… with no end in sight.

As he told reporters…

Powell may have already created more new dollars than anyone else in history. But he’s making it clear that he’s not going to stop there.

In 1987, Andy shot to fame as a gunslinging young trader on Wall Street.

He scooped up $300 million for his employer at the time on a trade against the New Zealand dollar.

At the time, it was one of the biggest gains anyone had made on a single trade. But it wasn’t even the biggest win of Andy’s career.

He went on to earn $1 billion for a speculator client of his on a trade against the old German currency, the Deutsche mark.

And on February 13 – just one week before the market crash began on February 20 – Andy predicted in these pages that a “Black Swan” event would capsize stock and currency markets.

Now, he’s worried about the disconnect between a depressed economy… and exuberant financial markets. Andy…

The only thing that seems to be relevant to the markets is the de facto put option from the Fed.

The 40% economic collapse in the second quarter is irrelevant. So are the 110,000 U.S. deaths from the coronavirus. In the minds of stock buyers, the Fed is going to continue providing support and economic stimulus.

This is causing the distortions we talked about yesterday. (Here’s the link again if you need to catch up.)

You see, QE has one major flaw…

The huge injections of borrowed funds simply pushed up the value of assets like stocks, without the underlying economic growth that should really be driving the stock market.

That’s why the market’s valuations today are truly extraordinary. The P/E ratios – which measure how much investors are paying for each dollar of a company’s earnings – point to fantastic growth rates and an economy that is humming on all cylinders.

They are not discounting an economy that just needed over $5 trillion of emergency bailout spending.

This is why we’re seeing a bubble on Wall Street as Main Street struggles.

Jay Powell is on the case. And the Fed’s money-printing is going BRRR at a record pace.

Our advice remains the same…

In this kind of topsy-turvy market, it’s more important than ever to play defense as well as offense.

You don’t want to sell out of your stocks and speculations. Those could do extraordinarily well in the bubble the Fed is blowing.

But you don’t want to let your guard down, either. One of the most effective defensive strategies is to own plenty of gold. 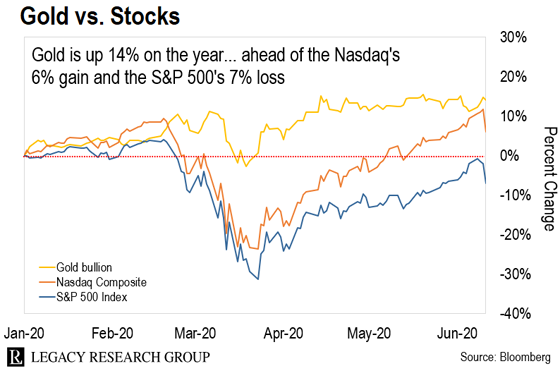 Investors know the Fed can’t print more gold. And they’re turning to it in increasing numbers to protect their wealth from the inflation they fear will follow as the Fed leaves the money gushers open.

If you don’t yet own physical gold, check out my advice on where to start here.