I (Chris) started studying markets as a financial analyst almost two decades ago when I worked for financial news and information company Reuters.

I’ve watched… and written about… just about every important market move since then.

And without doubt, the last three months of market history have been unlike anything I’ve seen before.

Never before have stocks plunged into a bear market so fast. (A bear market is defined as a 20% or more fall from a peak.) Then, following the bear market bottom on March 23, the S&P 500 had its best 50 days in history. 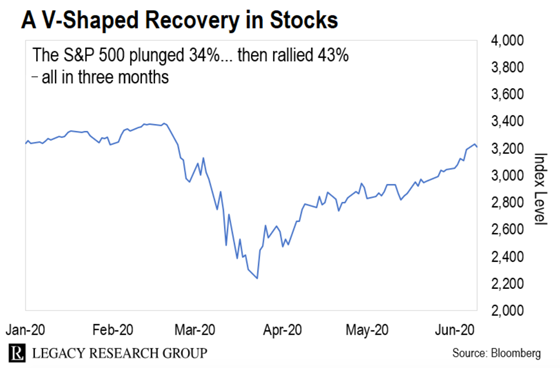 If you’re confused, you’re not alone. As I’ll show you in today’s dispatch, we’re experiencing a bubble in a depression. This has never happened before.

But don’t worry. I’ll also show you a simple strategy for dealing with this kind of schizophrenic market environment. It allows you to make life-changing wealth and avoid getting clobbered… even in the craziest of markets.

The coronavirus has taken out large swaths of the economy…

Since the pandemic began shutting down business in the U.S. in mid-March… 22 million Americans have lost their jobs and not found new ones.

Another 80 million Americans have received relief checks as the feds try to stop the economy from cratering.

And the coronavirus hasn’t gone away yet.

Our tech expert, Jeff Brown, believes the virus will be in the rearview mirror by this time next year. But that still leaves 12 uncertain months to get through before we’re out of the woods.

Right now, the economy is opening up. And there are encouraging signs it’s not leading to a spike in infections and deaths. For instance, in Georgia, which began reopening on April 24, the number of COVID-19 deaths is dropping almost as quickly as it rose in March.

But the truth is nobody knows for sure what’s in store.

Health statistics are deeply flawed. How the authorities count COVID-19 deaths varies from state to state… and country to country. And epidemiology isn’t an easy science.

And there’s still a chance – maybe even close to 50-50 – that things don’t go according to plan. Pandemics have lingered in the past. We can’t rule out new outbreaks… and more stress on the economy.

That’s just the tip of the iceberg…

We also had to deal with a pandemic-induced global supply-and-demand shock… the oil price going negative… a wave of corporate bankruptcies… and the worst social unrest in America since the 1960s.

You’d think investors would be running for the hills.

Stocks have value only insofar as the companies that issue them make profits.

Companies can make profits only if people spend. And people may not be spending as much as before in the age of COVID-19.

This has already shown up in the spread between S&P 500 gains and the earnings from the 500 stocks that make it up. 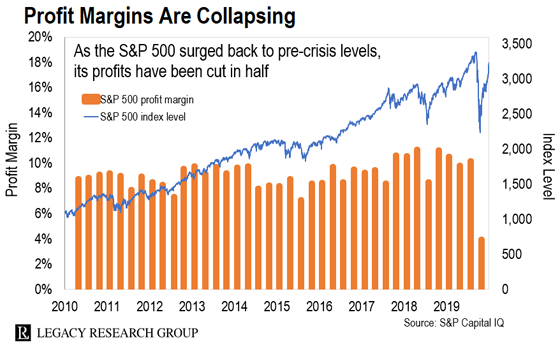 This has left a lot of folks scratching their heads about what’s going on.

Because despite the gloomy economic news, the signs we’re entering a financial bubble are unmistakable.

When companies file for Chapter 11, shareholders are usually in for a rough ride.

That’s because when a company files for bankruptcy protection… it signals that it can’t turn a profit and is about to go under.

In the past, the court process has wiped out shareholders.

Take car rental giant Hertz. It filed for Chapter 11 protection on May 22.

Over the past three trading days, its shares have shot up 577%.

Hertz has been drowning in debt for years. It’s failed to change with the times. And it was hanging on by a thread until the virus finally did it in.

There’s a real possibility that its shares will be worthless, but investors are jumping in.

And Hertz isn’t the only zombie company whose shares are rallying.

You may not have heard of Whiting Petroleum. But it’s a Denver-based oil and gas company that went bust on April 1. Its shares have surged as much as 313% since last Monday.

Investors aren’t piling into shares in just zombie companies. They’re also piling into companies with no sales or earnings.

If you’re of a certain age, you’ll remember the last time this was in vogue was during the dot-com bubble in the late 1990s.

Back in the go-go 1990s, investors piled into internet startups such as Webvan, theGlobe.com, and Pets.com.

EV startup Nikola is developing commercial and passenger trucks using batteries and hydrogen fuel cell technology. Its share price more than doubled since it IPO’d (listed its shares on a public exchange) on June 4. 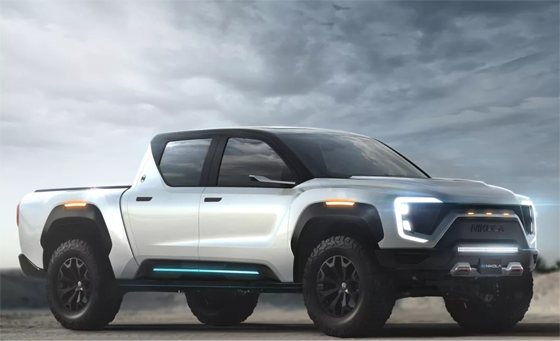 And investors can’t get enough of the company’s shares.

Since it went public, its shares have surged more than 100%. That’s pushed its market value from $12 billion to $28 billion. That’s more than Ford, which is valued at $27 billion.

Now, you might say Nikola’s surge is because the future belongs to EV makers. And as regular readers know, we’re big believers in the EV future here at the Cut.

But valuing a startup with no sales more than a company that’s been around for decades that does sales in the hundreds of billions shows investors are wild-eyed with optimism… just like they were in the 1990s.

Here’s what to do…

These are confusing times. No doubt about it.

On the one hand, we can see the economy isn’t firing on all cylinders. On the other, the stock market is shooting higher.

But that shouldn’t send you into a spin.

Regular readers will be tired of me banging on about it. But if you follow a sensible asset allocation plan, and never bet the farm on stocks, you’ll do just fine.

I believe the most important part of building wealth is how your investments fit together into one holistic portfolio.

Various studies show that over 90% of a portfolio’s long-term returns are driven by asset allocation.

You want to play defense as well as offense…

Cash and gold will protect you in a recession or depression. They’re the bedrock of your portfolio.

Stocks will do well in a bubble. So will smart speculations such as pre-IPO stocks, tiny biotech stocks, legal cannabis stocks, and cryptos.

As long as you follow a plan like Teeka’s, bubble or depression… you’ll know you can sleep easy at night.