Today, I (Chris) have an important update for you on gold…

I can’t count the number of reader emails I’ve gotten about gold lately.

Here at the Cut, I’ve been recommending you own gold as “disaster insurance” for your portfolio to protect your wealth from the coronavirus panic.

But as stocks crashed… gold dipped as much as 6%. 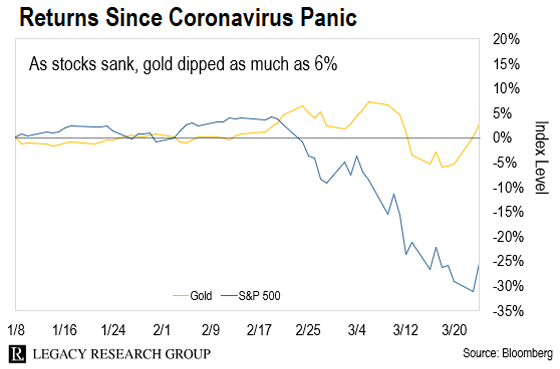 And many of your fellow readers wanted to know why.

Gold is a disaster!! Guys!!! Times have changed; gold is on its way out! We’ll see $800 gold soon. I’ll be watching gold to confirm this prediction.

I love getting feedback that challenges my assumptions.

But today, I’ll show you why Nestor and the other gold naysayers are dead wrong.

That’s not going to happen.

In fact, gold is much likelier to climb $800 from here than fall by that amount.

It’s all down to one thing – the monetary madness on the way.

If you’re new to The Daily Cut, welcome aboard!

My mission is to share with you the top moneymaking ideas from Bill Bonner, Doug Casey, Teeka Tiwari, Jeff Brown, E.B. Tucker, and the rest of the team here at Legacy Research.

But I also keep an eye out for threats to your wealth on the horizon.

And one of the threats I’ve been warning you about is the ramping up of the global experiment in monetary manipulation by governments and central bankers.

Keep in mind… nobody was talking about helicopter money – aka free money from the government – at the time.

Thanks to lockdowns… and virus panic… the prospects for the economy over the next several quarters look abysmal.

We’re in the early stages of an unprecedented demand shock. Wherever I look, I see economic hemorrhaging.

With major portions of the world’s population trapped inside their homes, many sectors of the economy are getting hit very, very hard. This won’t change anytime soon.

Travel, leisure, airlines, entertainment, retail, dining, energy, and commercial real estate are among the sectors that are getting smashed by the coronavirus.

There are even predictions for a 50% fall in GDP in the current (March to June) quarter.

And governments and central banks are going to try to plug the holes with newly created cash.

Since I penned that October 31 warning, the government of Hong Kong has sent the equivalent of $1,200 checks to every citizen.

And President Trump has promised to send every adult American over $1,000 in stimulus checks.

In fact, most major economies either are considering or have already rolled out similar programs. The table below shows how different countries have responded to this crisis. 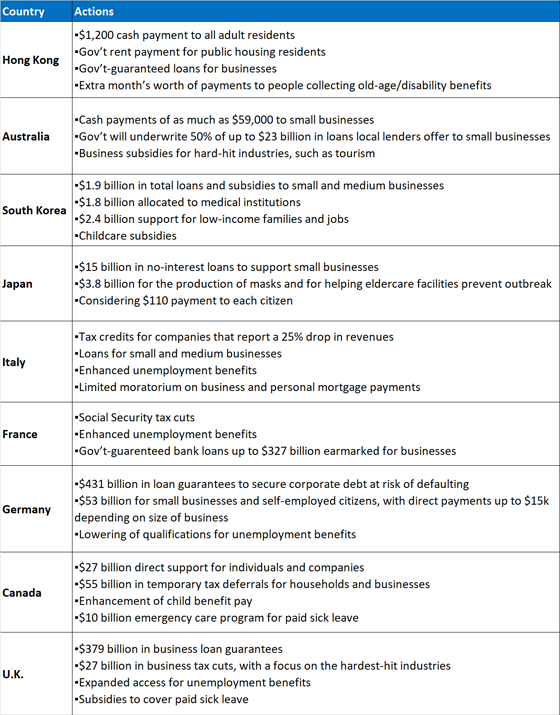 Meanwhile, central banks around the world are slashing rates… restarting emergency bailout programs that shuttered after the 2008 crisis… and buying bonds and other assets under new quantitative easing (QE) programs. 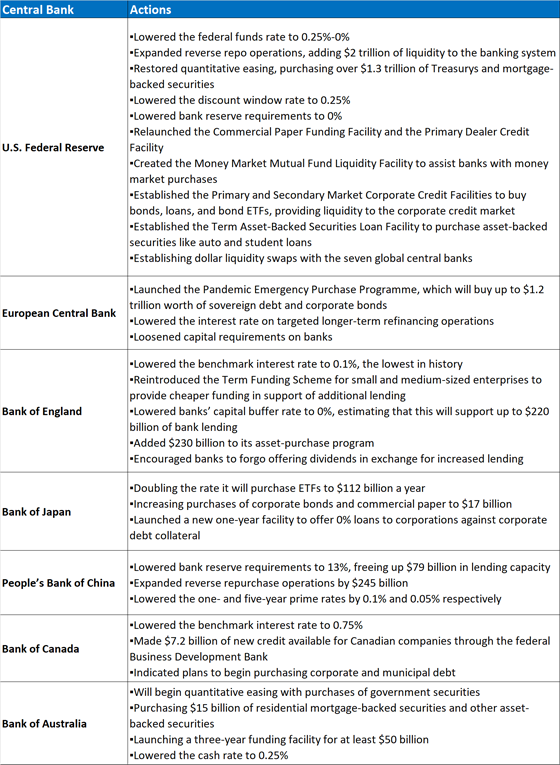 But don’t worry about all the complex central-banker jargon.

Simply put, the feds’ money-printers are going to go BRRR…

This is so obvious to people now… there’s even this meme about it online.

It’s of a red-faced Fed employee frantically cranking a money-printing machine with green dollar bills shooting out of it to heavy-metal music.

You could make this more complicated. But that’s what’s happening at a basic level.

Governments and central banks are saying that the supply of the currencies they issue is infinite.

The supply of gold, on the other hand, is fixed.

Central banks can’t print more of it. Neither can governments. So unless alchemists can figure out how to make more of it, gold preserves buying power relative to rapidly inflating paper currencies.

As we’ve been showing you, there are lots of different ways to own gold.

These include gold stocks and gold-backed exchange-traded funds (ETFs) that you own in your brokerage account.

But when it comes to disaster insurance, the best form of gold is the physical kind.

That’s why, right now, you can’t get your hands on physical gold for love nor money. There’s too much demand for gold bars… and there are too many issues over supply due to the coronavirus outbreak.

As the Financial Times reported yesterday…

Retail investors in Europe and the U.S. have bought up gold and silver bars and coins over the past two weeks in an effort to protect their money from the collapse in global stock prices and many currencies.

But Europe’s largest gold refineries have struggled to keep up because of the region’s widening shutdown. Valcambi, Pamp and Argor-Heraeus are all based in the Swiss region of Ticino, near the border with Italy. Local authorities announced in recent days that production in the area was to be temporarily halted.

Retailers have already reported shortages and delays of up to 15 days on shipments. Markus Krall, chief executive of German precious metals retailer Degussa, said it was struggling to meet customer appetite for gold bars and coins and had to turn to the wholesale markets. Demand is running at up to five times the normal daily amount, he said.

A skeptical market… a flood of government currencies on the way… surging demand for physical gold… and dwindling supply.

Reader Nestor F. may be betting that gold will fall… But I’ve never seen a more perfect setup for a massive rally in the price of gold.

An $800 surge from here may be just the beginning…

More on this… and the shortage in physical gold… in tomorrow’s dispatch.