As we’ve been showing you, every four years, the supply of new bitcoin is cut in half.

The third halving happened yesterday at 3:23 p.m. ET, according to TradeBlock.

Our cryptocurrency expert here at Legacy Research is Teeka Tiwari. He travels the world hunting down the best opportunities in crypto.

He also regularly taps into his network of crypto insiders and billionaires for insights into the most important trends in crypto for our Palm Beach Confidential readers.

And for two months now, you’ve heard him pound the drum on why the halving will trigger the next phase in the crypto bull market.

But if you’re new to the conversation… or if you still have questions… don’t worry.

Today, we’ll cover what the halving is… why it’s so important… and why Teeka believes it’s so bullish for bitcoin.

We’ll also look at how one of the world’s most successful investors is following Teeka’s advice and adding cryptos to his portfolio.

The halving shines a light on a fundamental principle of bitcoin…

The government-issued – or “fiat” – currencies we use day to day (and pay our taxes with) have unlimited supply.

In the U.S., Congress simply has to authorize new spending. Then the Treasury instructs the Fed (America’s central bank) to mark up numbers in bank accounts… or it authorizes the IRS to send out checks.

And commercial banks can simply loan new money into existence. It may sound strange, but all they do is type numbers into an account.

Bitcoin is different. Its supply was programmed into its governing protocol when it was created in 2009.

It regulates supply by issuing new coins as rewards to “miners”…

These are the folks who use high-powered computers to verify new transactions on the bitcoin network.

To get the chance to earn the rewards, miners have to solve a complex math puzzle that requires lots of costly processing power.

And after yesterday’s halving, the reward for verifying each new group of transactions dropped to 6.25 bitcoins.

This continues until, sometime in the first half of the next century, bitcoin reaches its hard cap on supply of 21 million coins. (Right now, the supply is just north of 18 million.)

This is a way of giving scarcity to bitcoin… and distinguishing it from the dollar, the euro, the yen, and other fiat currencies with infinite supply.

Bitcoin’s supply is tapering over time as demand is increasing.

And if you know your Econ 101, that’s about as close a “recipe” for rising prices as you can find.

It’s the opposite for the dollar and other fiat currencies…

One of the most shocking statistics I’ve read about this comes from Adam Tooze.

He’s a leading economic historian. And he’s the author of the definitive book on the 2008 crisis, Crashed. He’s also an expert in central bank operations.

As he pointed out, in the worst of the stock market drop this March, the Fed was creating $1 million a second to buy financial assets.

That’s about $90 billion a day… or more than the Fed was creating a month in the worst days of the 2008 crisis.

Contrast that with what’s happening with the supply of bitcoin.

Instead of ballooning, it’s shrinking.

That’s because, as I mentioned up top, instead of being subject to the whims of governments and central banks, bitcoin’s supply is governed by an already-agreed-on protocol.

That makes bitcoin a much more reliable store of value, which in turn makes it rise in value versus inferior stores of value, such as the dollar.

And I get that.

After all, a bitcoin is a string of 1s and 0s in a decentralized database on the internet.

It’s hard to imagine how something that isn’t physical (like, say, a bar of gold or a barrel of oil) can have value.

But most dollars are just 1s and 0s in an electronic balance in a bank account. The rest of them (about 3% of the supply) are printed on otherwise worthless pieces of cotton-fiber paper.

The defining difference is that bitcoin is in scarce supply… and the dollar isn’t.

That’s why bitcoin goes up over time against the dollar…

But don’t just take my word for it. Look at what happened the last two times (the dotted red lines) bitcoin’s supply halved. 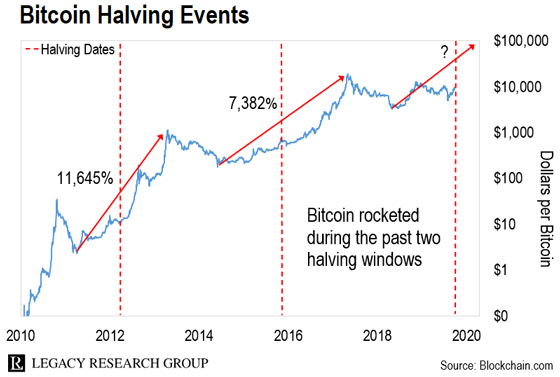 As you can see, bitcoin bottomed about 15 to 16 months before each of the first two halving dates. But it rallied for a year or more after them.

You can see from the chart that bitcoin tends to rally going into the halving.

It’s why Teeka flagged the halving for you in these pages last September.

But if you’re just joining us… there’s still time to buy.

You won’t be alone.

Jones made a name for himself on Wall Street as one of the only guys who saw the 1987 crash coming. His bet against stocks returned 126% for his fund and earned an estimated $100 million.

And he’s made hundreds of millions more since then.

As he told CNBC’s Squawk Box, he – like Teeka – looks at bitcoin as “something to keep a tiny portion of in your portfolio.”

And he thinks bitcoin might be the best performer of all of his current investments.

For more on how to buy your first bitcoin, read on here.