I (Chris) am writing to you from the Aviara Hotel in Carlsbad, California…

I’m here with more than 450 of your fellow readers.

We’re just about to kick off the second annual Legacy Investment Summit.

If it’s anything like last year’s inaugural event in Bermuda, it’s going to be a lot of fun. It’s also going to be packed full of investment insights and recommendations.

Last year, for instance, Teeka showed why 2019 would be the year of “Wall Street greed” for cryptos (more below)… Jason recommended his top five “outlier” stocks (his top pick is up 62% since then)… and we showed you the steps you could take to shore up your privacy in the coming surveillance state.

This year’s summit kicks off in a few hours…

It’s a chance for Legacy analysts and readers to get to know each other. Then tomorrow and Wednesday, we’ll get into the investment opportunities… and risks… we see ahead in 2019 and beyond.

So if you made the trip to join us, make sure to introduce yourself later on. I’m looking forward to meeting you in person.

If you’re not here with us in Carlsbad, don’t worry…

The next best thing is to pick up a livestream pass.

All you have to do is follow this link for more details. You’ll learn how to get access to all the big ideas, insights, and takeaways – live as they happen.

That way, you can catch the entire event from the comfort of your living room. And the best part is, with a virtual ticket, you can also watch a replay of the event after it’s done. So pick up a livestream pass here.

And look out for more from us this week here at the Cut on the takeaways from the summit. I’ll be updating you on that in these pages.

Today, we’re circling back to a familiar theme – cryptos…

As regular readers know, the buildout of the crypto economy is one of the most profitable investment themes on our radar here at Legacy.

And as colleague Teeka Tiwari has been telling folks… now is a great time to pick up some exposure to the crypto market.

That’s because there’s an important date next year that you should be aware of – May 20, 2020.

That’s when an event will take place that will change bitcoin’s value dramatically.

This event has happened twice before. Both times preceded new highs for bitcoin…

It’s called the “halving.” And as you’ll see today, it’s good news not only for bitcoin. It can also push up prices for the rest of the crypto market.

To grasp why the halving is so important, you have to first understand the basics of how new bitcoins enter the supply.

That happens through a process called “mining”…

So new bitcoins have to be costly to bring into the world… just like new gold.

This is what separates bitcoin from, say, the U.S. dollar. The Fed and the banks it regulates create new dollars with a few strokes on a computer keyboard.

Unlike creating fiat currencies, digging gold out of the ground takes effort…

It costs a top-tier gold mining company between $700 to $900 to extract each ounce.

It costs money to mine new bitcoins, too.

New bitcoins are released to bitcoin “miners” as rewards for verifying transactions on the network.

But there’s a catch…

Before they get to verify new transactions and earn new coins, miners have to perform processor-intensive computer calculations to solve complex math puzzles.

And all this processing power requires electricity… which costs money.

In short, bitcoin mining – like gold mining – is a business…

With a gold mine, you buy rights to a piece of land. Then you crack open the rock. And you haul the ore out.

As long as the price of gold is above your cost to dig the gold out of the ground, you have a profitable business.

With a bitcoin mining operation, you set up a bunch of specialized computer hardware near a cheap source of power.

Then you pay out big bucks on your monthly electricity bill to run your computer rig.

As long as the miners keep their costs below $125,000 per block… they’re in business.

But next May, the reward per block will be cut in half…

Hence the name the “halving.”

In just eight months from now, miners will be rewarded only 6.25 bitcoins per block. That will take new supply down from about 675,000 bitcoins per year to about 337,500.

So unless the price of bitcoin rises, one of two things happen: Miners go out of business. Or they continue to mine, but they refuse to sell at a loss the new bitcoins they earn.

This would have the effect of pulling even more new supply out of the market.

And for clues about what this means for bitcoin’s price, we can look back at the recent past.

Remember, this isn’t the first halving for bitcoin…

And the halving will continue roughly every four years until all 21 million bitcoins are released in the year 2140.

And each past halving preceded a surge in the bitcoin price. 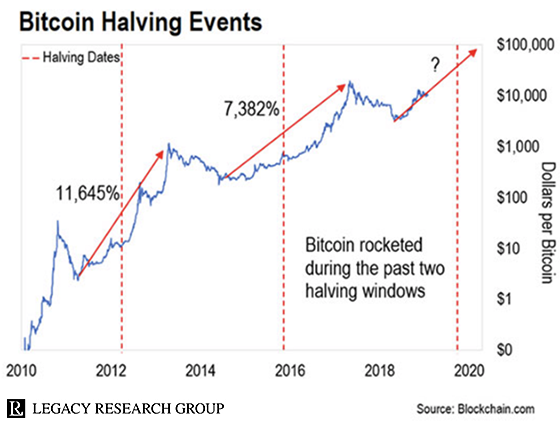 Bitcoin bottomed roughly 15 to 16 months prior to each of the first two halving dates. But it rallied for a year or more after them.

That’s why you don’t want to wait until the halving date to buy bitcoin.

Take another look at the chart above. You can see bitcoin doesn’t rally just up to the halving. It also rallies for a year or more after.

But you don’t want to wait until the halving date to buy bitcoin. You want to buy ahead of time.

We’re now eight months away from the next halving. So it’s not too late to buy bitcoin to profit. But the window is closing.

And this supply crunch is also coming as demand explodes…

As Teeka has been telling his readers, 2019 is the year deep-pocketed investors get on board with crypto.

And his market “script” is playing out. As Teeka put it on Friday…

Last month, Bakkt received regulatory approval to begin trading physically settled bitcoin futures. Bakkt is a subsidiary of the same company that owns the New York Stock Exchange. Its platform is set to go live this coming Monday. It’ll buy bitcoins on the open market and store them on behalf of customers. That’s never happened before.

Also, the CEO of crypto exchange Coinbase, Brian Armstrong, said institutional customers are now depositing between $200 million and $400 million in crypto per week to its new Coinbase Custody product. Since July 2018, Coinbase Custody has amassed more than $1 billion in controlled assets.

That’s why, last week, Teeka hosted his first live crypto training of 2019. More than 25,000 of your fellow readers tuned in.

And as Teeka explained, the halving isn’t good news just for the world’s most popular cryptocurrency, bitcoin. It’s also good news for a handful of tiny “altcoins.”

Altcoins are cryptos other than bitcoin. And Teeka believes a stake of just $500 in five of these altcoins could turn into $5 million 10 months from now.

P.S. Stay tuned here at the Cut for more from Carlsbad. I’ll be sharing my favorite investment opportunities and ideas from the summit with you… along with the key takeaways. So keep a lookout for those updates in your inbox.