Before we begin, a quick thank you…

If you were among them, thanks for taking the time to tune in.

Teeka revealed the five “altcoins” (cryptos other than bitcoin) he believes can turn $500 into $5 million in as little as 10 months.

Don’t worry if you missed out. As a Daily Cut reader, you can catch the replay here.

And as you’ll see in today’s dispatch… the reasons to own cryptocurrencies are growing every day.

That’s because the currencies issued by central banks are growing more unreliable by the day.

Take the spike in bank lending rates earlier this week…

As you probably heard if you were tuned into the financial news… the Fed lost control of interest rates.

Banks ran low on the dollar cash balances – or “reserves” – they need to settle transactions with each other. And the Fed was forced to step in with emergency liquidity.

You can see the chaos it caused in the chart below.

It shows something known as overnight repo rates. These are the rates at which banks lend reserves to each other overnight… and a key lending rate for the entire economy. 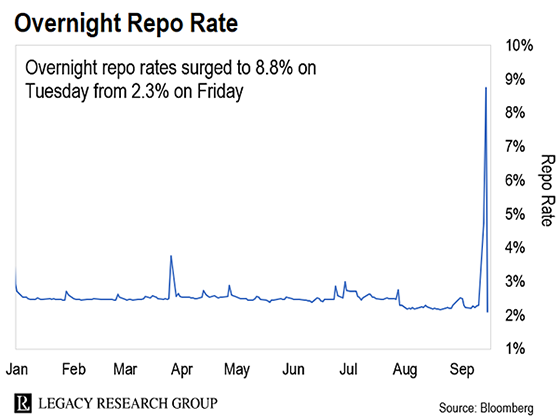 It’s something Tom Dyson has been warning about…

But what you may not know is that before he began writing newsletters, Tom worked for Citigroup in London. And he used to work on the “repo desk,” trading in exactly the kind of short-term funding markets that blew up this week.

It gave him an insider’s insight into how the “plumbing” of the financial system fits together.

And as he warned readers of our new e-letter, Postcards from the Fringe, the credit crunch we saw this week in the overnight repo market means the Fed will be forced to restart its “quantitative easing” (QE) program. Tom…

For the last three months, I’ve been warning about a shortage of dollars in the market for short-term (one- to three-day) loans. Banks use the funds they borrow to match their obligations with their assets on a minute-by-minute basis. Trillions of dollars change hands every day in these markets.

All you need to know, Tom told readers, is that there aren’t enough dollars in the system… And the situation keeps getting worse.

“Any moment now,” Tom says, “the Fed is going to open the liquidity spigots.” That’s when we’ll get more QE. “If it doesn’t, things are going to start blowing up.”

It’s not just the dollar that’s in trouble…

It’s a race to the bottom for government currencies.

What are these central banks devaluing against?

They’re devaluing against assets that are scarce. Here’s what I mean…

There’s only so much gold on Earth. And it’s expensive and messy to dig out of the ground. That’s why we’re bullish on gold here at The Daily Cut, as government currencies melt down.

Then there’s bitcoin. It’s a digital version of gold. The supply of bitcoin is limited to 21 million coins. And it takes real-world inputs – in the form of electricity – to “mine” each new bitcoin.

These attributes make gold and bitcoin much better stores of value than the currencies governments can print out of thin air.

Right now, new bitcoins are mined at a rate of about 675,000 bitcoins per year. But as Teeka showed in his live crypto training last night, that rate is set to halve next year.

Now, Teeka found five coins he says could help you turn $500 into $5 million… if you get in before the next halving happens. Find out more here.