This pendulum is one of the oldest gold market indicators…

It looks at the long sweep of history. And it tells you when you want to lighten up on stocks and buy gold.

It also shows you when it’s time to lighten up on gold and buy stocks.

The last time this indicator favored gold, the price of the yellow metal rose 500% over the next eight years.

And as you’ll see in today’s dispatch, the pendulum is once again showing that gold is a screaming buy.

Our goal is to help ordinary investors achieve extraordinary gains by thinking differently from the crowd.

As Teeka likes to remind his readers, if you don’t already have a fortune to invest, there’s only one way to build one. Invest in a megatrend early on… and stick with it.

To do that, you have to be a contrarian yourself… or follow someone who is.

Think about it… The reason getting in early on trends makes you so much money is prices are still dirt cheap at that stage. And the price of an asset gets dirt cheap only because most investors don’t see the asset’s potential.

It’s a rare talent. The urge to conform is powerful. So you don’t meet many true contrarians.

But someone I consider a master of this kind of investing is Tom Dyson.

Tom is a legend in our industry…

He started his career as a bond trader at Citigroup in London. He then moved on to the legendary trading floor of Salomon Brothers in London. But after discovering Legacy Research cofounder Bill Bonner’s e-letter, Tom was captivated…

He decided to quit his job to join Bill’s company as a newsletter writer.

And since he started to pen his own newsletters, Tom has made some hugely lucrative contrarian calls.

That wasn’t the first time Tom’s “rabbit’s foot” twitched. In the early 2000s, he drained his bank accounts to buy one of the most unpopular assets in the world at the time – gold.

Gold was so unloved at the time, the British government had started selling off its reserves.

That’s if you can even get your hands on it. As regular readers know, the supply of gold coins and bars for retail investors has all but dried up.

But between 1999 and 2002, Britain’s Treasury head at the time, Gordon Brown (he later became prime minister), decided to sell.

Over those three years, Brown ordered the Treasury to offload 401 tonnes of gold – out of its 715-tonne reserve – at an average price of $275 an ounce.

This coincided with the dot-com boom… when internet stocks were shooting seemingly ever higher.

The overwhelming consensus was that gold was junk and that stocks would continue to shoot higher.

But Tom was so convinced the crowd had it wrong, he even took money from six of his mother’s bridge friends to fund his gold bet.

Within eight years of Tom’s bet on gold, it had skyrocketed almost 500%.

And as I mentioned up top, gold stocks did wildly better with the HUI Index, almost tripling over the same period. 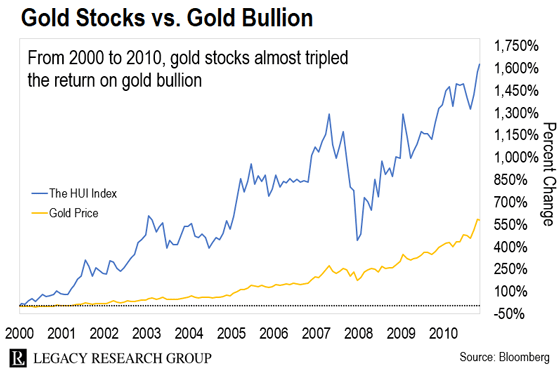 Tom believes history is about to repeat…

But the last decade favored stocks. You can see it in a chart of the “pendulum” indicator I mentioned.

When the line on the chart is rising, it means stocks are outperforming gold. When it’s falling, gold is the winner. 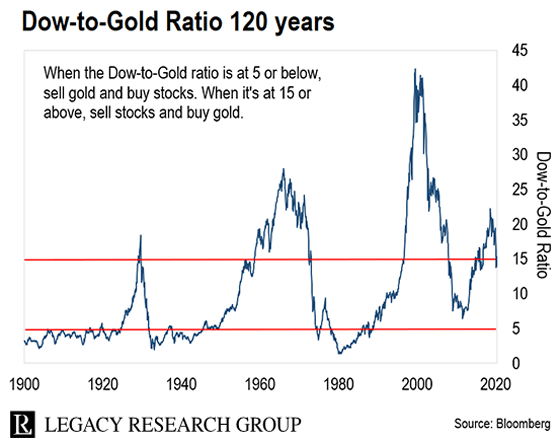 Here’s Tom with more on how to read it…

You buy stocks when they are cheap relative to gold. That’s when the Dow-to-Gold ratio is below 5. In other words, when it takes five ounces of gold or less to buy all 30 Dow stocks.

You sell stocks when it takes 15 ounces of gold or more to buy the entire Dow. Then you sit in gold until stocks become cheap again (in gold terms).

Over the last 120 years, whenever the economy “reset” – like we’re seeing today – the ratio went below 5. Gold soared, in other words, and stocks got cheaper in gold terms.

On the flip side, when this stock market is ripping – as it was in the late 1990s around the dot-com boom – the ratio has gotten as high as 41. It took 41 ounces of gold to buy the Dow. Stocks were expensive in gold terms.

And the thing about this barometer is that once it begins a trend, it tends to stay in that trend for many years.

It’s why Tom recently made a personal $1 million dollar bet on gold. The Dow-to-Gold ratio was sitting above 20. That’s a screaming contrarian indicator that gold is going to be a much better place to be than stocks over the coming years.

It’s not too late to buy gold…

So there’s plenty of time to ride this profit trend higher.

As I’ve shown you, the best place to start is with physical gold by way of something like the Sprott Physical Gold Trust (PHYS).

It’s an exchange-traded trust that gives you ownership of gold bars that are stored in a vault at the Royal Canadian Mint.

So if you don’t own any gold already, now is a great time to pick up shares in PHYS.

That’s why he’s created an entire trade to take advantage of this opportunity. And next week, he’ll be sharing all the details in a special briefing.

Bill will even be joining in from his ranch in Argentina. You can reserve your spot here.

And keep an eye out here at the Cut for more on the gold rally. As you’ll see, Tom isn’t the only one on the team who sees gold screaming higher…