It was a bold claim…

Hard assets are difficult to produce relative to their existing supplies.

They’re a favorite of the ultra-rich because they make excellent stores of wealth.

That’s why so many rich people love gold. It’s traditionally been their go-to hard asset.

But if Nick’s right, bitcoin – not gold – could prove to be the best long-term store of wealth.

You see, hard assets have one thing in common…

They can’t be easily replicated… printed… or typed into existence with keystrokes at a central bank.

That’s why gold has been a store of wealth for thousands of years.

It’s a chemical element with the symbol Au and atomic number 79 on the periodic table.

There are only about 200,000 tonnes of gold on Earth. That would all fit into a cube with sides 21 meters long (roughly the length of a 10-pin bowling alley).

And gold’s hard to get out of the ground. It varies from producer to producer, but it costs somewhere in the region of $1,000 per ounce.

But Nick’s latest research at The Casey Report shows that bitcoin is an even harder asset than gold.

Before you send me a nastygram for talking down gold, some important context…

We’re fans of gold AND bitcoin here at the Cut…

We recommend you own both as part of a sensible asset allocation plan.

Gold and bitcoin are two great ways to place part of your wealth outside the government-run money system.

As we’ve looked at before, the supply of government-issued currencies such as the dollar is infinite.

And just like you don’t run out of zeros in a spreadsheet… central banks aren’t going to run out of dollars, euros, or yen.

By contrast, gold and bitcoin are both scarce…

As I’ve been harping on about… there’s a fixed amount of gold on Earth. It forms in space through nuclear fusion. And unless we figure out alchemy, there’s not going to be more of it any time in the near future.

Bitcoins are digital. And that gives folks the impression they’re easy to come by.

But each bitcoin is “mined” using processor-intensive computer calculations. This takes real-world inputs in the form of electricity and expensive computer equipment.

The amount of power it takes to mine one bitcoin is equivalent to the electricity consumption of the average U.S. household over 18 days.

You see a lot of articles in the mainstream press expressing outrage over this. But it’s a feature, not a bug. The intention is to make sure bitcoin is honest money, like gold.

Thanks to this feature of bitcoin’s design, it’s impossible for someone to simply type new bitcoin into existence.

And Nick says how this mining process is set up makes bitcoin the world’s hardest asset.

You can see that using stock-to-flow analysis…

Don’t be put off by the jargon. It’s just a measure of how hard an asset is. Here’s Nick with more on that…

The “stock” is the quantity of the asset that’s available, like current stockpiles. It’s the supply already mined. It’s available right away. “Flow” is the new supply added each year from production and other sources.

The stock-to-flow (S/F) ratio is the number of years of new supply needed to equal the current supply.

The chart below is of the S/F ratio for bitcoin versus precious metals gold, silver, platinum, and palladium. 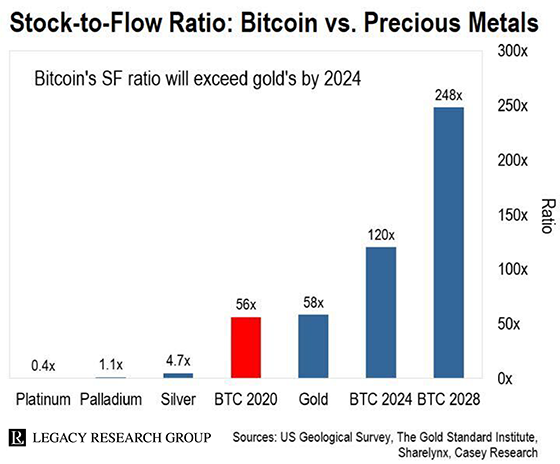 As we explored in detail here, bitcoin’s source code governs the issuance of new bitcoin. Every four years, the supply of new bitcoin is halved – an event called the halving.

But that will change dramatically with the next two halvings.

Four years from now, bitcoin’s ratio will be more than double gold’s.

And after the following halving in 2028, bitcoin will have an S/F ratio more than four times that of gold.

Commodities are scarce. But their supplies are still relatively elastic. They respond to price moves. As prices go up, so does supply.

With bitcoin, it’s different. Its new supply is fully automated and predictable. It runs like clockwork, governed by the cold, hard logic of computer code.

And it’s clear from this next chart that new supply has peaked. 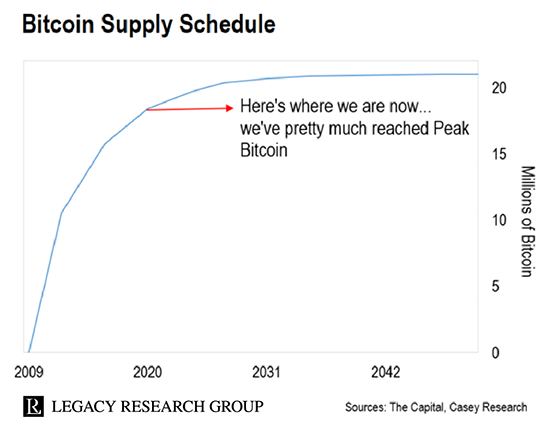 Nick again with more on why that matters…

By the end of this decade, more than 98% of all bitcoins will have already been created. The supply of bitcoin won’t grow much at all from here – and demand is set to explode. We’ve already reached what I call “Peak Bitcoin.”

And that’s hugely important in terms of where bitcoin’s price is headed.

But that’s where bitcoin is headed if its market value catches up to gold’s.

Right now, the sum value of all bitcoin in circulation is $174 billion. That’s compared to $9 trillion for the market value of all mined gold.

If more folks start to see bitcoin as the ultimate hard asset… and its market value rises to gold’s current $9 trillion value… the math works out to a bitcoin price of about $428,000.

This is all set to play out over the next decade.

I hope this has spurred you into action…

As we’ve been showing you, bitcoin is the perfect asymmetric bet. Because its potential upside greatly outweighs its downside.

Just make sure to never bet the farm on it. And like I said up top, buy it in the context of a sensible asset allocation plan.

For more on how to take the first step, read our free guide to buying bitcoin here.

P.S. Sharp-eyed readers will recall that I said in yesterday’s dispatch that one bitcoin could reach as much as $2 million. It has to do with a process Nick calls “hyperbitcoinization.” More on that in future updates…