We recommend you own both gold and bitcoin as part of a sensible asset allocation plan.

But last month, we asked a controversial question. Which is a better bet over the long run – gold or bitcoin? 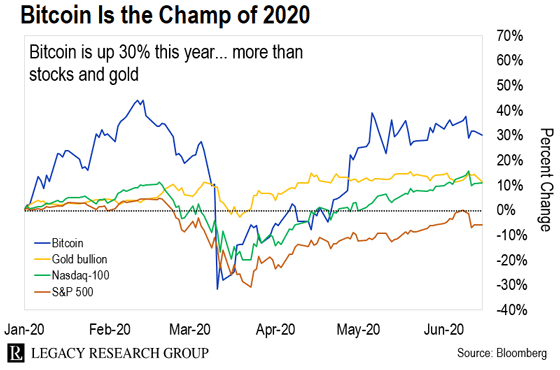 This year, the world’s first cryptocurrency is up 30%.

And as you’ll see today, bitcoin is going to do even better relative to the competition over the coming years and decades.

So, if you’ve ignored our repeated recommendation to get started in bitcoin with a $200 to $400 grubstake, please pay special attention.

I (Chris) will be shining the spotlight on bitcoin today and tomorrow. I sincerely hope that, by the end of it, you’ll be off the fence and ready to profit as bitcoin leaves stocks… and even gold… in the dust.

Each week, thousands of new readers like you sign up to one of the 17 paid advisories we publish here at Legacy Research.

You know you won’t find investment ideas that really move the needle on your wealth in the mainstream media. So you’re seeking an alternative source of ideas and insights.

My mission at The Daily Cut is to make sure you don’t miss any.

And the rise of bitcoin is top of our list.

Our investment case is simple. Bitcoin is set to grow in value as a government-proof, central-bank-proof, and inflation-proof alternative to the U.S. dollar and other national currencies.

It’s an idea Nick Giambruno has been writing about over at The Casey Report since the summer of 2018. That’s also when he added bitcoin to the model portfolio at $6,300 a coin.

Today, it trades at $9,360. That’s a 49% gain for readers who acted on Nick’s advice. But he believes the gains are just getting started… and that bitcoin is going higher…

Bitcoin is the world’s “hardest” asset…

A hard asset, on the other hand, is difficult to produce relative to its existing supply.

You can’t create more of it with a few keystrokes on a computer terminal – like you can with the U.S. dollar, for instance.

That’s why ultra-wealthy investors seek hard assets. Due to their limited supply, they protect you from wealth-destroying effects of inflation.

Typically, hard assets are commodities we dig out of the ground – gold, silver, oil, copper, iron ore, etc. But there’s a caveat. Nick…

For example, suppose the prices of both gold and copper double. It will incentivize producers to mine for more copper and gold. But gold is a “harder” asset than copper. So the resulting increase in gold supply will be less dilutive to the price than the increase in copper supply.

This is a primary reason humans have used it as money for over 5,000 years. It’s an excellent store of value because it is relatively hard to produce more of it.

Gold is forged in stars through nuclear fusion…

Like most heavy metals found on Earth, it forms in space.

Unless someone figures out alchemy… and turns base metals into gold… there’s not going to be more of it any time in the near future.

And there’s not as much of it above ground as you might think.

Estimates vary. But according to the World Gold Council, there are fewer than 200,000 tonnes of gold above ground.

That may sound like a lot. But if you melted it down into one cube, it would measure about 21 meters on each side. That’s about the same length as a standard 10-pin bowling lane.

Then there are roughly 54,000 tonnes of gold below ground…

Mining that gold increases the above-ground gold supply by 1.8%, on average, each year.

That compares with an average annual rate of increase of 3% for iron ore, 3.2% for copper, and 4.7% for silver. 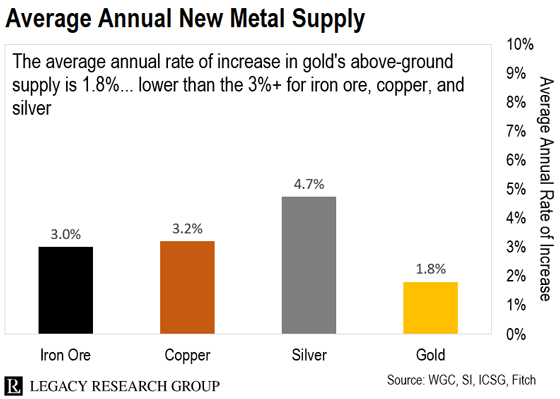 As you can see, there’s much less new gold coming on stream than new silver, copper, or iron ore. That’s what makes it so attractive as a hard asset.

But even gold isn’t as hard as bitcoin…

Bitcoin’s source code – not a central bank or government – governs the issuance of new bitcoins.

So even if the crypto rises in price, that can’t incentivize new production like it can with gold, silver, and other commodities.

New bitcoins enter circulation on a fixed schedule that tapers over time. New supply is cut in half every four years – an event known as the halving.

So far, 18.4 million bitcoins have been issued. This number will grow until there are 21 million bitcoins. Then it will stop for good… no matter where the bitcoin price is.

Here’s Nick with more on why that’s key…

Consider including bitcoin in the gold and copper example from before… where the rise in price incentivizes more production, which creates more supply, and eventually, downward pressure on prices.

But bitcoin’s supply is perfectly inflexible and is entirely resistant to this process.

No matter how high the bitcoin price goes, it cannot induce the production of more bitcoins. There is no other asset in existence like this. This is why bitcoin is the hardest asset the world has ever known.

As a free-market, nongovernment, hard asset, bitcoin is in the same league as gold.

Tomorrow, I’ll show you a specific method of analysis you can use to precisely gauge the “hardness” of bitcoin versus other assets.

I’ll also show you why this means one bitcoin will potentially be worth as much as $2 million.

Meantime, you can check out our free guide to buying bitcoin here.