In May 2011, in a Casey Daily Dispatch titled “Doug Casey on Civil War, Past and Potential,” he predicted conditions were ripe for a second Civil War.

To folks fed on a diet of mainstream news, this probably seemed an outrageous thing to say… and an unimaginable outcome for the country.

But after the protests and riots across America over the weekend… more than 60 million Americans under curfew… and President Trump threatening to put the U.S. military on the streets to quell civil unrest… Doug’s dire prediction appears to be coming true.

So today, I (Chris) want to shine the spotlight on the unrest Doug sees coming. Then I’ll continue my long campaign to get you to disaster-proof your portfolio.

If Doug’s even half right about what’s coming down the pike, you’ll be glad you did.

Each week, thousands of new readers sign up to one of the 17 investment advisories we publish at Legacy Research.

If you’ve just found this e-letter in your inbox for the first time, it means you’re one of them.

We created The Daily Cut as a premium e-letter for all paid Legacy readers in 2018.

Since then, we’ve been bringing you the latest big-picture ideas from Doug, Bill Bonner, Teeka Tiwari, Jeff Brown, Nick Giambruno, Dave Forest, Dan Denning, Jason Bodner, and the rest of the Legacy team.

We’ve covered everything from the rally in gold and silver… to how to make millions in crypto… to the suite of sci-fi technologies 5G wireless networks are making a reality.

We’ve also made you aware of the threats to your wealth… and your liberty… we see coming.

For instance, in February, I warned you in these pages of a Black Swan event that would cause “enormous volatility” in currency and stock markets.

I had just gotten off the phone with one of the world’s most legendary traders, Andy Krieger. He told me that investors were in for a “very dangerous time.”

It goes to show…

You have to get the big picture right…

At least if you want any chance of growing your wealth in the markets over time.

Here at Legacy, we publish research on scores of stocks. We also cover the crypto market and private (pre-IPO) deals.

But we always keep a close eye on the big picture.

Bill Bonner is Doug’s fellow cofounder of Legacy. He’s also my mentor. And I’ll always remember him explaining it to me with an analogy from history…

If you were an investor in the stock market in Tsarist Russia at the turn of the 20th century, it didn’t matter what stocks you picked. What mattered was that you saw the signs of revolution coming… and got out of Dodge before the Bolsheviks took over.

Folks who saw the writing on the wall survived with their wealth and their liberty intact. Folks who missed the big picture didn’t.

And if you’re relying on the mainstream news for that kind of insight today… you’re all out of luck. All you’re going to get is mainstream opinions.

I’m not saying what’s coming down the pike in the U.S. will be as bad as the Bolshevik Revolution.

But it’s not going to be a cakewalk, either. If Doug’s right, profound change is on the way… including the potential breakup of the United States of America.

The problem is red-blue politics…

Doug says the second Civil War will be between “red” and “blue” states. That is to say, between Republicans and Democrats.

It’s an idea he returned to last November in an interview at his home in Aspen, Colorado. Doug was asked about the political landscape heading into the 2020 election season. Here’s his reply…

Keeping in mind the difference between a civil war and a war of secession, I think it’s possible that the U.S. could have both – like we did in the Revolution. Why? Because people in the red counties and the blue counties really hate each other. They should, therefore, be politically separate. And that could be peaceable. But they’ll likely try to keep the union together, which means one group has to suppress the other group. They can’t have a civil conversation. Members of the same family can’t even talk politics or economics anymore. They’ve come to disrespect, even despise each other on a visceral level.

It’s much worse this time, even if so far it hasn’t been as violent. Recall that during the late 1960s and early 1970s the U.S. had several thousand bombings. But things eventually calmed down.

Back then, however, we just had three major TV networks and some newspapers. Today there are thousands of channels of social media around to aggravate and abet discontent. With the old mass media everybody heard more or less the same thing – the hoi polloi just heard what the mass media told them.

Today not nearly as many people watch or read mass media, and nobody really trusts it. Today it’s all about Facebook, social media, and the Internet. Much more unpredictable, and potentially explosive. They allow the public to communicate across the country and form groups… That was very hard to do in the 1850s. It makes a conflagration much more likely today.

Here at the Cut, we don’t have a crystal ball. And we get that, unlike hindsight, foresight is never 20/20.

Over the weekend, the divisions in America were on naked display.

The killing of George Floyd, a 46-year-old black man, by a police officer set off a wave of violence that’s left at least one cop dead in Oakland, California.

According to the Associated Press, a police officer was shot near the Las Vegas Strip.

Meanwhile, four cops were hit by gunfire in St. Louis, Missouri, as they stood next to a police line.

And in New York, video captured a car mowing down a cop, who suffered serious injuries.

This is still a long way from the bombardment of Fort Sumter, which kicked off the war between the North and the South in 1861.

But Doug was spot-on when he warned of a coming “conflagration” – which literally means “a great fire.” (Flagrare means “to blaze” in Latin.)

Over the weekend, rioters set cities ablaze around the country. One of the abiding images of the mayhem was the fires burning outside the White House.

Here’s the thing – social disorder is like a virus…

It doesn’t last forever… but it doesn’t disappear overnight, either.

This was true of Europe in the 1920s and 1930s… when the twin evils of fascism and communism were on the rise.

And it was true of America in the late 1960s… when civil rights protests and protests against the war in Vietnam set the country ablaze.

That’s yet another reason (to add to a long list) I’m so keen you protect your wealth by buying gold.

We don’t call gold “disaster insurance” for nothing…

Longtime readers know all about gold’s role in your portfolio.

But if you’re new to the conversation, gold’s a way to protect your wealth during times of uncertainty in the world – like right now.

That’s because it has a track record stretching back thousands of years as a store of wealth.

Gold also doesn’t rely on someone’s promise to pay for its value, like a stock or a bond. That means it doesn’t matter who goes bust in a crisis. Gold still holds its value.

It’s all in the next chart. It shows the price of an ounce of gold going back to when gold started to trade freely versus the dollar in 1971. 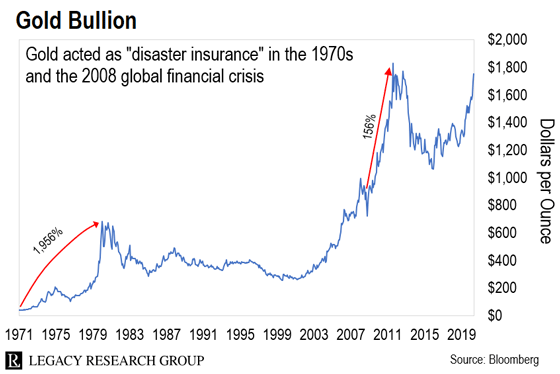 So… if you don’t own some gold already, what are you waiting for?

For more on how to do that, catch up on Friday’s mailbag edition of The Daily Cut.

We discussed in detail two innovative ways to own physical gold without having to store it on your property or in a safe deposit box at a bank. Read on here…