As regular readers know, we’re fans of both here at the Cut.

We see gold AND bitcoin as great ways to escape the government- and central-bank-run financial system.

Both are outside of the control of a central bank. Both have finite supplies. Both have enthusiastic backers here at Legacy Research.

But which one is the better bet?

That’s the nagging question on readers’ minds, judging by the latest batch of feedback in colleague Tom Dyson’s mailbag.

So today, we’ll zoom in on the questions Tom’s readers have sent in about bitcoin versus gold.

And we’ll try to get to the bottom of the question: Which is the better bet for folks who want to not only preserve, but also grow wealth?

That’s how Tom describes his investment in gold two years ago.

If you’re just joining us, Tom is from British banking royalty. His grandfather was the chairman of Barclays – the world’s sixth-largest bank – during World War II. His dad worked at Lehman Brothers. And Tom started his career at Citigroup before moving to the legendary bond trading floor at Salomon Brothers in London.

When Tom sees a “fat pitch” coming, he swings for the fences…

First, he sunk nearly all of his savings – about $1 million – into gold and gold stocks.

Then he told his brothers and his parents to sell their stock market funds and buy gold instead.

Then he took his message to a wider audience.

In 2019, he started writing about his big idea in a new e-letter, Postcards From the Fringe.

It’s called Tom’s Portfolio. It’s focused on helping folks take advantage of the ripping bull market in gold using the strategy Tom uses for his personal portfolio. (Tom explained it all in more detail during his emergency briefing on gold last week.)

Since Tom sold his stocks and converted his dollar savings into gold, it’s worked out pretty well. 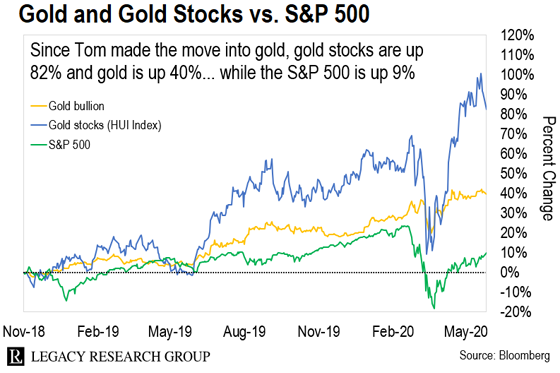 Gold bullion is up 40%. Gold stocks – which give you extra oomph, or leverage, over the gold price – are up 82%, measured by the Arca Gold BUGS Index (HUI).

That compares with a 9% gain for our regular bellwether for the U.S. stock market, the S&P 500.

And according to Tom, this is just the beginning for gold. As I mentioned, he sees it shooting past $10,000 an ounce.

You see, part of gold’s value comes from a quality that government-issued currency doesn’t have…

Gold has a finite supply…

Longtime readers will be sick of me banging on about this. But gold, like all heavy metals found on Earth, is forged in stars through nuclear fusion.

There are an estimated 300,000 tonnes of gold above and below ground on Earth.

And unless someone figures out alchemy and turns base metals into gold… there’s not going to be more of it any time in the near future.

That’s why we call gold a “precious” metal: It’s rare, and they ain’t makin’ more of it.

Gold’s scarcity value is relatively easy to grasp. Folks have a harder time grasping that bitcoin is also precious in this way.

Bitcoin is the digital version of gold…

First, its supply is finite like the supply of gold.

There can never be more than 21 million bitcoins. Currently, there are about 18 million in circulation. This leaves fewer than 3 million more to enter circulation before new issuance stops for good.

New bitcoins enter circulation on a fixed schedule that tapers over time. The issuance of new bitcoins is cut in half every four years – an event known as the halving.

This process is governed not by a central bank or government, but by bitcoin’s source code.

Second, unlike dollars or euros or yen, clerks at a central bank can’t digitally print new bitcoin using nothing more than keystrokes on a computer terminal.

Getting new bitcoin into circulation requires real-world inputs. Just like gold must be mined out of the ground, bitcoins must be “mined” computationally, by solving a complex math puzzle.

Computer rigs need to be powerful to solve this puzzle and mine bitcoin. These rigs cost money. As does the power to run them.

Right now, the amount of power it takes to mine one bitcoin is equivalent to the electricity consumption of the average U.S. household over 18 days.

In short, gold and bitcoin allow you to step outside the “matrix”…

Neither gold nor bitcoin is controlled by a central bank. Neither is issued in massive quantities to “stimulate” the economy. And neither “leaks” value due to inflation.

Our resident crypto expert, Teeka Tiwari, is a fan of both…

Gold and bitcoin belong in every well-protected portfolio. Gold is a great asset, especially in its physical form. But it’s not easy to break a piece of gold off and go buy something. It’s also not very portable – $100,000 worth of gold will rip your arm out of its socket. By contrast, you can carry $100,000 worth of bitcoin on a thumb drive.

The asset allocation plan Teeka follows at our Palm Beach Letter advisory includes allocations to both gold and bitcoin.

Tom, however, is focusing exclusively on the opportunity in gold…

And his readers want to know why…

And as you can see from the mailbag over at Postcards From the Fringe, it hasn’t escaped his readers’ attention…

Reader question: You made good money from bitcoin and obviously had confidence in it, but now you say it has no value. Why?!

Tom’s response: When I discovered bitcoin, it was unique and cheap. Today, it is neither. There are hundreds of other cryptos competing for the world’s savings. New cryptos come on the scene every day. I know they all purport to be different, but they are all just bits of information, and bits have an infinite supply and no limit to their inflation.

Meanwhile, the U.S. government is broke, and the Federal Reserve is hyperinflating its balance sheet. Gold is unique, and it is scarce. I’m convinced it’s about to go up hundreds of percent. I’m simply not willing to sell gold and gamble on bitcoin with it.

Reader comment: You commented that bitcoin went through a “tulip mania” moment in 2017, but actually, that was its third such moment in less than 12 years. The first time, it went from six cents to $24, for a 400-fold increase, before dropping back to an interim low of about $2.20.

Three data points are not enough to project what it might rise to this time, but it does seem to be on the march again. It is worth noting that the environment for each of these manias has been different, and I don’t expect history to repeat… but I have a small position, just in case it rhymes.

When I heard people discussing bitcoin in the line at Starbucks in December 2017, I knew it was forming a top that it wouldn’t surpass for years. If bitcoin makes a new record high soon, I’ll eat my words. But so far, it’s down more than 50%, and my thought has been exactly right…

Reader comment: As you are such a gold bug, you said, “Bitcoin has major flaws – the consumption of electricity and the speed of transaction confirmation, for example.” I own both. Gold costs money to store or protect if you own it in any appreciable quantity, which you avow to do. I think you could equate that with a broad brush with the electricity required to “maintain” bitcoin.

Regarding speed of transaction, I’d challenge you to buy anything transacted with gold and do it faster than you could with bitcoin. I’m guessing any place that wouldn’t do bitcoin also wouldn’t do gold. Both have value only because people say they do (sure, gold has some actual utility in electronics, but that doesn’t drive its value).

For more on why Tom favors gold over bitcoin, make sure to check out the replay of the briefing he held on gold last week.

But keep in mind that Tom is unusual in his singular focus on gold.

Our general advice is to always follow a sensible asset allocation plan that includes gold AND bitcoin.

You can find out more about that in Teeka’s classic essay on asset allocation here.