Often, the best advice is the simplest…

At 22 days, it was the fastest fall of that magnitude in history. 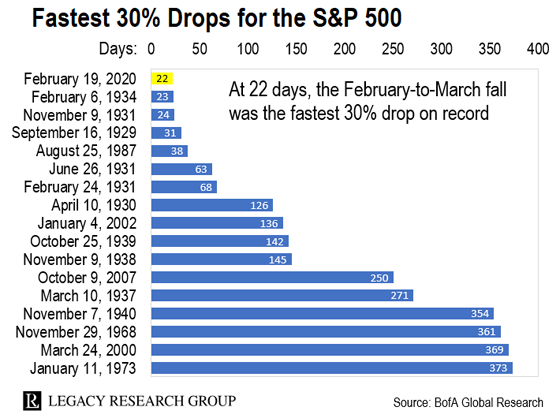 March 11 was also the day the World Health Organization (WHO) declared the coronavirus a pandemic and the death toll surpassed 20,000.

But colleague Teeka Tiwari urged a different, simpler path: Do nothing, and sit still.

Today, I (Chris) will show you why this was exactly the right thing to do.

And I’ll show you why, even if we do get another sell-off, it’s still the best strategy for folks looking to build wealth in the markets.

Teeka is best known as America’s No. 1 cryptocurrency expert…

He’s given paid-up subscribers of our Palm Beach Confidential advisory the chance to make gains of 2,439%… 2,544%… even 9,558% on his crypto recommendations.

But Teeka is also a stock guy.

He started his career on Wall Street in the go-go 1990s… and he went on to run his own hedge fund.

This gave him a ringside seat to some of the biggest, most dramatic stock market moves in history.

And one of the most important lessons it taught him is that the stock market is “self-healing.”

If you’re of a certain age, you’ll remember it.

In the fall of 2008… after Lehman Brothers went to the wall… it seemed as though the global financial system would blow up. The urge to panic sell was strong.

But that was the wrong thing to do. As Teeka explained it to readers of our Palm Beach Daily e-letter on March 12…

By March 2009, your $5 million account would’ve dropped nearly 58% to about $2.2 million. That’s a devastating loss – if you sold… if you tried to trade around it… or if you tried to get cute.

Still, the right “action” to take back then was to do nothing.

As of this year’s peak in the S&P 500, your initial investment of $5 million in 2007 would have been worth $14.1 million. Assuming you reinvest your dividends, that’s an 8.7% compounded annual return.

That’s why, when it comes to long-term investments, Teeka says activity is your enemy, and time and patience are your best friends.

On March 12, Teeka literally begged his readers not to sell…

Again, this was the day after the WHO declared the coronavirus a pandemic and the world passed the grim milestone of 20,000 deaths.

To say investor sentiment was in the ditch is an understatement. But Teeka stood firm. As he wrote…

If you’re a long-term investor, you can see that time repairs all stock market wounds.

So I implore you to leave your long-term investments alone. If you try to get “smart” with your long-term money, you’ll fritter away your capital. And you’ll likely cause yourself an extra five to seven years of work, just to recoup your losses.

If you followed Teeka’s advice, you’ll be hugely relieved.

You can see that in this next chart of our bellwether for the U.S. stock market, the S&P 500, going back to the start of the year. 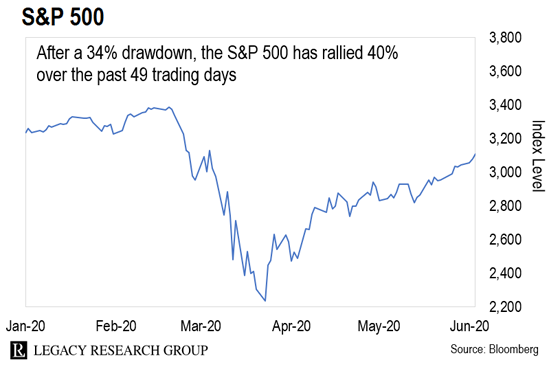 That leaves it just 9% below its pre-coronavirus-crisis high.

This market recovery is like the blink of an eye compared to the one following the 2008 fall… when the S&P 500 took 1,107 days – over three years – to reach its pre-crash highs.

This doesn’t mean stocks are out of the woods yet…

We’re still a long way from vanquishing the coronavirus.

As our tech expert, Jeff Brown, predicts, we could be dealing with the virus into 2021.

That means the economy won’t yet be able to get back into high gear.

And if the weekend wave of protests and riots is anything to go by, we could be in for a long, hot summer of social unrest, too.

Hardly the kind of backdrop you want if your goal is to see sales and earnings grow.

But even if we get another drop… our advice remains the same.

Sit still. Do nothing.

As long as you follow a sensible asset allocation plan (like the one Teeka lays out here), and never bet the farm on stocks, your best strategy is to ride out the panic selling and rely on the market’s ability to self-heal.