The Nasdaq gets nuked… Wall Street’s “fear gauge” is spiking… How to make your portfolio bear market proof… In the mailbag: “Does anyone have a shred of conscience left in them?”…

Is this the October jinx we told you about?

As we told you on Monday, October has been a cruel month for stocks.

And we warned that if the “generals” – the sectors that had been leading the bull market higher – continued to lead the market lower, a long-awaited correction would be close at hand.

And that masks an even bigger pain for Big Tech. Twitter (TWTR) and Netflix (NFLX) both closed down by 8% yesterday.

The bloodbath continued in Asia overnight…

Stocks in Shanghai – already in a bear market – closed down 5.2% for the day.

And China’s Big Tech names are also getting hit harder than the overall market.

And as we type, just an hour before today’s closing bell in New York, the S&P 500 is down another nearly 2%.

Wall Street measures the mood among investors by way of the CBOE Volatility Index (VIX).

It rises as investors start to fear more dramatic price swings for the S&P 500 over the next 30 days. And it falls when investors see calmer waters ahead over that same timeframe. 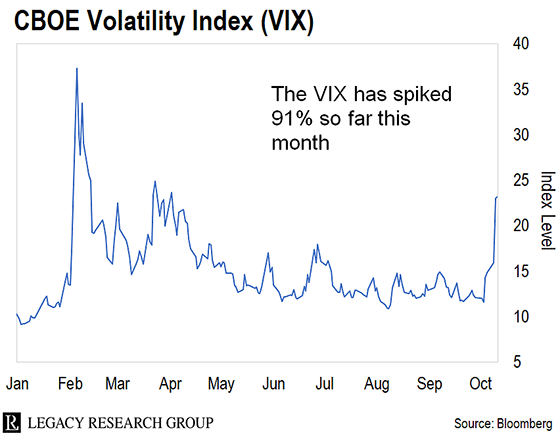 As you can see, the VIX has spiked 91% so far this month.

This is NOT a reason to panic…

Stock markets go down as well as up. It’s just the way the world works.

But if you keep yanking your money out of stocks every time they go down instead of up… you’ll never make any money. And you’ll likely lose a bunch.

A better approach is to take the necessary steps NOW to make sure your portfolio can withstand a bear market. Then you don’t have to worry about it.

It’s a lesson Teeka Tiwari – who heads up our Palm Beach Letter and Palm Beach Confidential advisories – learned the hard way. As he tells it…

The worst market crash of my life wasn’t the 2008 meltdown. It wasn’t the collapse of the dot-coms. The worst crash I ever lived through was the 1989-1990 technology bear market.

I was a newly minted 19-year-old money manager. There I was building a business in the absolute worst market since the 1987 stock market crash. Being young and attracted to tech, my portfolios were stuffed with names like Apple, Intel, and Oracle.

As he admits, his 20-something-year-old self didn’t handle the losses well. Teeka again…

I ended up selling at the absolute worst time. Pretty much near the lows. I compounded my error by not getting back into these names when it was clear the bear market was over.

That was a rough experience. And as we told you about here, it wasn’t the only trial by fire he went through as a young investor.

But as Teeka says, “Regret is a great teacher”…

Those experiences have taught him never to have too much of his wealth exposed to gyrations in the stock market.

Wall Street types call this “diversification.” But it’s just a fancy term for not putting all your eggs in one basket.

Diversification should be the bedrock of your portfolio.

The more diversified you are, the less power any single market event has to wipe you out.

Think about it this way…

Imagine you’re an investor who hasn’t diversified his portfolio away from stocks.

A 50% hit to your wealth is too distressing for most folks to go through. Especially if it’s their retirement savings that are at risk.

But if you’ve, say, only got one-third of your wealth in stocks, the same bear market will translate to roughly a 16% hit to your wealth.

That’s not pleasant. But it’s a lot easier to stomach. And it means you’re much more likely to stay invested and catch the next leg up when it comes.

Diversification doesn’t have to be complicated…

There are scores of books from investment pros about how to best diversify your portfolio.

By all means, figure out for yourself what works best for you.

An even simpler breakdown is the one Legacy Research cofounder Bill Bonner uses for his personal wealth. He splits his portfolio into three “buckets” – stocks… gold… and cash.

Making sure you’re not overexposed to any one investment bucket is going to make it a lot easier to endure the next bear market in stocks when it comes along.

Earlier this year, we put together a special report on how to protect your wealth from the next crash.

It lays out the top strategies Teeka, Bill, Doug Casey, Jeff Brown, Nick Giambruno, E.B. Tucker, and many of our other experts around Legacy use to protect their wealth in market downturns, recessions… even depressions and market crashes.

You’ll learn about why owning some gold and gold coins is always a good idea… how to take advantage of crisis opportunities… even the top 10 items for a “bug out” bag.

In the mailbag: “Dark Tech”… freedom… and escaping America…

Forget it, Facebook cut me out of the system without giving me a chance for rebuttal! Goodbye!

I have to admit, I am usually a lurker who doesn’t exactly contribute much, but hearing the recently (and increasingly) relentless measures taken by Big Tech to cream as much of your data as they can to the hilt, I can’t help but say kudos to Dan and all you freedom loving and still awake peeps from The Daily Cut for sounding the alarm!

I would certainly venture to say this is possibly the last stand that anyone who still has any shred of conscience left in them can and ought to take – I will be doing so, that’s for sure. Do keep us faithful readers in your community posted, I’m sure you have much more support than you realize!

Bill Bonner says, “But no technology has ever been invented that was not eventually used by the dark side.” Bill likes to sound very wise, but he will NEVER identify who is part of the “dark side.” And that’s why Libertarianism has never ever made a material impact on society.

There are three countries in Central America that are relatively free, especially compared to here. Colombia is the least fascist country in South America. And the country is large, varied, and above all, can be very fun. It is also a good place for Latin American medical tourism for equal care of about any treatment or surgery. Expect the whole process to cost 20% of what it costs in the States, or less, and definitely less for medicine, way less.

Between doctor visits or before or after surgery or recovery from it, enjoy beautiful, cosmopolitan Colombia. Costa Rica and Panama also have their freedom, especially Panama which uses the dollar. Latin America is a joy to behold, generally. Plan an escape from what used to be the US of A.

Do you have an escape plan? Write us at [email protected].

P.S. I (Chris) have flown into Legacy Research HQ in Delray Beach, Florida. We’re putting the finishing touches on the upcoming Legacy Investment Summit next Thursday and Friday in Bermuda.

We’re going to be discussing our top investing ideas. Plus, we’re going to be taking a deep dive into our big theme here at The Daily Cut – the threat to liberty from Big Tech.

If you’re coming to Bermuda, I look forward to seeing you there. If you can’t make it, don’t worry. You can pick up a livestream of the entire event here.