October has a history of crashes… The stock market’s “generals” are in retreat… One of the best investment opportunities of the new millennium… From the mailbag: “The sooner Facebook dies, the better”…

Today, why a left-for-dead sector is about to enter a new bull market…

It’s down 61% from its peak in June 2008. And the general public has just about given up on it as a result.

But as you’ll learn in today’s essay, this sector is now showing signs of life.

And the Legacy Research experts that have been tracking this sector the closest reckon it’s one of the biggest investment opportunities of the millennium.

Before we get to that… an update on all the red ink in stocks over the past week.

October hasn’t been kind to stocks…

This may not sound like much. But it masks even deeper losses for recent high-flier tech stocks and small-cap stocks. 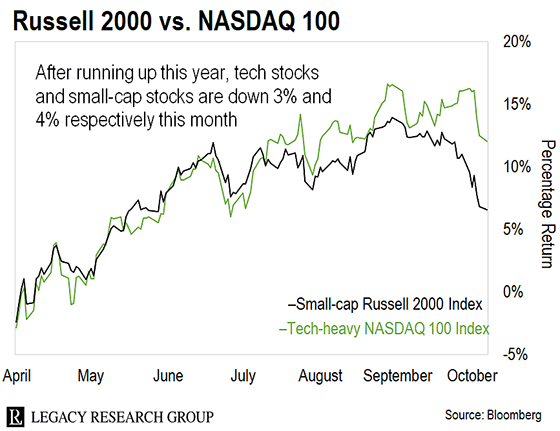 Is the “October effect” to blame?

The Panic of 1907 is not widely remembered these days. But it took the New York Stock Exchange down 50%. It unfolded over three weeks in October.

Then, right before the 1929 crash, the market convulsed in a series of three gut-wrenching, one-day plunges known as Black Thursday, Black Monday, and Black Tuesday. All three hit in October.

The second Black Monday crash – which hit on October 19, 1987 – took the Dow down 23% in a single day. To this day it remains the worst single-day percentage drop for the index in history.

And the Dow dropped 14% in October 2008, marking the start of the Great Recession.

So it’s no wonder there’s a widespread superstition that October is bad news for stocks.

But we’re not too worried about stocks being jinxed…

When you crunch the numbers, it turns out September is the worst month, on average, for stocks.

Over the long arc of history, investors have tended to make – not lose – money in October.

What IS worrying is that the sectors that have been leading the overall market higher – tech stocks and small-cap stocks – are the same ones now leading it lower.

That’s often a sign the market is topping out, according to one of the pioneers of “quantitative” analysis of the stock market, William O’Neal.

Another way to determine the direction of the general market is to focus on how the leading stocks are performing. If the stocks that have been leading the bull market start to break down, that is a major sign the market has topped.

Those stock market leaders are often referred to as the “generals”…

Like generals lead their troops, these stocks lead the rest of the stock market – in both directions.

And, as we showed you above, today’s generals – tech stocks and small-cap stocks – are in retreat so far in October.

This is something we’ll be keeping a close eye on in future dispatches. If today’s generals continue to retreat… the bear market in stocks that Legacy Research co-founder Bill Bonner has been warning about could be close at hand.

One left-for-dead sector of the market is making a comeback – commodities.

Let’s look at some examples…

Last week, mining company First Vanadium (FVAN.V) – an open recommendation at our International Speculator advisory, headed up by commodities expert Dave Forest – was the top performer for all the recommendations here at Legacy.

The company mines vanadium, an alloy used to make steel for jet engines and high-speed aircraft. Vanadium is also used as an alternative to lithium in the rechargeable batteries that are powering the electric vehicle revolution we’ve been telling you about.

First Vanadium surged 31% last week. That brings the gains for this company in the International Speculator model portfolio to 390%. (Not bad for a stock that’s only been in the portfolio since March.)

And that’s just the top of the iceberg…

So far this year, West Texas Intermediate (WTI) – the benchmark for U.S. crude oil prices – is up 23%. That’s almost three times the gains for the Dow.

As we’ve been telling you, gold is showing signs of life, too.

After bottoming in September, the VanEck Vectors Gold Miners ETF (GDX) is up 6%.

In fact, the commodities market is up across the board.

The Invesco DB Commodity Index Tracking Fund ETF (DBC) tracks 44 of the most commonly traded commodities on the planet. It’s up by nearly 10% for the year.

That’s more than the Dow, which is up just over 8% for the year.

And Doug called it…

Most commodities are not only selling at about the cost of production, but also at a clear cyclical low. Commodities are very cheap. In both absolute and relative terms.

Plus, the possibility of various financial accidents and force majeure loom over the markets. Political upsets and wars typically make commodities soar. Weather conditions or disease can create shortages.

These are among the macro reasons I think commodities will head higher over the next five years.

And Dave has phrased it even more strongly than that. As he told his readers, he believes commodities are setting up to be one of the best opportunities to profit that we’ve seen in the current millennium.

If you’re a paid-up International Speculator subscriber, make sure to check out his detailed investment case for commodities here.

If not, don’t worry. You can get broad exposure to the coming commodities bull run through the Invesco DB Commodity Index Tracking Fund ETF (DBC) we mentioned above.

Finally, in the mailbag: “The sooner Facebook dies, the better”…

Last week, we told you about blockchain-based social media platform Steemit. It’s an alternative to the Big Tech platforms that harvest and sell your data. And it’s still the hottest topic with your fellow readers…

I hate Facebook. I deleted it years ago and don’t use it. Thank goodness, with all the bad news lately. I have a Steemit account. I have had it for almost a year or more. I also hold STEEM tokens. Steem = Facebook Killer. The sooner Facebook dies, the better.

I have NEVER had a Facebook, Twitter or ANY kind of “social media” account! I think these are all just substitutes for real, live friendships. Listen everybody, get out of your hole and go meet people. We are becoming a society of isolated, pessimistic, and fearful weirdos. Get back to basics and go make a new friend. In person.

Dear Sirs, I’d switch to Steemit, in a heartbeat! I can’t stand the fact that our personal data, is being constantly “mined,” on (fakebook) Facebook. Later, Facebook!

I never did get into Facebook, not because I had any idea that my data for whatever it is/was worth would be used or even hacked into, but simply because like many of my friends, we are into the market issues and swamped with info on our email accounts. It looks like I stumbled into one of my better decisions! I had not paid any attention to Steemit but will take a casual look. Thanks for all the info you give us.

I haven’t updated my account on FB for over eight years, since before my husband died. But, I REALLY don’t like their ideas. I only go there to see friends’ stuff, nor do I comment. I gave security briefings at a former job. Please let me know more about Steemit.

So far, I’ve avoided using Facebook, Twitter, Instagram, and other social media, but I like to stay in touch with my children, grandchildren, and friends, if it can be done decently. Please keep me informed if new solutions are deployed.

A diversion from the main topic but related: Doug Casey and others see technology as our savior. I am not convinced of that either. Technology is neither good nor bad – it is simply a set of tools. Like all tools it can be used for benefit or harm. Given motivations that are indifferent to moral considerations, technology can go amok and do a lot of harm.

Do you use Steemit? Are you ready to give Facebook the shove? Write us at [email protected].