Are machines better investors than humans?

That’s the question front and center this week here at Legacy Research.

It’s about a machine-driven strategy he says can earn you an extra $12,000 a month with just 12 seconds of work per trade.

To be clear… The system Teeka is talking about doesn’t involve any human intervention.

Instead, it uses algorithms to decide what to buy and when. Running on super-fast computers, they crunch hundreds of years of market data to predict future market moves.

That may sound nuts. It’s certainly not the kind of investing your father… or your grandfather was used to.

But as you’ll see in today’s dispatch, it’s this kind of strategy that allowed the most successful investor in history to amass his fortune…

These guys are all multibillionaires. And they all have stunning track records as investors.

Take Buffett, for example. Folks widely consider him the world’s greatest investor. And over the past 40 years, he racked up average annual gains of close to 16% at his investment firm, Berkshire Hathaway.

But Jim Simons – a guy most folks have never heard of – leaves these household names in the dust.

Over the past 40 years, his flagship investment fund produced average annual returns of 66%. 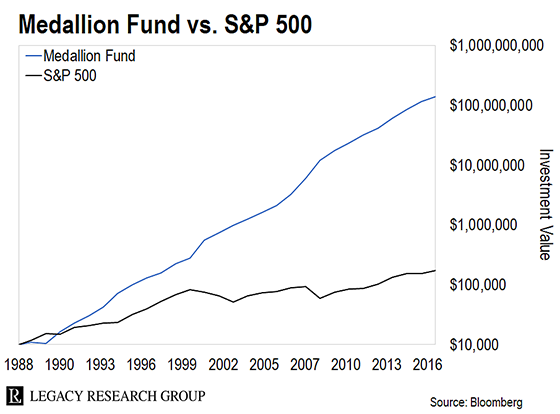 And get this… Over that time, the Medallion Fund has been responsible for hauling $100 billion out of the market.

In a word, algorithms.

Algorithms are series of steps for a computer to follow. Funds that use algorithms to trade markets are called “quant” funds.

Simons’ algorithms process vast amounts of historical market data. And they have one mission: hunt down predictive patterns that Simons and his team can exploit for profits.

And they’re real good at it.

Simons is one of the smartest math brains alive today. Even if he hadn’t beaten the pants off every other investor by applying math to markets, he’s still a fascinating guy.

Three years later, he became a codebreaker for the National Security Agency (NSA).

This was at the height of the Cold War. An elite research organization that hired mathematicians from top universities, the Institute for Defense Analyses, headhunted him. It helped the NSA detect and break Soviet ciphers.

Simons bested the Soviet cryptographers by creating his own codebreaking algorithms.

The NSA hadn’t been able to reliably crack Soviet codes in more than a decade. But Simons’ ultra-fast code-breaking algorithm gave it the breakthrough it needed.

But Simons hankered after using his math brain to make money…

That’s going by a new book that’s out about Simons. It’s called The Man Who Solved the Market. And it’s by veteran Wall Street Journal markets reporter Gregory Zuckerman.

He went to a broker… looked up a couple of stocks… and bought them. They didn’t budge.

This frustrated Simons. So he asked the broker if there was anything more racy he could try. And the broker told him, “You should look into soybeans.”

Simons didn’t know the first thing about commodities trading. But he was a quick study. As Zuckerman tells it…

When the broker said Merrill Lynch’s analysts expected prices to go to three dollars or even higher, Simons’ eyes widened. He bought two futures contracts, watched soybeans soar, and scored several thousand dollars of profits in a matter of days.

Simons later reinvested the profits… soybeans tumbled… and he barely broke even on the full trade.

But it didn’t matter. He was hooked…

And he became obsessed with the idea of using this “volatility” to make money over short periods.

He started showing up at Merrill Lynch’s offices by 7:30 a.m., when trading opened in the commodity pits in Chicago. And he’d stand there for hours watching the ticker tape on a big board… and making trades.

But investing remained a side interest for Simons until 1978. That’s when, at age 40, he started Wall Street’s first “quant” hedge fund. He called it Renaissance Technologies. It’s the parent company of the Medallion Fund highlighted above.

Simons is famously tight-lipped about how his algorithms spit out such high profits. The closest he’s come to describing how they work is the following:

We search through historical data looking for anomalous patterns that we would not expect to occur at random.

But there’s good reason for Simons to keep schtum…

He’s the first person I’m aware of who’s invented a machine that predicts the future.

It doesn’t do it with 100% accuracy. But it doesn’t need to. As his long-term returns show, it can do it with enough accuracy to be wildly profitable.

But there’s a catch…

These days, Simons’ Medallion Fund is open only to Renaissance Technologies employees.

Simons even kicked out friends and close contacts from the fund. Here’s Teeka with more…

Finding a way into the world of quant funds has been a tough nut to crack.

You see, unless you’re already outlandishly rich or a deeply- connected Wall Street insider, there’s no credible option for the everyday investor.

Sure, there are a ton of small funds claiming they can do what Jim Simons does… But under closer scrutiny, those claims shrivel up like a day-old hot dog under a heat lamp.

It’s why, two years ago, Teeka presented his team with an unusual challenge. He asked them to help him find a way to replicate the most profitable quant trading strategies.

They found a true quant who has been in the investing space for close to 40 years. He uses a system created by a Lockheed Martin aerospace engineer.

And together with Teeka, they’ve created a way to profit from this powerful Wall Street money-making strategy.

And over the past four months, he’s taken some of his own money out of crypto investments and committed it to testing his program.

Teeka also asked his team to help him test this idea as well. It was made up of real people with real money on the line.

And tonight at 8 p.m. ET, he’ll reveal full details of his quant system. And he’s inviting you to join him.

So come join Teeka tonight at 8 p.m. to find out how you can use these math-based systems to generate thousands of dollars in extra income every month.