Chris’ note: Tomorrow at 8 p.m. ET, colleague Teeka Tiwari will unveil his first-ever algorithmic trading system – on camera. And so far, nearly 35,000 of your fellow Legacy Research readers have signed up to attend.

One of the reasons there’s so much interest in Teeka’s new system is it can generate immediate income – up to $12,000 a month in live testing. And as he shows below, thanks to the Fed’s “war on savers,” that’s now more important than ever.

Three months later, the U.S. economy collapsed under the weight of a national meltdown in housing prices. Riding to the rescue, the Federal Reserve cut interest rates to nearly zero.

That’s the lowest level it’s ever been in the 243-year history of the United States.

The Fed believed ZIRP would encourage folks to borrow and invest in riskier assets with higher yields. This “wealth effect” would then stimulate the economy.

The policy did eventually help pull the U.S. out of a recession. But there were unintended consequences. And they’ve hit savers hard.

Today, I’ll tell you what they are – and more important, what you can do about it…

As I’ve been warning my Palm Beach Research Group readers, there’s a war going on.

It’s not a shooting war. It has nothing to do with the Middle East. But you’re paying for it.

Since the Great Recession, ZIRP has made it difficult for ordinary Americans to find safe income investments with a decent yield.

Today, the rate on the benchmark 10-year Treasury note is hovering above 1.9%. That’s less than half its 100-year historical average of 4.6%.

But for some savers, rates are even worse. According to personal finance website Bankrate.com, the most common interest rate on checking accounts is 0.01%. 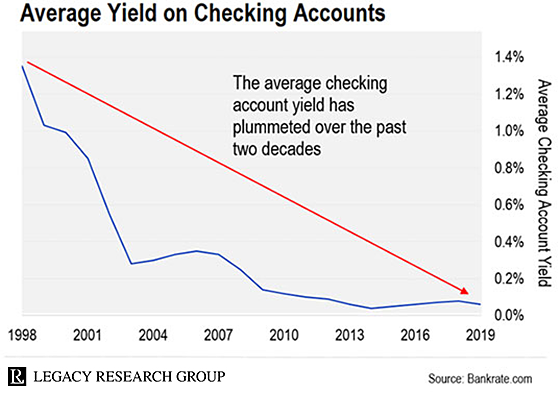 And it’s not just checking accounts…

Across the board, conventional income-paying investments are yielding historically low rates. Here are the average interest rates banks pay on deposits of less than $100,000:

Friends, if you’re looking for income on your investments, you have few options in today’s market. So if you want to retire with dignity, you’ll need a new game plan.

The good news is I’ve found a way to take back control of your own financial future without putting your current financial position at risk.

It all has to do with creating a large, safe stream of monthly income.

It may seem paradoxical. But the surest way to build a large fortune is to first secure a large, steady stream of income.

The more “safe” income you build… the more “free” income you’ll have to put toward high-risk, high-reward speculations. These can explode your wealth higher… without putting your current lifestyle at risk.

The other benefit of having a large income stream is you can use it to splurge on the things that make life even more fun. That could be a new boat, exotic vacations, or just a little extra cash each month to help out the kids and spoil the grandkids.

Point is, when you have a steady income source (separate from your employment or main source), you’ll have so many more options in your life.

One of the ways I do this in my own life is I maintain a portfolio of rental properties.

Rental real estate is one of the best income-generators available. Next to business ventures, the sector that’s contributed most to my net worth is real estate.

There’s no substitute for rental real estate in a well-diversified portfolio. It offers diversification, huge tax benefits… and cash flow.

So, if you’re looking for income, make sure you’re investing part of your wealth in there.

And if you’re looking for something that requires less capital – and much less time – I have exciting news for you.

My team and I have spent the past two years researching an investment method that can give you a shot at bringing in five figures a month in profits.

It’s based on hundreds of years of market history. The trades are driven purely by algorithm. There’s no human intervention required.

I virtually guarantee you’ve never had access to something like this. And I’m very excited about it. It’s so accurate – and so profitable – I even took some of my money out of my crypto accounts to commit to it.

There’s too much involved to explain to you in full here.

But tomorrow at 8 p.m., I’ll share with you the full details – on camera.

If you’re willing to put in 12 seconds per trade for the chance to make $12,000 or more each month in extra income, then you’ll want to join me.

And to prove its effectiveness, I’m willing to give everyone who attends my special event their first trade recommendation for free.