Before we start, a quick thank you…

If you were one of them, thanks for joining us. We know your time is precious. So we appreciate you making the time to join Teeka’s extended webinar training.

Last night, he revealed what his system is all about. And how it’s predicted most of the major moves in the Dow over the past two decades.

He also showed how it takes all the emotion out of investing and instead focuses on cold, hard math…

Don’t worry if you missed it. As a Daily Cut reader, you can catch the full replay here.

Today, I (Chris) want to show you Legacy Research’s secret weapon for finding the best stock of the year.

Those are already long odds.

And as you’ll see today, it confirms something Jeff has been pounding the table on for years: One of the best… and easiest… ways to make money in the tech boom is to buy best-in-breed chipmakers.

But first, if you don’t know Jeff already, a quick introduction…

For three decades, he’s been a member of Silicon Valley’s “in” crowd…

He was an executive at some of the most successful tech firms in the world – including Qualcomm, Juniper Networks, and NXP Semiconductors. And these days, he’s a formal advisor to eight early stage tech startups.

Jeff is also a member of the Chamber of Digital Commerce, which regularly advises the U.S. and foreign governments on blockchain technology.

But he’s more than just a hardcore tech geek. He’s also a tech investor… with an insane track record. Jeff has invested in 105 private tech deals.

He flew down to join Legacy Research cofounder Bill Bonner and me at Bill’s resort on the Pacific Coast of Nicaragua.

We were there for an annual gathering of our wealthiest Bonner & Partners subscribers.

He showed the extraordinary changes happening with bleeding-edge technologies… and how the sector was set to rally for decades as a result… And he urged everyone to buy shares of specialized chipmaker Nvidia (NVDA) as a way to profit from the boom ahead. 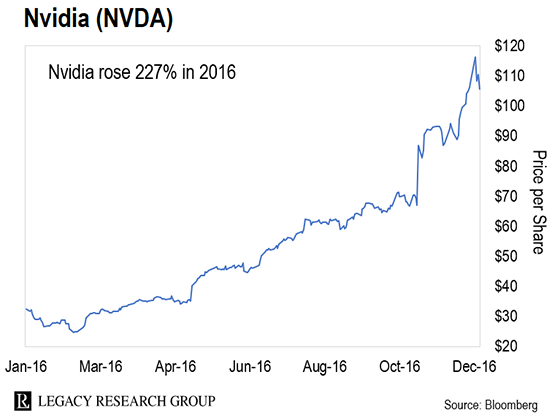 And Jeff wasn’t done picking winners in the sector…

In November 2017, he recommended another chipmaker, Advanced Micro Devices (AMD), to readers of his Near Future Report advisory. 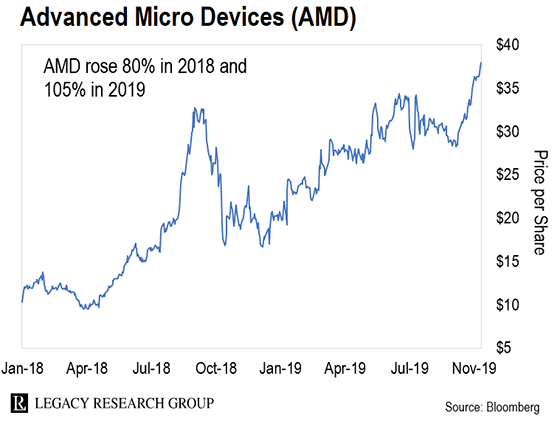 And the streak continues this year.

So well done if you bought on Jeff’s recommendation. After two years of turbo-charged gains, AMD is now up 245% in the model portfolio.

Jeff continues to see bright things ahead for AMD and Nvidia…

That’s because they’re critical components of some of the biggest trends in tech.

Take artificial intelligence (AI). As we’ve been showing you here at the Cut, it’s going to change the world in ways we’re only starting to fathom.

For instance, AI pilots will drive self-driving cars and drones.

AIs will also help us figure out unsolved problems, such as how to create nuclear fusion… or how to cope with changes in the Earth’s climate.

AIs will help us feed the world’s growing population. From detecting pests on crops… to figuring out what crops will deliver the best yields… to predicting the exact moments of ripeness for fruits and vegetables… AI will change farming for good.

AIs will even help improve schooling. For instance, they’ll be able to do the tedious task of grading, freeing up human teachers to spend more time with students.

AI is the most disruptive technology of our age… by far. People will look back and see these breakthroughs that we’re having right now in artificial intelligence as the next revolution. AI technology will remake our society in ways we can’t yet predict.

None of this can happen without a special kind of chip…

Without getting too deep in the weeds, AIs don’t run on the kind of central processing unit (CPU) that runs your PC, laptop, tablet, or smartphone.

Instead, they run on the graphics processing units (GPUs) that Nvidia and AMD specialize in.

These were originally developed to render rich, fast-moving graphics for computer games. And they can perform millions of operations, in parallel, at the same time, which is crucial for AI.

As Jeff puts it…

This unassuming piece of hardware will unlock the biggest technology trend of 2019… and possibly our lifetimes – pervasive AI.

GPUs also play a key role in the crypto revolution…

Jeff believes we’re only at the start of the revolution that’s underway in cryptocurrencies… and the decentralized “blockchain” technology that underpins them.

And GPUs are the chips that power crypto “mining” operations.

Don’t let the name throw you off.

It’s called mining because the world’s first blockchain, the bitcoin blockchain, was created to mimic the gold standard money system.

And in that system, gold had to be mined before it was used.

But crypto miners don’t do any digging. They don’t drive yellow dozers. And they don’t need to know any geology.

The key hardware component in blockchain networks is specialized computers. They are typically servers that are rack-mounted one after the other. These servers are also often called mining “rigs.”

Contained within these servers are two critical kinds of chips. One of these is a GPU. It’s used to provide the computational power to solve the mathematical problems required to add new records to blockchain.

And… you guessed it: AMD and Nvidia make the GPUs that power these rigs.

Right now, these stocks are above Jeff’s buy-up-to prices…

That means now is not the time to pull the trigger and buy.

But if NVDA drops below $180 a share… or AMD drops below $37… they’re great long-term additions to your portfolio.

AI and blockchain are going to revolutionize our world. And as that happens, stock prices for these chipmakers will soar.

And remember to head over to Teeka’s extended webinar training…

As I mentioned up top, more than 13,000 people showed up to find out how to make money in the markets using pure math.

It was a real eye-opener. Even if you don’t think you need an extra $12,000 in income a month, it’s a fascinating insight into one of the world’s most successful investing approaches – quant investing.

Here’s that link again to catch the full replay.