This week, I’ve been spotlighting the newer members of team and their big ideas about how you can move the needle on your wealth. Nomi joined us in December 2021. And judging by your feedback, her insights into the water crisis – and what it means for investors – have been hugely popular.

Yesterday, she showed why aging water infrastructure and extreme droughts are drying up water supplies. And she revealed how billions of dollars will flow into the sector as we make critical upgrades to our water system.

Today, she looks at how water infrastructure stocks have been a great place to invest over the past decade. And she passes along a “one-click” way to get exposure to this powerful market trend.

Yesterday, I put a disturbing trend on your radar – the global water crisis.

And this year, it’s gotten a lot worse.

In China, for instance, the Yangtze River – Asia’s longest river – is drying up.

This is not only parching farmland that depends on the river for water. It’s also causing rolling blackouts and factory closures in the southwestern Sichuan Province. That’s because of the loss of hydropower.

And here in the U.S., the water crisis is reaching critical levels.

About half of the lower 48 states in the U.S. have experienced extreme droughts this year.

This is causing water shortages. The American West has been especially hard hit. It’s experiencing critical power shortages and water scarcity fears. The two largest reservoirs in the U.S. – Nevada’s Lake Mead and Lake Powell in Arizona – are both at their lowest levels since they were first filled.

Also, the lack of rainfall is putting U.S. farms at risk. A survey by the American Farm Bureau Federation looked at 15 states across the western U.S. It reported 74% of farmers are suffering lower harvest yields because of drought conditions.

But help is at hand…

Billions of dollars are about to flow into water infrastructure companies that can solve these problems.

One of the most troubling hotspots right now is the Colorado River basin.

The Colorado River system is at about 30% of its peak capacity… down from 40% last year.

This is having devastating effects on the two reservoirs it feeds into – Lake Mead and Lake Powell.

Lake Mead is the largest reservoir in the U.S. – holding up to 9.3 trillion gallons of water.

It provides water to about 20 million people in Arizona, California, and Nevada as well as some of Mexico. It also a huge source of water for farming.

And thanks to the decades of relentless drought, Lake Mead is now at about 30% capacity.

It’s a similar story with Lake Powell, the nation’s second-largest reservoir. It’s at about a fifth of its peak capacity right now.

This is having knock-on effects on hydropower generation. Both lakes are part of the Hoover Dam hydropower system. It’s responsible for producing about 4,500 gigawatt-hours each year of power for 1.3 million people across Nevada, Arizona, and California. (One gigawatt is enough to power about 750,000 homes.)

If these lakes get too low, the dam’s turbines don’t spin. And they can’t generate power.

The “minimum power pool level” is the point at which all hydropower generation stops.

The U.S. Bureau of Reclamation (“USBR”) warns we could see this level by 2026. And it says there is a one-in-four chance Lake Powell could reach that level as soon as 2024… less than two years from now.

We’ve been using more water than the river can replenish for decades. But the 20-year “megadrought” in the West – and its extreme severity this year – has brought that home.

The USBR says states in the region will need to conserve between two and four million acre-feet of water in 2023.

That’s at least seven times the amount of water Nevada is allowed in a year. And that’s just to ensure the dams maintain minimum levels.

That means tough decisions about water use.

One thing is clear… We need more water. That means massive injections of investment in water infrastructure.

Without them we won’t avoid even worse water, food, and power shortages.

And it’s already starting to happen…

Water infrastructure bills worth $125 billion are either already law or making their way through Congress.

As always, where government money flows… Wall Street is sure to follow.

That means hundreds of billions of dollars more in Wall Street cash will rush into the sector.

And the track record of water infrastructure stocks will make it even more attractive. 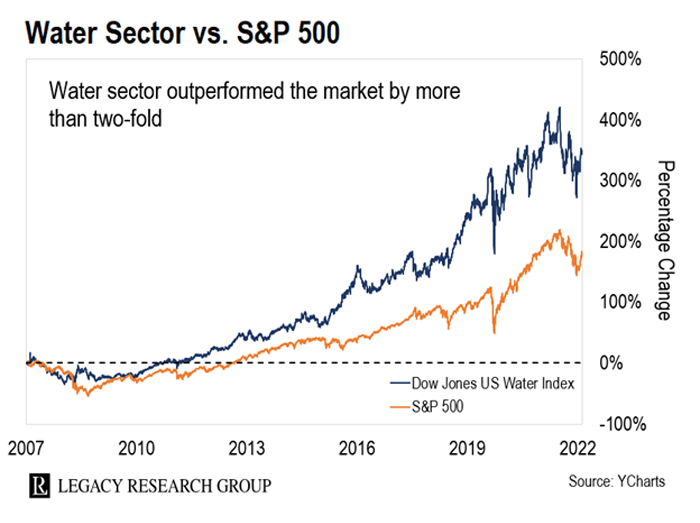 That’s an impressive outperformance for a sector most folks overlook.

And we can expect even higher gains for water stocks over the next decade as the water crisis grabs more attention… and investment ramps up.

I’ve recommended a water stock to readers of my Distortion Report advisory. (Paid-up Nomi subscribers can catch up in full here.)

It’s investing in building out the infrastructure and networks needed to get clean water to communities across the country.

And it already provides drinking water and wastewater services to about 14 million people in 24 states.

Now, out of respect for my paid-up subscribers, I can’t give the name away here. But there is a way you can get broad exposure to this trend – whether or not you’re already paid-up.

One way to invest in companies that are working to avert this crisis is the Invesco Water Resources ETF (PHO).

It holds 37 stocks across the water sector. So you’re not going to knock the lights out by picking the best stocks from the sector. But as investment dollars flow in, it will lift companies across the sector.

Another Crisis on the Horizon

We’re also at risk of a massive energy shock.

Energy prices are up 33% in the last year. And unfortunately, things are likely to get worse this winter.

That sounds scary. But for folks who are prepared will make it through. And if you know where to look, you can protect your portfolio – and profit.

I’ll do a deep dive into the coming “energy shock,” and what you can do to prepare. Plus, I’ll share details on a small, publicly traded firm that could hold the key to solving a major problem in the energy crisis.