Jackson Hole is best known as a tourist spot…

The Wyoming town is home to a world-class ski resort.

It’s also a jumping off point for visits to the Bridger-Teton National Forest.

But Jackson Hole has also found itself at the center of some of the most heated economic debates.

That’s because the world’s most powerful central bank – the Federal Reserve – has held its annual conference there since 1982.

And Fed boss Jay Powell used this year’s event to hammer home his commitment to raising rates to bring down inflation.

And the tech-heavy Nasdaq fell nearly 4% – its worst trading day since June 16.

So today, we’ll look at why Powell has put the bulls on the back foot again.

And I’ll show you why should treat the Fed’s crusade against inflation with a large dollop of skepticism.

The Fed has jacked up interest rates four times since March…

And since then, the economy has fallen into recession… and the S&P 500 has plunged into a bear market.

But Powell says he’s not backing down. As he put it in his speech in Jackson Hole…

While higher interest rates, slower growth, and softer labor market conditions will bring down inflation, they’ll also bring some pain to households and businesses. These are the unfortunate costs of reducing inflation. But a failure to restore price stability would mean far greater pain.

Interest rates are a powerful lever for stock market prices. And this makes sense when you think about it…

Every investment you make has an opportunity cost. When you tie up your money in stocks, you’re not investing in other assets.

Wall Street analysts factor this into their models when they’re valuing stocks. They don’t just ask what gains a stock will likely deliver. They also ask what investors are missing out on by having their money in a stock.

That’s why rising interest rates are bearish for the stock market.

The higher the Fed sets rates… the higher the yield you can earn in the bond market. That pushes up the opportunity cost of owning stocks.

Analysts use the yield on the 10-year Treasury note to discount a stock’s worth.

As interest rates climb, so does the “discount rate.” Stock market valuations fall. This weighs on stock prices.

Inflation remains high at 8.5%. But we recently got some good news on that front.

Wholesale prices… along with import prices… have dropped. So have Americans’ inflation expectations.

And in May, the Fed’s favorite inflation gauge – the Personal Consumption Expenditures (“PCE”) index – began to cool off.

This led to rising hope among investors that the Fed would soften its stance on inflation… or at least raise rates at a gentler pace.

And it helped fuel a rally on Wall Street.

But on Friday, that optimism vanished. 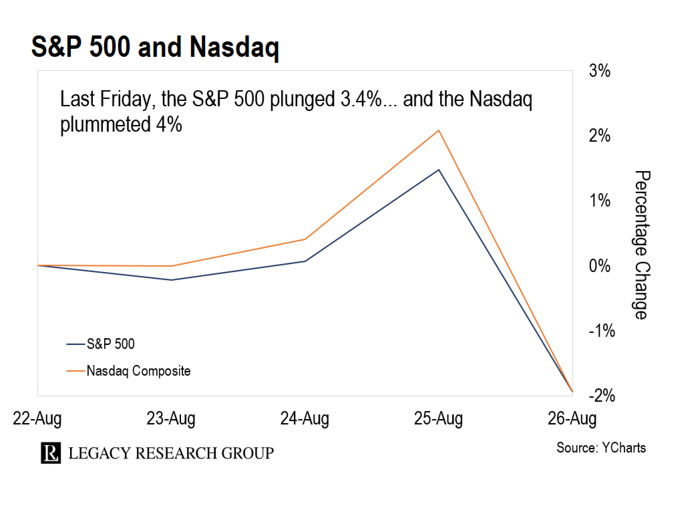 Investors realized that a rising discount rate is going to pummel stock valuations. And they bailed on their positions.

That’s according to an unusual school of thought from Warren Mosler.

He’s now a sort of rogue economist. But he started a career in banking in the early 1970s.

Then, in 1982, he cofounded a successful investment fund called Illinois Income Investors.

Illinois Income Investors had only one losing month in the 15 years Mosler was at the helm. And financial newsletter MARHedge ranked it No. 1 in the world through 1997, when Mosler left.

Later, he developed his own supercar – a type of high-performance sports car. His model was a supercharged, intercooled V8 called the MT900S.

Mosler sold one of his first models to Star Wars creator George Lucas. But he’s best known for his insights into the fiat monetary system.

And what he’s discovered is stranger than you could imagine…

Mosler has scandalized mainstream economic experts with his ideas…

That’s because he’s challenged some their most widely held beliefs.

He says, for instance, that a government that issues its own currency can never run out of it. So currency-issuing governments – like America’s federal government – can’t go broke like a household or a business can.

He also says raising interest rates injects more cash into the economy than it sucks out. So it’s not a great way to fight inflation.

But Mosler says that’s only half the story. Higher interest rates also mean more cash for savers in the form of higher interest payments. Because yields on bonds and bank accounts go up.

And collectively, U.S. households earn more interest on savings than they pay on borrowings.

So the net effect of higher rates is that households have more, not less, money to spend.

It’s all in this chart Mosler tweeted…

It’s a chart of personal interest income on assets from the Fed. 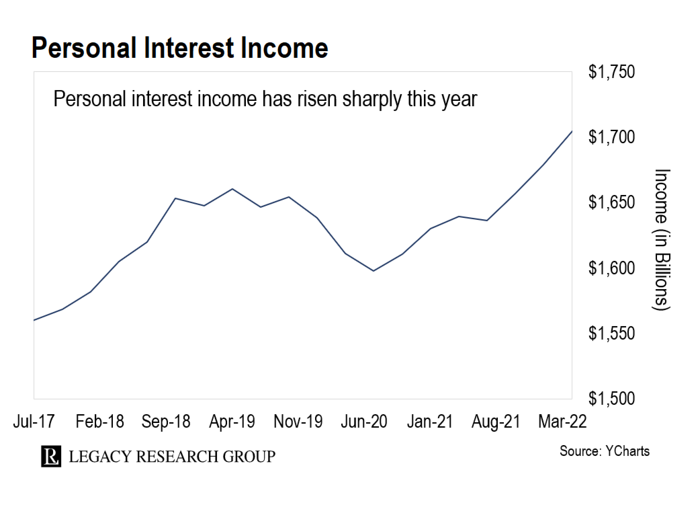 As you can see, personal interest income has risen sharply this year as the Fed has raised rates.

And it’s hard to see how making folks richer makes them spend less.

I know this is a controversial take…

Most everyone you talk to… including the more than 400 economics PhDs on the Fed’s payroll… will dispute it.

But you don’t run a No. 1 ranked hedge for 15 years… or build award-winning supercars… without some serious smarts.

Sure, his ideas on interest rates go against everything the Fed claims is true about inflation. But it’s logical.

And if he’s right, it means disaster for investors. Rising rates will bring lower stock prices and higher inflation.

So now is not the time to let your guard down…

After the rally off the June low, stocks could be in for another plunge.

Meanwhile, inflation is likely to stay high. The Fed may think it’s bringing down inflation by raising rates. But that’s debatable.

So it’s critical you stay away from the traditional 60/40 portfolio most mainstream advisors tout.

The idea is you invest 60% of your wealth in stocks, which tend to do well during good times. You also invest 40% in more defensive bonds.

The problem is bonds tend to do badly when inflation is high. That’s because over time, it eats away at the buying power of the income they pay out.

That’s why colleague Teeka Tiwari revealed a new way of building a diversified portfolio to better protect you from inflation… while still allowing you to grow your wealth.

I recommend all Daily Cut readers check out this new asset allocation model.

I wrote about it in detail last month. But if you missed it, you can catch up in full in Daily Cut archives here.