Chris’ note: Today, we continue our focus on the newer members of the Legacy Research team with an insight from Nomi Prins.

She worked at Bear Stearns, Lehman Brothers, and Goldman Sachs. Now, she dedicates her life to helping regular investors beat Wall Street at its own game. And she focuses on five big-picture themes – including the infrastructure boom.

That led her to research the global water crisis. Record heatwaves and droughts are devastating large parts of the planet. This is threatening our supply of drinking water.

As Nomi explains below, in the first of a two-part essay, extreme weather isn’t the only problem. It’s also our crumbling water infrastructure.

Fortunately, this won’t last long. As you’ll see, billions of dollars are going toward a massive water infrastructure upgrade…

And it’s drying up…

And here in the U.S., water scarcity is reaching critical levels due to extreme heatwaves.

Earlier this month, more than one-third of the country… and half of the lower 48 states… was in drought.

That’s the story you hear on cable news. But there’s also another, often hidden, issue…

The water infrastructure in this country – think reservoirs, treatment plants, and millions of miles of water pipelines – is crumbling.

So we’re losing some of our supply of precious drinking water.

A report last year by McKinsey revealed that, on average, we lose 14% to 18% of total daily treated drinking water in the U.S. to leaks. And some water systems are reporting water loss rates of 60% or more.

Today and tomorrow, I’ll shine a light on this emerging crisis. And I’ll show you what it means for us as investors.

On the Brink of a Massive Crisis

First, let me give you a better sense of how scarce drinking water is. 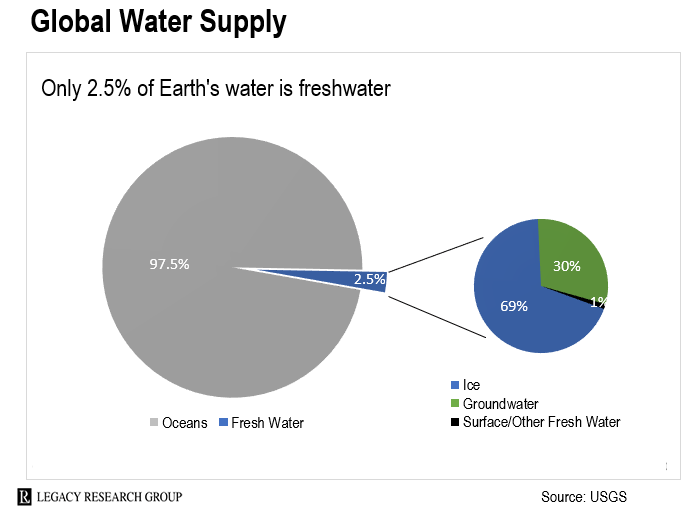 The other 2.5% is fresh water. But just 1% of all the fresh water in existence is available and drinkable.

So when it comes to fresh water, access and distribution are critical.

But today, about four billion people experience severe water scarcity for at least one month of the year. That’s nearly two-thirds of the global population.

Now, most of the world is teetering on the brink of a massive water crisis. 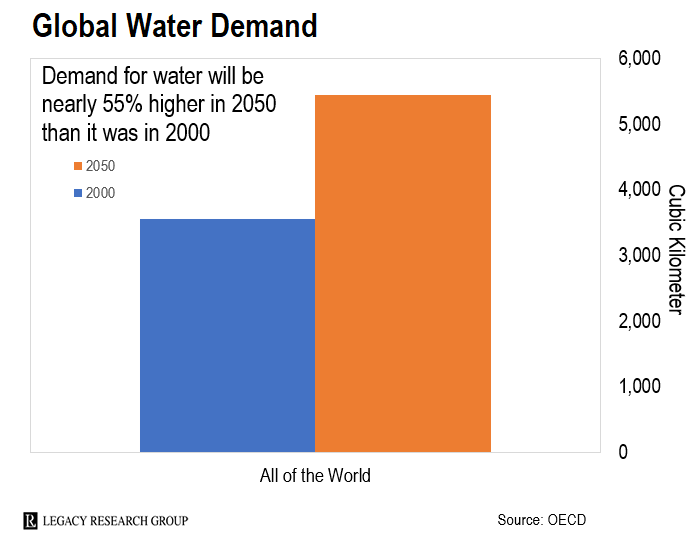 The Organization for Economic Co-operation and Development (“OECD”) forecasts that we’ll use nearly 55% more water in 2050 than we did in 2000.

One of the main problems is population growth.

And the more the world’s population grows, the more of everything we’ll consume – especially water and food.

Today, farming uses about 70% of the world’s fresh water supply.

Drought is also a problem.

You may have seen on the news that the Rhine River, Europe’s most important commercial waterway, is critically low. This has stopped Europeans from moving goods and key commodities along the river.

And it’s not just the Rhine. Europe is facing its worst drought in at least 500 years. Two-thirds of the continent is in a state of alert or warning.

Meanwhile, the Yangtze River – the longest in China – is also in trouble. A heatwave has roasted the river basin these past two months. And it’s brought the hottest temperatures in 60 years.

This has triggered rolling blackouts due to disruptions to hydropower. It’s also parched large swaths of farmland. Authorities in the region are now scrambling to find fresh water to irrigate crops ahead of the autumn harvest.

And things are about to get worse, not better.

The U.N. reports that drought frequency and duration has already increased by 29% since 2000.

If current water usage trends continue, it’s warned that 75% of the world could face drought by 2050.

That’s just 28 years down the line.

The most acute water challenges are in the developing world.

But even developed countries are facing problems. That’s partly because of poor water infrastructure.

Much of the water infrastructure in the U.S., for example, is more than a century old. A lot of it is badly deteriorated.

The American Society of Civil Engineers reports a water main break roughly every two minutes. As a result, six billion gallons of treated water are lost – a day. That’s enough to fill more than 9,000 swimming pools.

This also affects the quality of our water. We need multibillion-dollar investments just to remain compliant with today’s water safety standards.

In California, where I live, water scarcity is a constant threat.

Before the summer, two of its largest reservoirs were at low levels. Now, after the most extreme drought conditions in more than a century, its reservoirs are at critically low levels.

And even as it faces this water crisis, water usage across the state is increasing. This is despite pleas from state and local governments for homes and businesses to cut their water use.

It’s clear we need more water. For this to happen we need massive injections of capital into upgrading our water infrastructure.

That’s what makes this interesting to us as investors.

I spent 15 years working for some of Wall Street’s most elite institutions – including Lehman Brothers, Bear Stearns, and Goldman Sachs.

And I learned a simple lesson over that time: Where government money flows, Wall Street is sure to follow.

So one of the best ways to make outsized gains is to get into sectors where the money is flowing ahead of the crowd.

We’ve seen an increase in government bills and contracts in the water and wastewater industries in recent years.

They focus on upgrading, repairing, and building out critical water infrastructure. That will improve the quality of the water we drink… and make sure we have enough to go around.

In December 2020, we got the bipartisan Water Resources Development Act. It directs $10 billion in federal investments into water infrastructure projects across the country.

And last November, the House passed the Infrastructure Investment and Jobs Act with bipartisan support.

Its price tag came to $1.2 trillion. It earmarks $55 billion for expand funding for water investments. That means improving access to drinking water as well as wastewater and stormwater infrastructure.

And in July, the House passed another bipartisan water infrastructure bill – the $25 billion Water Resources Development Act. I expect this to become law and provide even more funding to the water industry.

And as you’ll see tomorrow, that’s made water infrastructure stocks a great way to compound wealth.

These are the companies helping avert the crisis. And you can profit as they fulfill that mission. Tune in tomorrow for more on how you can play the infrastructure build-out.