Water shortages are causing drought and disruption across the globe.

Lake Mead straddles Nevada and Arizona. And roughly 25 million people depend on it for their water.

But the lake is now at its lowest level since it first became a reservoir almost 90 years ago. It’s part of the Western U.S.’ most extreme long-term drought in at least 1,200 years.

In Europe, the Rhine River is one of the most important commercial waterways. It’s dried up so much it’s now too shallow to transport key commodities such as diesel and coal.

Later in today’s dispatch, colleague and former Wall Street insider Nomi Prins shows why an investment in the water sector is a profit opportunity you shouldn’t miss.

But first, we hear from colleague Jeff Brown.

Reader question: Why aren’t our leaders in this country looking at desalination plants along our Pacific coast to help remedy the ongoing drought in the Western USA?

Jeff’s response: Hi, Donny. Thanks for writing in. The drought is a complex issue. It desperately needs innovative solutions.

Between the population that lives in those regions and agricultural use, many states don’t have enough water.

And you’re spot on. The technology exists to build desalinization plants that turn salt water into fresh water. But the U.S. is doing nothing about it.

A great example of how desalination can help is in Israel. It’s leading the world in this tech.

Over the last two decades, Israel built five desalinization plans. These produce about 600 million cubic meters of water a year. That’s enough to supply a year of water for 2 million homes.

Two more Israeli plants will be operational by 2023. These will bring online another 300 million cubic meters of water a year.

With all seven plants up and running, desalinated water will provide up to 90% of Israel’s water needs.

Israel has also been smart in how it manages its wastewater. It has 230 reservoirs that store treated wastewater. They provide about 260 million cubic meters of water for the agricultural sector.

These are amazing achievements for a desert country. And they’ve been highly effective. There’s no reason that the U.S. couldn’t achieve something similar.

But desalination plants are also energy hogs. Depending on the technology, turning a cubic meter of saltwater into fresh water can take up to 10 kilowatt hours of power. That’s enough to power a household for about 10 hours.

I would prefer to see us power desalinization plants with clean energy sources such nuclear fission or nuclear fusion – preferably fusion, as that has little to no radioactive by-products. This would be the most efficient, cleanest way to solve the problem.

MIT fuels some of its research with solar power. And San Diego’s Carlsbad Desal Plant uses solar power rather than fossil fuels. Solar is less efficient than nuclear fusion, but it works… just not at the scale we need.

And there are some things we can do to reduce overall water consumption, especially in agriculture. Micro-irrigation tech waters plants at their roots. This uses as much as 50% less water than traditional sprinkler irrigation.

Donny, I share your concerns. Our “leaders” talk about clean energy and sustainability, while upping the use of dirty fuels like coal to 25% of all electricity production in the U.S. after a decade of decline.

And they push electric vehicles as a clean energy solution. But the electricity to fuel those comes primarily from coal and natural gas.

Makes no sense at all.

Water is the world’s most valuable resource. So it may seem strange that investors overlook it. Especially since, as you’ll see, the water sector nearly doubled the returns of the broader stock market over the last 20 years.

But it’s front and center on Nomi’s radar.

She worked on Wall Street for 15 years – with stints at Chase Manhattan Bank, Lehman Brothers, and Bear Stearns. She was even a managing director at Goldman Sachs (GS).

Now, she uses the skills she learned there to tap into what’s next for the economy and the markets – and show everyday investors how to profit.

Investing in water is investing in our collective future. And it’s necessary.

Government bills and contracts have increasingly gone to the water and wastewater space in recent years.

In December 2020, President Trump signed the bipartisan Water Resources Development Act into law. It directs $10 billion into water infrastructure projects across the country.

In April 2021, the Senate passed the Drinking Water and Wastewater Infrastructure Act. It allocates $35 billion toward state water infrastructure programs.

And last November, President Biden signed the Infrastructure Investment and Jobs Act into law with bipartisan support. It sets aside $55 billion for water investments. That means improving access to drinking water as well as wastewater and stormwater infrastructure.

Then, last month, the House passed another bipartisan water infrastructure bill – the $25 billion Water Resources Development Act. I expect this to pass into law, too.

As always, wherever government money flows, Wall Street is sure to follow.

And the sector’s track record will make it even more attractive to investors. 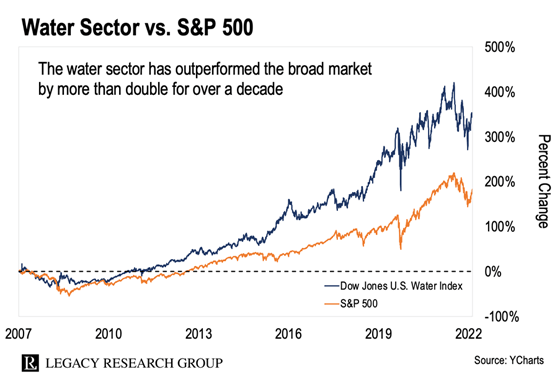 This chart compares the performance of the water sector, represented by the Dow Jones U.S. Water Index, and the broad S&P 500.

As you can see, the water sector has outperformed the broader market for over a decade. Since July 2007, it’s done 166% better.

We tend not to think about water as an investment. But we should. Water crises will force investors to reevaluate this most basic resource. This will bring outsized demand to water stocks in the coming years.

Forecasts show the global water treatment market expanding from $302 billion this year to $489 billion in 2029. That’s growth of more than 60%.

You can profit from this trend by investing in utilities or companies that purify, recycle, conserve, and distribute clean water.

One way to get broad exposure to this sector is through the Invesco Water Resources ETF (PHO). It holds 37 names across the water sector and manages $1.8 billion in assets.

We wrap up today some thank-you notes from Nomi subscribers who saw her recent Q&A with Peter Zeihan.

Peter is one of the world’s top geopolitical strategists. He founded and runs the consulting firm Zeihan on Geopolitics, where clients include energy companies, financial institutions, farmers, and the U.S. military.

He’s also a bestselling author. And he just released a new book, The End of the World Is Just the Beginning.

It maps out a world in which global trade breaks down… and regions have no choice but to make their own goods, grow their own food, secure their own energy, and fight their own battles – all with populations that are both shrinking and aging.

Subscribers who saw it were blown away…

Reader comment: Nomi, simply exceptional discussion between Peter and you. Thank you for presenting this for your subscribers. I hope we have some government officials and relevant businesses wise enough to address the important issues of transition you raised in your talk.

Reader comment: Thank you for this deeply enlightening interview. Peter seems to be ahead of his time and is fascinating to listen to. I cannot wait until your next interview with him. Excellent choice. Thank you.

Reader comment: Wow, well done! I just finished the entire 43-minute interview and am looking forward to Part 2. Such an interesting conversation – with smart questions and in-depth answers. Thank you!

If you’re a Nomi subscriber, you can catch the full video interview here.

That’s all for this week’s mailbag edition.

If you’d like to put a question to the Legacy experts, be sure to get in touch at [email protected].