Joe Biden is (kind of) right about inflation…

We got new inflation numbers yesterday.

And as you may have seen in the news, the president got into hot water over his claim that there was “zero percent inflation in the month of July.”

Ted Cruz, for instance, accused Biden on Twitter of “cruel gaslighting.” And he pointed out that the annual inflation rate was 8.5%.

Twitter didn’t show the nuance… But Biden and Cruz are both right.

Inflation is up 8.5% annually… AND it was flat in July.

As always, the political posturing from Democrats and Republicans is a distraction.

What matters for us as wealth builders is that, after 16 straight months of price rises, inflation was flat for July.

Stock market investors were certainly paying attention to this news.

The tech-heavy Nasdaq shot up 2.9% yesterday as investors celebrated the first good inflation news in a long time.

The common definition of a bull market is a 20% or more rise from a low.

This puts a question we’ve been grappling with lately in these pages back on the table. Is the bear market that’s been raging for most of 2022 over?

As I’ve been reminding you, rallies like this are common in bear markets…

The Nasdaq may be up more than 20% off its low. But that doesn’t mean we’re out of the woods yet.

Look what happened to the Nasdaq during the tech wreck in the early 2000s. 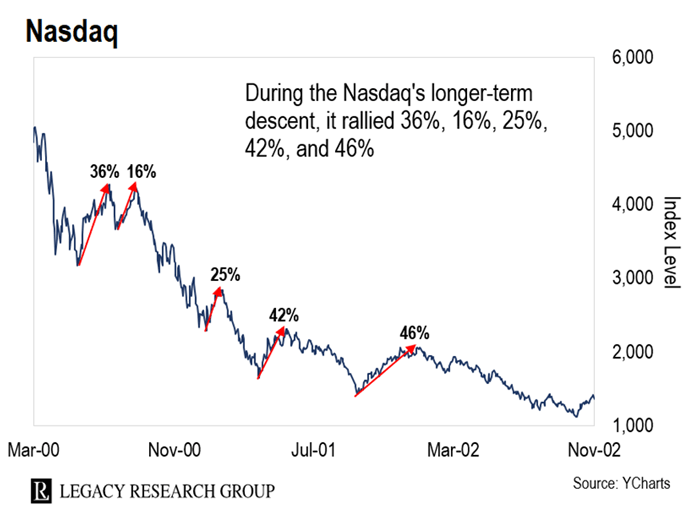 Each time, folks who bought the rallies got wiped out.

Don’t get me wrong. After the beating we took in the first half of the year, it’s good to see this rally. But we’ll leave the champagne bottles closed for now.

We’re not celebrating the death of inflation yet, either…

The CPI is made up of a basket of goods and services. Their prices don’t move in lockstep.

But food prices jumped 1.1% monthly. And we had a 0.5% rise in shelter costs – which make up a third of the CPI basket.

So even if the bulls are right… and we just hit peak inflation… there’s a long way to go before inflation is back down to a level the Fed is happy with.

The Fed’s target inflation rate is 2%. We’re still more than 4x that.

As he puts it…

Everything about the economy right now comes back to one thing: inflation.

It’s an economic problem. But it’s also a political problem. And for your wealth, it’s a huge personal problem.

Obscene money-printing and inflation have twisted the normal rules of money. For most folks, that means pain. That pain will come as a real and persistent loss of the buying power of their savings.

And traditional retirement vehicles like stocks and bonds won’t cut it anymore. In this new reality, you need to rethink your ideas about investing and saving for retirement.

Longtime readers will know all about Teeka.

But if you’re just joining us, he’s a former hedge fund manager who heads up our Palm Beach Research Group division.

He’s best known as our “crypto guy.” That’s due to the triple-, quadruple-, and even quintuple-digit winners he’s delivered in the model portfolio at our crypto-focused Palm Beach Confidential advisory.

There, he focuses on helping the not-yet-rich become wealthy through a mix of asset classes.

He’s built arguably the most successful track record in our industry with this approach.

Since he took the helm in 2016, the average annual gain of The Palm Beach Letter model portfolio is 141.6% – even with the current market pullback.

And Teeka recently updated his recommended asset allocation mix to help his readers profit even as inflation rages.

He had an epiphany about it at the Miami Grand Prix…

Teeka is a Formula 1 fan. At a race in May, he spoke to a bunch of ultra-wealthy individuals about what they were doing with their money. 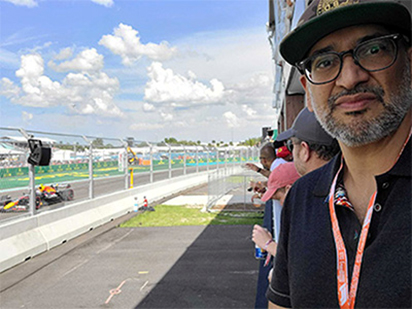 Teeka at the Miami Grand Prix

Here’s what he reported back to his readers…

Like you and me, today’s ultra-wealthy are concerned about inflation. In fact, a recent report by global wealth consultant Knight Frank revealed it’s their No. 1 concern.

But to protect their wealth, they’re not buying stocks and bonds as mainstream advisors urge. Instead, the ultra-rich I spoke with in Miami are buying alternative assets.

These include less traditional investment options such as private equity and cryptocurrency. They have huge upside potential. So you don’t have to invest large stakes to have the chance at life-changing gains.

They also include scarce assets that rise along with inflation, including collectibles, art, and trophy real estate.

That’s why the wealthy are allocating gobs of capital to assets outside the stock and bond portfolios most regular investors have.

You should do the same…

There’s nothing you can do to stop government money-printing… fix strained supply chains… or reduce inflation.

But you can act to protect yourself against these problems’ wealth-eroding effects.

Teeka recommends a 30% allocation to alternatives.

These are easy to start adding to your portfolio right away…

As I wrote about in more detail here, you can buy “fractional shares” in contemporary art at MasterWorks.

With a fractional investment, the owner of an asset can list it on a platform and offer “shares” (or fractions of the asset’s value) to investors.

MasterWorks allows you to get fractional ownership in some of the world’s most desirable paintings for as little as $20.

You can also buy bitcoin (BTC). As we covered in yesterday’s dispatch, the world’s largest asset manager, BlackRock (BLK), just gave crypto a vote of confidence.

And Teeka says now is a great time to buy… before it begins climbing to $500,000 a coin. You can read more about that here.