On Thursday, we looked at how the government’s main measure of inflation, the Consumer Price Index (“CPI”), flattened in July after 16 straight months of increases.

That wasn’t the only good news.

Two other key inflation measures – wholesale prices and import prices – came in better than they were supposed to.

And something called the Survey of Consumer Expectations showed that most regular Americans expect inflation to fall dramatically from here.

This may not be the end of inflation. But after nothing but bad news for so long, it looks a lot like the beginning of the end.

And if it is, the rally in stocks that’s been underway for four straight weeks could become a new bull market.

We’ll get to why in a moment. First, a closer look at those inflation numbers.

Most folks have heard of the CPI. But you don’t hear much about the other three metrics. And they tell us a lot about where inflation is headed.

Wholesale and import prices are two main ingredients for inflation…

Rising wholesale prices threaten retailers’ margins. So they pass on the extra costs to their customers.

And last week, we learned that wholesale – aka producer – prices fell in July for the first time in two years.

It dropped 0.5% in July – its first fall since April 2020, the month the government declared COVID-19 a pandemic.

Most of this fall – about 80%, according to analysts – was due to sinking energy prices.

And as supply chains improve, wholesale prices should fall even more.

Meanwhile, the cost of imported goods fell 1.4% in July. That’s the first drop all year.

Americans see much lower inflation ahead…

That makes it something of a self-fulfilling prophecy.

If consumers expect, say, used cars to be more expensive a month from now… they’re incentivized to buy today.

This causes even more demand for used cars, which further drives up prices.

The same goes for other prices. The more you think the price of something will rise in price in the future, the more likely you are to buy now. This fuels further price rises.

That’s why the results from the last month’s Survey of Consumer Expectations (SCE) are worth noting. It shows that process reversing.

The SCE is a monthly survey of households by the Fed. It covers how much people expect to spend… and how high they expect inflation to be.

In July, the average household expected inflation one year down the road to clock in at 3.6%. That’s down from 6.8% in the June survey.

So peak concern about inflation is behind us… even if it’s still a hot-button issue in the media.

That’s around the time the Fed started signaling it would jack up interest rates to tame inflation.

When rates go up, so does the “discount rate.” It’s the yield you could earn on the 10-year Treasury note if you don’t tie up your money in stocks.

Wall Street analysts plug this into their models when they value a company’s future cash flows.

The higher the discount rate, the lower they value those cash flows.

This brings down stock market valuations and stock prices. 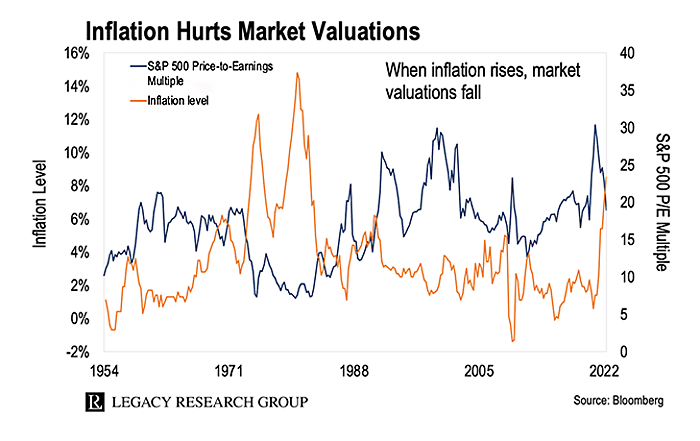 The P/E ratio tells us how much investors are willing to pay for every dollar in earnings. As the CPI goes up, the P/E ratio goes down. And vice versa. 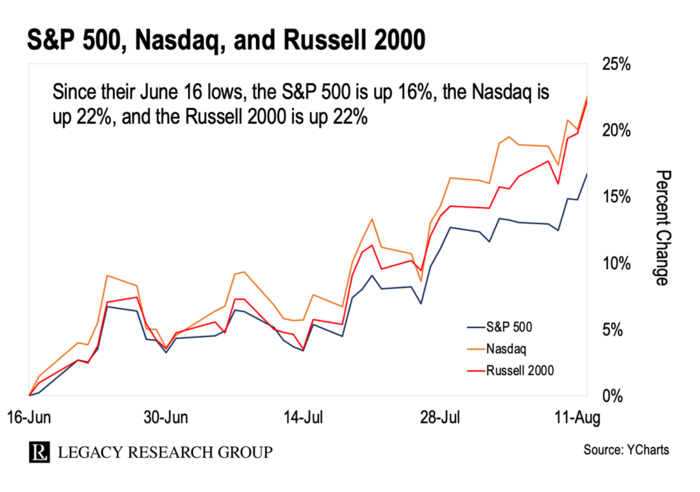 You’re looking at the large-cap S&P 500, the tech-filled Nasdaq, and the more speculative small-cap Russell 2000 Index since their June 16 lows.

All three indexes have now recovered more than half their losses from the bear market.

Does this mean the bear market has finished mauling investors?

As I have warned you, bear market rallies can be dangerous traps.

They don’t take stocks lower in a straight line. Along the way, we tend to see powerful, but short-lived, countertrend rallies.

Each rally lured investors back into stocks only to inflict more pain.

That’s why we’re not popping the champagne yet.

But for the first time all year, there’s reason to be optimistic. Inflation is starting to slow. And stocks are taking off.

The more good news we get on inflation… the more likely it is the rally sticks.