Is the stock market about to deliver a “Not Dead Yet!” scare?

It’s one of the most overused movie cliches.

The audience breathes a sigh of relief. Then – accompanied by a heart-pounding score – the bad guy returns for one final shocker.

…or Glenn Close’s stalker character suddenly coming back to life after she’s been drowned in the tub in Fatal Attraction.

In the first six months of this year, investors went through a mauling.

So does that mean the bear has stopped slashing for good?

Or are these gains luring us back into the market for one final fight scene?

Bear markets don’t take stocks down in a straight line…

Take the Nasdaq after the dot-com crash.

A wave of speculation sent the tech-heavy index up 1,289% during the 1990s. This was largely due to the fervor over internet stocks toward the end of the decade. 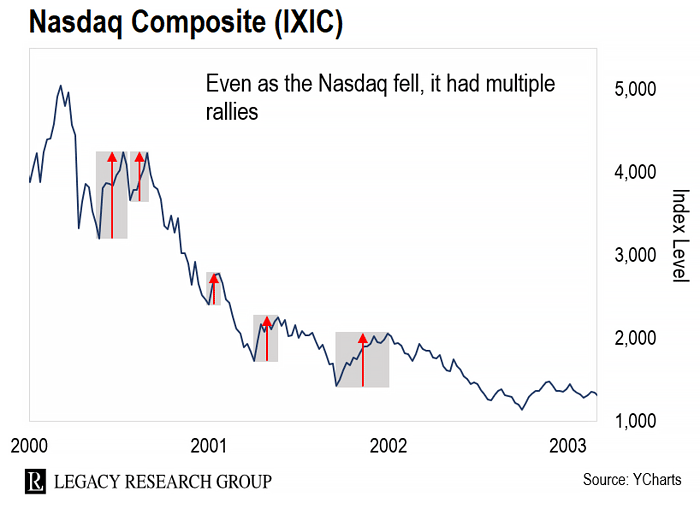 You’re looking at the Nasdaq from its bull market peak in March 2000 to its bear market low in September 2002.

Each time, it looked as though the bear market was dead… only for it to take stocks down even further.

That’s when toxic subprime debt caused a financial crisis that brought the global economy to its knees.

As the bear market played out, the S&P 500 plunged as much as 57% – its steepest fall since the Great Depression.

But over that time, there were plenty of reasons for hope. 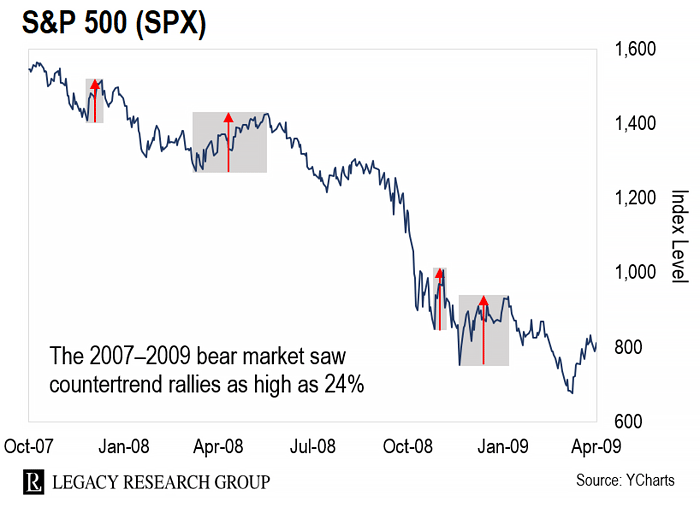 So how do you know when a bear market is well and truly dead?

The best answer to this question came from Sir John Templeton.

He was one of the world’s most successful fund managers. A $10,000 investment in his Templeton Growth Fund when he took over in 1954 would have been worth $2 million when he sold the fund in 1994.

And one of his insights was that bull markets are “born on pessimism, grown on skepticism, mature on optimism, and die on euphoria.”

So he looked for “maximum pessimism” before he got into stocks in a bear market.

It’s the point at which all the selling has been wrung from the market… stocks are beaten to a pulp… and the only way to go from there is up again.

Templeton put his money where his mouth is.

In 1939 – on the eve of World War II – he spotted a moment of maximum pessimism. And he bought $100 worth of every publicly traded stock selling for less than $1.

After an average holding period of four years, that portfolio would have returned 400%.

Teeka has been sharing a similar message with his readers…

If you don’t know him, he heads up our flagship Palm Beach Letter advisory.

And before coming on board at Legacy Research, he worked on Wall Street and ran his own hedge fund.

That gave him a ringside seat for the dot-com boom and bust… the 2008 global financial crisis… and every market shift over the past 30 years.

And despite the recent rally, he’s urging caution to folks who are thinking of plunging back into stocks. Teeka…

Everywhere I go people ask me, “Teeka, do we go all in?” And my 30 years’ experience in markets has taught me that nobody is asking, “Do we go all in?” when we’re close to the bottom. No one.

You know what they’re saying close to the bottom? They’re saying, “Oh, I can’t look at that. I feel like puking. Don’t even talk to me about that. I have no interest in stocks anymore.”

It’s great to see signs the market turmoil is easing… like the 17% rally in small-cap stocks.

But as I showed you, it’s normal to have rallies during bear markets. And often, they can be dangerous traps.

That is… unless you’re following on of the trading strategies we feature here at the Cut.

Buy-and-hold investors may hate bear markets. But traders can profit whether stocks rise or fall.

And often trades last only one or two weeks. This means traders can take advantage of the countertrend rallies that happen during bear markets.

That’s what Teeka has been doing over at his Alpha Edge trading advisory.

And he’s helped his readers achieve a string of gains.

On July 28, he closed out a 61% win on a recommended trade on Microsoft (MSFT) in just a week.

Last Monday, Teeka had a 45% return on a Colgate-Palmolive (CL) trade in less than a week in the model portfolio.

And earlier today, he sent out a sell alert for a trade on American Express (AXP).

Alpha Edge readers who acted on it made 53% in less than two weeks.

So if you’re an Alpha Edge reader who acted on Teeka’s recommendations, kudos. You’re proof it’s possible to make money in a bear market.

And if you’re not already a subscriber, and want to find out more joining Teeka for his next trades here.