Recent crypto market action feels like a punch in the gut.

Much of that drop happened early yesterday morning.

That’s when a steady drop in prices over the past five weeks became a near vertical drop. 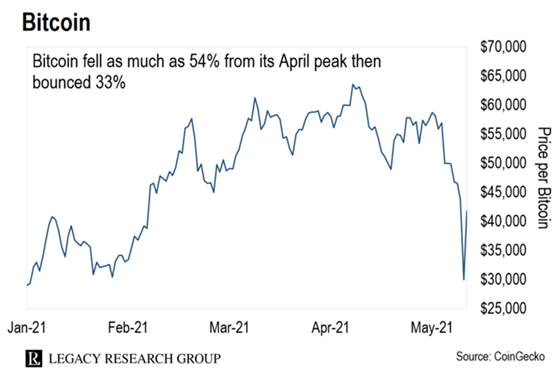 It’s a similar story for ether (ETH). It’s the crypto native to the “App Store” of crypto, Ethereum.

The recent sell-off has taken the crypto market cap (the value of all traded cryptos) down by 29%.

This has wiped $735 billion off the value of the crypto market… and no doubt caused crypto investors sleepless nights.

You may even be one of them…

But yesterday, I showed you why this is nothing to freak out about…

Most people don’t get it… But the gains you earn as an investor aren’t free.

Being willing to shoulder risk is the reason you can earn money.

The more risk you take on, the higher your potential gains.

Cash has no volatility. But it doesn’t throw off a return. Crypto has the highest volatility of these asset classes. So you can expect the highest returns for shouldering all that risk.

I can’t eliminate volatility from crypto. But if I had a magic wand and could… you wouldn’t want me to. Volatility is how you make 10x, 100x, and even 1,000x returns. It’s the price you pay for the chance to make life-changing money from tiny grubstakes.

So today, I (Chris Lowe) want you to tune out the short-term volatility… and tune in to the big picture.

Right now, one of the most important developments is a supply crunch Teeka has identified that’s about to hit the bitcoin market.

If he’s right, it could supercharge the bitcoin price… and send bitcoin-related plays soaring 50x or more.

This crunch is due to something Teeka calls the “Super Halving”…

Regular readers will be familiar with crypto halvings.

But if you’re just joining us, a halving is when the new supply of a crypto is cut in half at a preprogrammed date.

Halvings are worth knowing about. Because when you cut the supply of any asset and leave demand steady… or rising… prices go up.

Bitcoin has the best-known halvings. They’re preprogrammed to happen every roughly four years. And they’ve been money gushers…

Teeka’s subscribers who positioned themselves before the 2016 bitcoin halving saw the chance to make gains as high as 14,619% and 26,977%.

If you didn’t position yourself before those halvings, the bad news is you missed out on opportunities to really move the needle on your wealth.

The good news is there’s still time to get positioned for the upcoming “Super Halving”… which Teeka says will be bigger than all the other halvings combined.

Miners are starting to hoard the new bitcoins they earn…

Think of miners as the auditors of the bitcoin network. They provide the expensive computing power necessary to secure it. And they verify each transaction is the real deal.

Right now, miners collectively earn 900 new bitcoins a day. That’s about $36 million a day at the bitcoin price of $39,920 at writing.

They’re businesses. They have costs. To cover them and make a profit, they must sell some of the bitcoins they earn.

Many bitcoin miners are going public and listing their shares on an exchange. So they can now raise funds by selling shares or bonds.

That means they’re no longer forced to sell their bitcoins. They can sit on them instead and wait for higher prices ahead.

It’s a fundamental shift the mainstream press is missing…

Ever since bitcoin’s been around, it’s been plagued with negative associations with the illicit drugs market, pornography, and money laundering. That made it a taboo investment for the gatekeepers of traditional finance. So bitcoin miners haven’t had access to traditional sources of capital.

But as mainstream adoption has picked up pace, that’s changed. Now miners have less trouble raising cash. This year, crypto companies have already raised 10 times more capital than all of last year. So instead of selling all their bitcoins to fund their operations… miners can now hoard them.

And that’s going to change everything.

You can see what’s happening in this next chart… 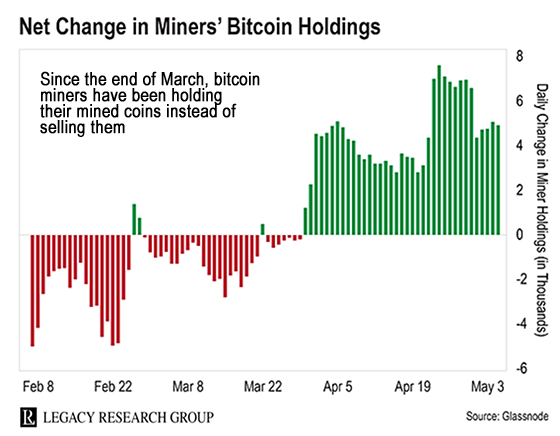 Since the end of March, the net change of miners’ bitcoin holdings has swung into what Teeka calls the “accumulation stage” (green bars on the chart).

Miners are holding thousands more coins daily instead of selling thousands (red bars) as they were earlier in the year.

He’s been recommending cryptos to his readers for five years. He knows this market goes through violent spasms from time to time.

This isn’t even the biggest drop he’s been through. In the Crypto Winter bear market in 2018, bitcoin plunged 84%. And smaller cryptos plunged even further.

So instead of panicking, he’s focused on how the Super Halving will be a catalyst for higher prices.

The trend is already in motion…

One recent example is a little-known U.S. company. It’s been mining bitcoin for years. And it has had to sell the bitcoins it mined to cover its operating costs because nobody would give it funding.

But recently, Fidelity (FNF) and Morgan Stanley (MS) invested $425 million into this project.

The miner no longer has to sell any bitcoins to cover its operating costs. That changes the game completely.

As Teeka has been spreading the word on… once miners can tap mainstream sources of capital, they’ll never sell their bitcoins again.

This next prediction may sound crazy…

But he reckons 2021 may be the last year anyone can ever buy newly mined bitcoin.

Miners would prefer to hold on to their bitcoin and sell at higher prices later than to offload now in return for sinking U.S. dollars… or British pounds… or Chinese yuan… or whatever.

As public companies, they’ll have to act in the best interest of their shareholders. So they’ll do what software maker MicroStrategy (MSTR), payment processor Square (SQ), and electric carmaker Tesla (TSLA) are doing and keep bitcoin on their balance sheets.

What happens to bitcoin when miners are hoarding it… companies are adding bucketloads of it to their treasuries… payment companies are buying nearly 100% of newly minted coins… and credit card companies are paying out $900 billion a year in bitcoin rewards?

Its price shoots through the roof.

More important, what does that do to the price of the small plays attached to bitcoin and bitcoin mining? My research says they could go up 50x or more.

In a special online event last week, Teeka released six small crypto-themed investments for the first time. He believes they will skyrocket as the Super Halving kicks in this year.

You can check out the free replay here.

The crypto is up 1,854% over the past four years. That’s the signal you want to pay attention to.

As Teeka explained in more detail here, he sees bitcoin shooting to $500,000 in the next five years as mainstream adoption continues.