The world’s first and most famous crypto is down 47% from the all-time high it set on April 14. 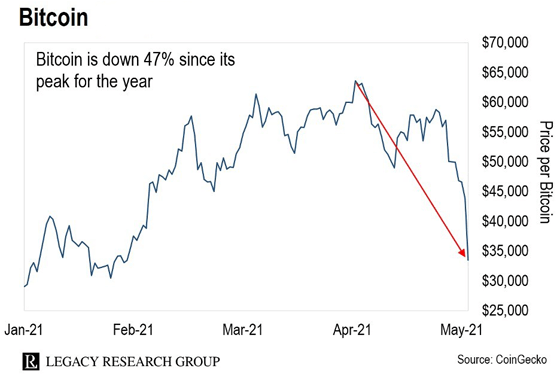 Much of this plunge comes after Elon Musk tweeted last week that Tesla (TSLA) had suspended bitcoin (BTC) as acceptable payment for its cars because it’s bad for the environment.

But whatever the catalyst… the selling has been brutal.

A bear market is a 20% or more plunge from a peak. Bitcoin has lost double that in one week.

So why is colleague and world-renowned crypto investing expert Teeka Tiwari calling this an “excellent buying opportunity”?

Some background on our mission for new readers…

The Daily Cut is the e-letter we created for all paid-up Legacy Research subscribers.

Our aim is to help you really move the needle on your wealth. And we do that by plugging you into the biggest ideas from Teeka, Jeff Brown, Nick Giambruno, Dave Forest, Bill Bonner, Doug Casey, and the rest of the team.

He came back convinced a surge in bitcoin was imminent. As I (Chris Lowe) wrote the next day…

If you’re a crypto enthusiast, you may have heard Teeka lay out his investment case already…

But if you’re part of the 92% of Americans who’ve never dabbled in cryptos, today’s dispatch will show you the size of the opportunity you’re missing.

You see, Teeka believes we’re about to see an explosion in the price of bitcoin, the world’s most valuable cryptocurrency, that will rival last year’s nearly 981% gain.

I even warned you about them in that same September 5, 2018, dispatch. Echoing Teeka’s repeated advice to his followers, I wrote…

Keep in mind that bitcoin is volatile. So don’t invest money you can’t afford to lose. It takes only a small stake to make a killing in the rally Teeka sees coming.

Just how volatile is bitcoin?

As you can see from the table below, it’s been a bucking bronco since it first started officially trading in 2010. 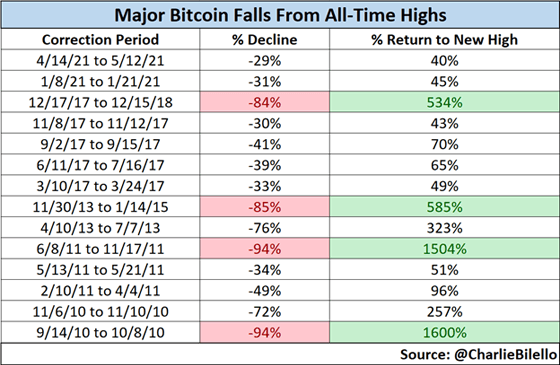 The table shows the 14 major price falls for bitcoin from all-time highs over that period.

You can see that volatility is the norm for bitcoin…

There have been six drops of 70% or more for bitcoin over the past decade.

And there have been two drops of more than 90%.

But ALL 14 of these major drops have been followed by blistering rallies to new highs.

I’ve said for years volatility is the price you have to be willing to pay for life-changing gains in crypto. You won’t see these huge up cycles without some huge down cycles, too.

It’s what stops most folks from making millions in bitcoin and other cryptos. They’re just not wired to make a lot of money from a volatile asset.

And they’re up 26,272% on his April 2016 recommendation to buy ether (ETH). It’s the crypto asset associated with what Teeka calls the “App Store” of crypto, Ethereum.

The lesson is clear: If you want to have a shot at making life-changing returns in bitcoin, you have to be able to stomach the volatility.

There’s some good news, though…

Bitcoin has grown up since those really big past drops…

As I’ve been showing you in these pages, Wall Street elites are getting involved in bitcoin.

This has helped push its market cap to $740 billion. That’s bigger than the combined market caps of Bank of America (BAC), Citibank (C), and Wells Fargo (WFC).

And Teeka says this means we’re unlikely to see the 80% and 90% drops we’ve seen in the past.

You see, as assets get more valuable, they tend to become less volatile.

The math is simple…

The same amount of cash is moving in or out. But it doesn’t shake things up as much.

Here’s what to do…

If you already own bitcoin, hold tight.

If you’re still building a position in bitcoin, the dip is a rare buying opportunity.

Take it from Teeka…

Friends, you don’t sell bitcoin into weakness. Let me repeat that: You DO NOT sell into weakness. That’s a no-no. That’s a sheep move. If you decide you want to trim some exposure (and I don’t recommend that), then you do it into strength.

The golden rule of bull markets is to sell into strength when you must and buy into weakness when you can. That’s the blueprint for how you get rich from a powerful trend. That is why I want you to view this pullback as a gift.

As Teeka has been showing his readers, there are only 100 million crypto users in the world today.

But about 5 billion people own a gateway to the crypto market: a mobile phone.

If bitcoin adoption just doubles, Teeka says we could see it head to $100,000. And he predicts we’ll see $500,000 bitcoin in the next five years as mass adoption steams ahead.

There’s one more reason to be bullish on bitcoin right now that I haven’t mentioned here today.

It’s got to do with what Teeka calls the “Super Halving.” More on that tomorrow…