Last week, the most powerful players in Silicon Valley booted President Trump, and groups supporting him, from their platforms.

Facebook (FB), Google (GOOG), Apple (AAPL), and Amazon (AMZN) – among others – shut down social media accounts… kicked apps off their app stores… and cut off essential hosting services to websites.

I’m not going to recite the long list of accounts and services they removed. You can read about that in the mainstream news.

Instead, I (Chris Lowe) want to shine the spotlight on how the centralized nature of these tech giants made this possible.

And I’ll show you how the technology behind the crypto revolution – aka blockchain – is helping us fight back against Big Tech’s censors.

Most folks know blockchain allows us to create decentralized currencies such as bitcoin.

As you’ll see, a new, decentralized, censorship-resistant internet is coming… along with potentially life-changing profits for folks who invest early in this megatrend.

Before we get to that, I want to welcome new readers…

If you’re reading The Daily Cut, it means you’ve signed up for one of the 18 subscriber-only investment advisories we publish here at Legacy Research.

My mission as your editor is to make sure you never miss a big idea from our analysts. So if you’re a fan of Teeka Tiwari, Jeff Brown, Dave Forest, Nick Giambruno, Jason Bodner, or our other experts… you’re in the right place.

I bring you their best ideas, in easy-to-digest form, every weekday.

And the buildout of the crypto economy… and the blockchain technology that powers it… is one of the most profitable ideas we’ve ever shared with our readers.

Just $1,000 in that last recommendation would be worth more than $176,000 today. If that’s not the perfect asymmetric bet, I don’t know what is.

For a currency to be worth anything, it has to inspire trust. If $35,000 bitcoin has proven anything, it’s that millions of people trust bitcoin.

And decentralization is key to creating that trust.

Because it’s decentralized, no person or entity can tamper with bitcoin or change any bitcoin transactions.

Also, no one can stop someone else from using bitcoin… or throw someone off the bitcoin platform. And you don’t have to ask anyone’s permission to own bitcoin.

This helps the estimated 20 million bitcoin users around the world trust bitcoin as a store of wealth and a medium of exchange.

And as Teeka has been spreading the word on for years, decentralization has profound implications that go beyond currencies.

As he explained it at our Palm Beach Daily e-letter in September 2016 – long before the mainstream started to pay attention to crypto – it also affects what kind of internet we have.

Remember, the internet is always evolving. And it’s about to get a blockchain upgrade. Teeka…

The blockchain is a revolutionary technology changing the world at an astonishing pace. It’s nothing more than a digital ledger. But this ledger is decentralized, public, and “unhackable.”

Decentralization is the source of the ledger’s integrity. Millions (and soon billions) of connected devices around the globe keep it accurate. Its reliability is so solid, some of the largest names in global finance and business are investing billions into the technology.

This is only going to become more important in the future.

Up to now, censorship resistance was something only the paranoid… or hardcore libertarians… cared about.

But in the wake of the recent Big Tech purge, it’s going to get a lot more attention. Nobody likes the idea of Mark Zuckerberg at Facebook and Jack Dorsey at Twitter deciding what information and ideas they can access.

The more centralized institutions highlight their power and control, the more the younger generation becomes intrigued by the idea of decentralization.

This trend is already making our readers money…

Since Teeka added it to the Palm Beach Confidential and Palm Beach Letter model portfolios in April 2016, it’s up 11,617%.

And ether is up 733% since the start of last year alone.

That’s nearly double the gains of bitcoin in 2020. 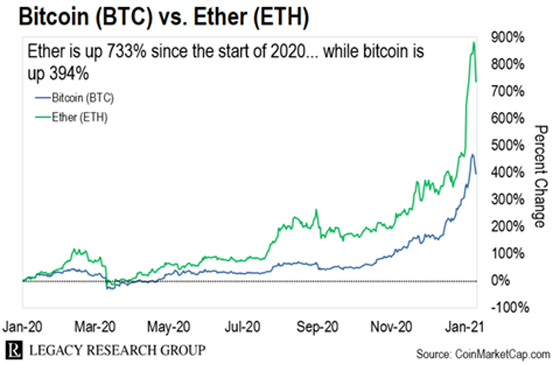 Without getting too deep in the weeds, Ethereum allows you to write software code that runs across a decentralized network of computers. And because it’s decentralized…

Think of it as an “operating system” for a new kind of censorship-resistant internet.

Microsoft Windows and Apple iOS allow you to build centralized apps on their centralized systems.

Ethereum allows you to build decentralized apps on the blockchain.

Also known as DApps (decentralized applications), these new types of apps are resistant to censorship, hacking, and intervention from a central authority.

Bitcoin was the world’s first DApp…

As regular readers know, centralized authorities don’t issue or control bitcoin. It’s out of the hands of governments, central banks, and commercial banks.

Instead, bitcoin is a peer-to-peer network.

Everyone is equally privileged on the network. Users interact with each other directly.

Ethereum takes the peer-to-peer idea to a new level. It allows us to program a wide range of other types of DApps.

One example is supercomputer DApp Golem…

It allows you to borrow unused computing power from other users on the network. It also allows you to harness the combined energy of a bunch of computers working together. So you can run complex calculations that would take forever using just your own computer.

You pay for using other folks’ computing power with the token associated with the Golem DApp. It’s called GNT (Golem Network Token).

Or take Augur. It’s a prediction market. You can use it to bet on future events and earn crypto in return.

And because it’s decentralized… it can’t restrict anyone from using the platform. There’s no CEO or founder who can shut down, modify, or restrict what you do.

It’s called EtherTweet. As the name suggests, it’s built on the Ethereum blockchain.

But unlike Twitter, content posted to it can’t be deleted (unless the content’s originator is the one doing the deleting).

No wealthy CEO is in control of what’s published. Nobody gets to dictate what information you can and cannot receive… or who on the network gets amplified or silenced.

So if you don’t like having Silicon Valley overlords control what you read (and therefore think), pay special attention to DApps and the world’s most popular DApp operating system – Ethereum.

In a video update he sent out last September to his Palm Beach Confidential subscribers (where the focus is entirely on crypto), he said ether was crazy cheap.

And he banged the table on why he believes Ethereum has the lowest risk and highest potential of any of the larger crypto projects he tracks.

But it’s not too late to profit. Here’s what Teeka told his paid-up readers last week…

I see the network soon being worth between $400 billion and $800 billion. That makes it about a 4x to 8x gain from today’s prices.

For a project that’s cutting out the middleman in finance – one of the largest sectors in the world at $20.5 trillion – I find ether’s price is undervalued. So we’re raising the buy-up-to price today.

Outside bitcoin, it’s one of the best ways to profit from the new, improved internet that’s coming.