Chris’ note: The U.S. stock market is in correction mode. The S&P 500 is down 12.2% from its peak. And safe havens gold and bonds are rallying. Folks in the mass media are running around with their hair on fire. The panic has reached such a fever pitch, shelves are running empty in stores around America.

It’s natural to be concerned at a time like this. But as I’ve been showing you, it’s important not to panic. That’s why, instead of our regular mailbag edition, I’m sharing with you an insight on where stocks are headed from Teeka Tiwari.

Teeka spent 15 years on Wall Street. Now, he heads up our Palm Beach Letter advisory. And this year, he’s on a mission to help mint more millionaires than any other newsletter writer in the country.

He says we’ll see a short-term leg lower in stocks. But it’s not the end of the bull market. As you’ll see below, Teeka believes the bull has another 10 years to run.

Now over to Teeka…

Next week, this bull market turns 132 months old. And I believe it’ll last at least another 120 months.

You may think that’s an outlandish prediction.

But consider: Back in 2014 – when the current bull market was just five years old – I said we were in the early stages of a massive run for the ages.

I had a lot of skeptics at the time. Yet since that initial controversial prediction, the market is up nearly 83%.

This time is no different…

Of course, the entire market is taking a beating over the worst outbreak in years: coronavirus.

During the past two weeks, the market has dropped about 10.9% on fears the virus is becoming a global pandemic. The past few weeks have been some of the worst for the markets since the 2008 financial crisis.

And it’s no surprise why. The headlines have been mostly negative…

The coronavirus has infected over 100,000 people around the world… and killed over 3,400 people.

More than 80,000 of the infected are in China alone – the epicenter of the virus.

Chinese officials fear the disease will become a pandemic without drastic prevention measures. It’s put large swaths of the world’s most populous country on lockdown.

So the human effects of this disease are very real… and I don’t want to minimize them. As investors, though, we have to look at the outbreak’s economic impact.

And right now, it’s rattling the U.S. markets – at least in the short term. The financial media, major investment firms, and plenty of investment newsletter editors are calling for a bear market. And they might be right… or completely wrong.

That’s why it’s important to know what type of market we’re in.

I want you to know we’re in a long-term (secular) bull market. Here’s what that means for you: We could drop 30% tomorrow, and the entire market would recover within 18 months – because we are in a secular bull market.

So don’t confuse what could be a temporary, sharp, panic-inducing drop with an end to the larger overall bull market. I want you to remember, in the last secular bull market of 1982-2000, we saw three drops of nearly 20% or more. And yet, within nine months, the market was back at new all-time highs each time.

It is urgent you understand the difference between being in a secular bull market and a secular bear market.

“Secular” markets are long-term, unidirectional moves. They typically last between 12 and 20 years. These trends can be bullish or bearish.

Stocks can move up, down, or sideways for extended periods. But they won’t go straight up or down.

Within each secular market, there are short-term moves in the opposite direction of the main trend. These are the “cyclical” markets, which tend to last nine to 18 months.

Take a look at the chart below, for instance… 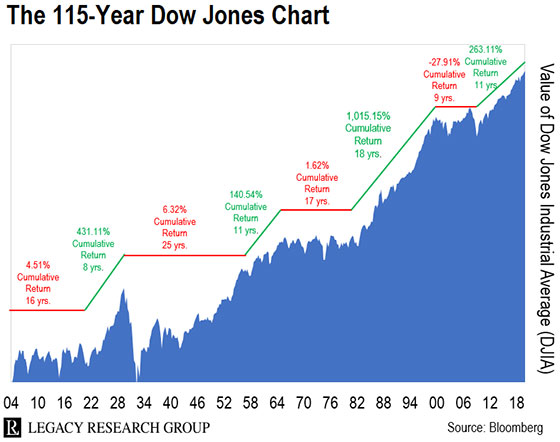 As you can see, secular markets have lasted for as long as a quarter-century.

Overall, the big-picture moves can be higher (the green sections) or sideways and lower (the red sections). But they’re still punctuated by smaller, cyclical moves up or down.

We saw that happen in the fall of 2018. From October to December of that year, stocks plummeted nearly 20% – which is considered a crash. But since then, the market has rallied 26% – despite the recent sell-off.

So that’s what’s happening right now. We’re simply in the midst of a short-term leg lower, while the big-picture trend is still headed much higher.

Of course, we’ll likely hit bumps along the way. It could be a war… a geopolitical event… or some other trigger, like this coronavirus outbreak.

But again, we still have at least 10 years left in this epic bull market to profit from equities. And you won’t want to miss out on the remainder of this phenomenal run.

So forget about trying to time the market. We all know that doesn’t work well for anyone. Instead, stay invested in stocks.

Chris’ note: In addition to staying invested in stocks for the long run, Teeka has been pounding the table on why now is the time to get exposure to the crypto market. That’s because he’s found five tiny, little-known cryptos he believes could turn $500 into $5 million.

That’s a bold claim. And Teeka expects you to be skeptical. That’s why he’s doing something nobody in our industry has done before. He’s chartering a private jet and flying to where some of these cryptos are based.

And he’ll be revealing all the details during his free presentation – from inside the jet – Wednesday, March 18 at 8 p.m. ET. You can learn how to sign up by going right here.