Chris’ note: An energy crisis is raging. Prices for everything from oil to natural gas and gasoline have spiked. It’s a troubling situation.

But to colleague Nomi Prins it also spells opportunity. Because it will also kick off one of the world’s most powerful market megatrends – the clean energy transition.

Before joining the Legacy Research team, she spent 15 years at the top echelons of the biggest players on Wall Street, including Goldman Sachs, Bear Stearns, and Chase Manhattan Bank.

And she learned that one of the best ways to achieve financial freedom is to follow the money. In other words, invest in a sector about to receive hundreds of billions – even trillions – of investment dollars. And wait for Wall Street to pile in.

Below, Nomi shows why the energy transition is a $150 trillion trend you need to tap into.

It’s been a wild ride for energy markets this year. And it’s just starting…

Energy prices are up 33% in the last year.

And energy – in the form of oil and gas – is one of the biggest costs for farmers. So rising energy prices are leading to higher food prices.

And it’s estimated now that these fertilizers feed roughly half the world’s population.

The higher natural gas prices go, the more it drives up fertilizer prices. This catapults food costs even higher.

These are two ways the energy crisis is hitting your wallet – beyond gas prices at the pump or the cost to power your home.

But there’s another reason you need to pay attention to the energy crisis right now.

Experts predict we could see an even bigger “energy shock” this winter.

I’ll get into that below. First, I want you to know you can protect yourself from this. You can even use the megatrend it kicks off to grow your wealth.

I’ll do a deep dive into this coming shock… and how you can prepare.

Plus, I’ll share details on a small, publicly traded stock that holds the key to solving a major part of the energy crisis.

You can reserve your spot for free here.

Now, I know not everyone feels the same way about the shift to renewables.

But no matter what your personal view, it’s bringing a once-in-a-lifetime opportunity to profit from an significant energy transition.

Governments have put a price tag of $150 trillion on their COP26 carbon reduction goals.

And this year, Russia’s war on Ukraine has catalyzed the push for renewable energy and related technologies.

Governments now see slashing their reliance on fossil fuels not only as important in the fight against climate disaster… but also a matter of national security.

And in April, the European Union (“EU”) followed suit. It proposed a ban on Russian coal imports. That ban went into full effect this month.

Then in June, the EU adopted a partial embargo on Russian oil. It banned overseas imports of Russian crude oil as of December 5. And it will ban petroleum product imports starting February 5, 2023.

That’s a big deal… Earlier this year, the EU accounted for 71% of Russian fossil fuel exports.

If the EU follows through with the sanctions, that will lead to fuel shortages and price hikes across the bloc.

That means the EU’s 27 member countries need to find alternative ways to power their economies… fast.

Russia supplies about 40% of Europe’s natural gas, most of it by pipeline.

And right now, the main pipeline, Nord Stream 1 is only at 20% of capacity. And just today, state-owned Russian gas giant Gazprom announced it will shut down the pipeline entirely for three days for maintenance.

This has sent prices up 386% over the past 12 months. And that’s a real problem in a place where 25% of all energy consumption comes from natural gas… and where 31% of households use it for heating and cooking.

So the race to ramp up production from renewable energy sources is on in the U.S. and across the pond…

The world’s governments have accepted manmade climate change is real.

I call that trend New Energy. It’s one of the five big-picture profit themes I follow for my readers.

Look at some of the recent numbers…

I’ve seen it time and again during my more than three decades working on Wall Street and as an investigative journalist… Where public money flows, private money follows.

And right now, governments are opening the money spigots for our New Energy theme.

The chart below from the U.S. Energy Information Administration (EIA). It tracks the growth in different energy sources through 2050. 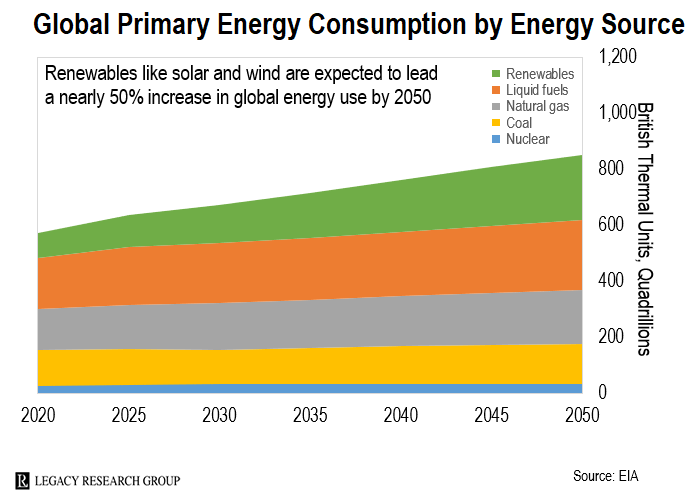 This chart shows the growth in renewable energy (green on the chart) as well as other energy sources.

As you can see, the EIA is projecting renewables to lead to a 50% increase in energy use by 2050. And we’re already seeing rising demand…

Last year was another record year for renewable energy.

The world added a record 295 gigawatts of new renewable power capacity in 2021. That’s enough to power over 221 million homes. And that was despite the pandemic and rising costs for raw materials globally.

Traditional energy isn’t going away anytime soon, But the major growth will be in the clean energy sources such as solar, wind, and nuclear.

I’ll take a deeper dive into it all tomorrow at 8 p.m. ET at my urgent strategy session.

Plus, I’ll share the details on that small, publicly traded company that’s key to helping us out of the crisis.

I’m calling this event the Running on Empty Summit. I’d love it if you could join me. You can reserve your spot – for free – here.

P.S. It’s not just American households feeling the pinch from the energy crisis. Some of the biggest companies in the world are suffering, too… including Amazon.

At my Running on Empty Summit, I’ll reveal the name of the small firm that could help Amazon cut its gasoline costs to zero. Plus, I’ll give you my recommendation on Amazon – whether it’s a buy, sell, or hold.

If you want to find out more, be sure to tune in. Click here to reserve your spot.