Chris’ note: At 8 p.m. ET, colleague Nomi Prins kicks off her Running on Empty Summit. She’ll be diving deep into the evolving energy crisis. And she’ll reveal how you can not only protect yourself, but also profit.

If you don’t know the situation in Europe, you may not realize how bad things are. I just got notice that my electricity bill for my home in Dublin, Ireland, is going up 45% at the start of next month. And that’s not the first price hike this year.

Energy price hikes are also hitting Americans’ wallets. If you’ve been to the gas station… or looked at your utility bills… you’ll know what I mean. And things are about to get a lot worse as Russia cuts natural gas exports to Europe… and winter approaches.

But it’s not all doom and gloom. As Nomi reveals below, there’s also a way to get on the right side of rising energy prices.

If you’re like most Americans, you’re worried about energy costs.

A Gallup poll earlier this summer revealed that gasoline price hikes are causing financial hardship for more than two-thirds of Americans.

And over the last 12 months, average energy prices in the U.S. have jumped by 33%.

Sure, recently we’ve seen some relief at the gas pumps. The national average price of gas has dropped from $5.01 in mid-June to $3.84 today.

But be warned… This is only the calm before another storm in energy prices.

Winter is coming. That means higher demand for energy. And when demand goes up, prices typically follow.

Today, I’ll show you how to position yourself for profits in a sector that’s been soaring during this crisis.

First, let’s look at one part of the energy market that hasn’t seen any relief this summer – your utility bills.

The average home electricity bill in the U.S. is up 15% versus this time last year. That’s the biggest jump since 2006.

As a result, one in six American households is behind in its utility bills.

Some utility companies have shut off power for roughly 40% more customers than they did pre-pandemic. One expert described it as a “tsunami of shutoffs.”

And one of the main factors pushing up electricity bills is the rising cost of natural gas.

You can see that growth in chart below. It shows the share of the U.S. electricity supply provided by each of the main fuel sources since 2005. 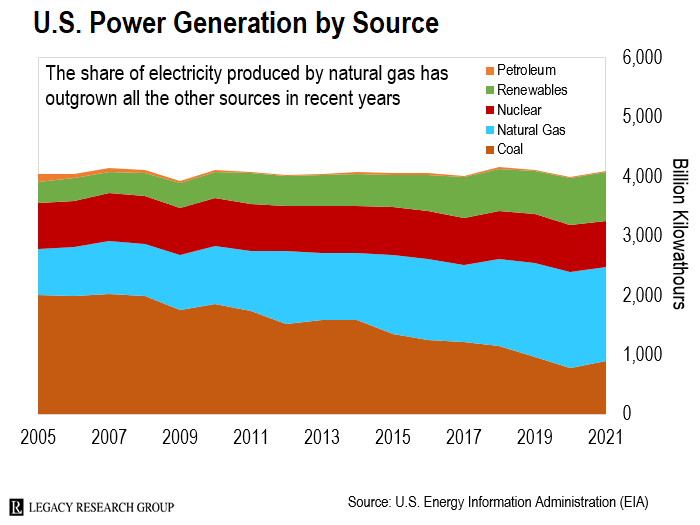 Over the past 12 months, U.S. natural gas prices are up 30%. And earlier this month, they hit a 14-year high. This was largely due to more air-conditioning use in this summer’s soaring temperatures. 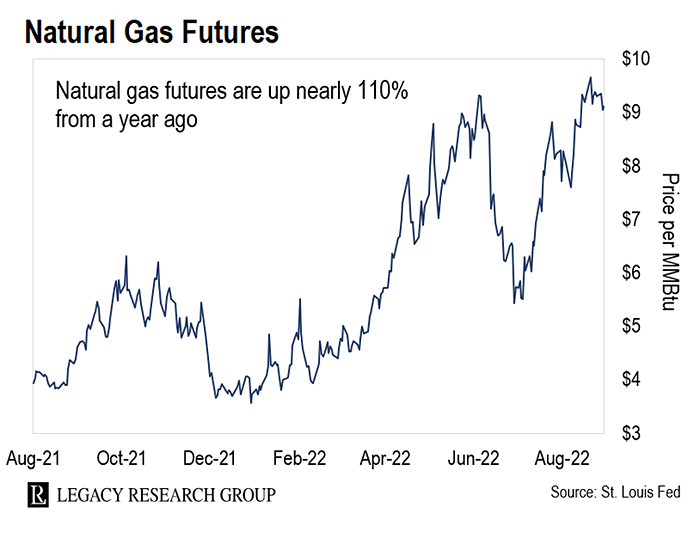 Over the past 12 months, futures prices for natural gas are up nearly 110%.

That means the price of this key power source has more than doubled in the last year.

The situation in Europe isn’t helping.

Russia is choking off the natural gas supply to the European Union (“EU”). It’s retaliating for EU bans on other Russian imports.

Russia pipes most of its gas exports to the EU. And its main pipeline is Nord Stream 1. It sends up to 170 million cubic meters of gas a day from gas fields in Russia to homes and power plants in Germany. And it accounted for more than half of Germany’s gas supply in 2021.

Since Russia attacked Ukraine, Gazprom – the Russian state-owned energy giant that controls Nord Stream 1 – has cut supply through the main pipeline to just 20% of capacity.

And today, the company said it was shutting off supply entirely. This follows Russia’s August 19 announcement that it would shut down Nord Stream 1 for three days – from August 31 to September 2 – citing “maintenance issues.”

But the announcement has raised fears Russia may completely cut off the Nord Stream 1 gas supply indefinitely.

This would be a catastrophe for Europe.

The EU gets about 30% of its power from burning natural gas. And it gets roughly 40% of its natural gas from Russia.

And natural gas prices there are up as much as 357% versus this time a year ago due to dwindling supply.

This rise in natural gas prices isn’t a blip. This winter, it’s destined to build into a crisis on the other side of the Atlantic.

And when rising demand meets falling supply, only one thing can happen… Prices go up.

Now, natural gas prices aren’t the same in the U.S. as they are in Europe. These are two separate markets.

But if prices spike in Europe… you can bet they’ll also spike in the U.S.

This problem gets worse when very cold winters follow very hot summers. And Europe has had one of its hottest summers on record.

This has caused folks to use more power for air conditioners. And that means burning more natural gas.

There’s less natural gas available for storage as a result… which leads to lower available gas for winter.

We have reduced supply due to the Russia-Ukraine war. That’s coupled with higher demand due to a hot summer. And colder weather is approaching.

That triple whammy is why we’ll see more natural gas price spikes as we head toward winter.

As I mentioned up top, it’s not all bad news…

Several types of companies will profit due to rising natural gas prices.

This includes natural gas exploration and extraction companies. It also includes companies that own or operate pipelines and other infrastructure to deliver natural gas.

And if I’m right, natural gas prices themselves will continue to rise through the winter.

You can position yourself to profit by way of the United States 12 Month Natural Gas Fund, LP (UNL). It’s an exchange-traded security that holds a portfolio of 12 natural gas futures contracts.

This allows it to track changes in the price of U.S. natural gas.

But this outperformance is just beginning.

Keep in mind that UNL isn’t a large fund. So treat this as a speculative trade. Keep your position size rational. And be prepared to take profits as UNL climbs.

Join Me Tonight at 8 p.m. for More

I’ll have more for you on this opportunity tonight at 8 p.m. ET, during my online event.

I’m calling it the Running on Empty Summit.

I’ll do a deeper dive into the crisis ahead. And I’ll show you how you can not only protect yourself… but also profit.

I’ll also share a list of five sectors that will go up… as well as five that will go down as the crisis reaches a head this winter.

It’s free to attend for all Legacy Research readers. So make sure to clear some time in your schedule for it. I look forward to seeing you there.

Here’s that link again to reserve your spot.