Folks either adore Tesla (TSLA)… and worship its founder as a genius.

Or they call him a fraud… and say his company is the world’s biggest Ponzi scheme.

Naturally, the mainstream press latches onto the controversy.

It’s why you read so much about the cryptic name he gave his daughter (X Æ A-12)… how he smoked cannabis on the Joe Rogan podcast… or the wacky tweets he posts from time to time.

Here at the Cut, we welcome the distraction. It means important developments happen at Tesla that pass most investors by.

We’re talking sales growth on the order of 2,729% over the next decade.

If you’ve been following along in the mainstream press, you might think this year’s Battery Day was a flop.

Reporters criticized Musk for not wowing them enough. They also noted Tesla shares took a dip following the announcement.

After the stock’s 437% run-up so far this year, investors sent Tesla shares skidding 10%. 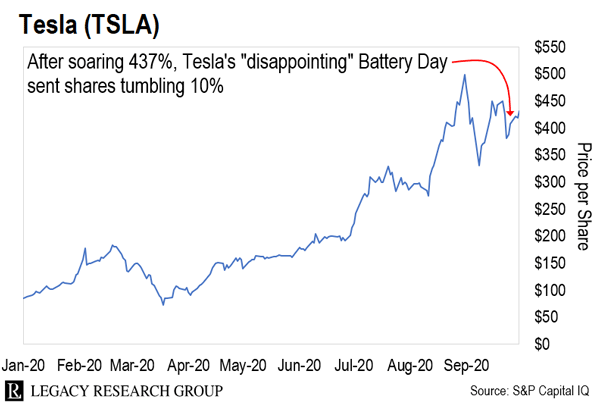 But if you believe Battery Day was a flop, you don’t understand the implications cheaper, more powerful batteries have on the company’s long-term growth trajectory.

As regular readers know, Jeff is our resident tech expert at Legacy Research.

He joined the team in 2015, after two decades working in the tech industry in Silicon Valley and Japan.

Since then, he’s been showing his readers how self-driving EVs are one of the most important tech trends of the next decade.

Tesla is in the best position to capitalize on this megatrend.

When we say a car is “self-driving,” that’s not actually true. The car isn’t driving itself. An advanced AI plugged into the digital feed from an array of sensors (cameras, radars, etc.) is.

As Jeff made clear in these pages at the start of last year, Tesla is better understood not as a car company… but as a software and AI company with an intimidating lead in self-driving AI.

That’s the source of its other main advantage over the competition. Here’s Jeff with more on that…

Batteries tend to make up more than half the cost of EVs. By 2023, Musk’s next-generation battery will allow Tesla to sell an EV for just $25,000. That will make it cheaper than the average gas-powered car.

What happens next is simple economics. Jeff again…

Teslas and other EVs are already cheaper to fuel… and much cheaper to maintain… than gas-powered cars. They also have far fewer moving parts. When you buy an EV, your days of oil changes and trips to the shop for repairs are over.

The only thing holding Tesla back from truly massive growth right now is its sticker price. Once that drops, in line with battery prices, Teslas will also be cheaper to buy than gas-powered cars. Then we’ll see Teslas on the road everywhere.

But to get there, Musk will need “tech metals”…

This is where two of the big themes we track for you – the rise of tech… and the boom in commodities – meet.

Even though they’re called lithium-ion batteries, lithium isn’t the only metal in them.

Now, we’re seeing the Fourth Shift. It’s a shift toward energy storage in the form of high-tech batteries. And tech metals are the fuel for that shift.

Dave has already given his readers the chance to make gains of 143% on tech-metal mining stocks.

Musk is going all in on these metals…

Tesla sought to extract lithium in Nevada in a joint venture with a company called Cypress Development Corp. But they didn’t reach a deal. Instead, Musk secured his own lithium mining rights in Nevada.

Musk will also launch his own battery-making operation. Jeff again…

Tesla has been working with Panasonic and Chinese battery producer CATL to make its batteries up to this point. That will continue. But current production is not enough to keep up with demand.

So Tesla will launch its own battery-manufacturing operation to keep up with rising demand. The company is going to build out enough production capacity so it can make 20 million cars a year by 2030. That would make Tesla the largest carmaker in the world.

We’ve been bullish on Tesla’s future here at the Cut since we launched this e-letter in 2018. And we continue to be. Our hunch is it becomes the Apple of the automotive world.

As we’ll get into in more detail tomorrow, we’re also bullish on the companies that dig tech metals out of the ground. The “Fourth Shift,” as Dave calls it, is set to send demand for them through the roof.

So stay tuned for more on that.