Why Tesla is toxic… The future of cars is now… How to benefit from the biggest energy shift since the 1960s… In the mailbag: Do we have any rights left?

On August 7, electric carmaker Tesla (TSLA) was under heavy selling pressure over the troubled rollout of its new Model 3. Shares were trading at about the $344 mark.

That’s when Elon Musk, Tesla’s founder and CEO, tweeted he’d secured private funding for the company at $420 a share.

Shares shot up over 10% to a new high for the year. But the funding never materialized.

So last Thursday, the U.S. Securities and Exchange Commission (SEC) sued Musk for trying to pump up the stock price.

In a settlement announced on Saturday, Musk agreed to step down as chairman and pay a fine of $20 million.

Tesla shares plunged 14% on Friday, the day after the SEC’s announcement, wiping out more than $7 billion in shareholder value. 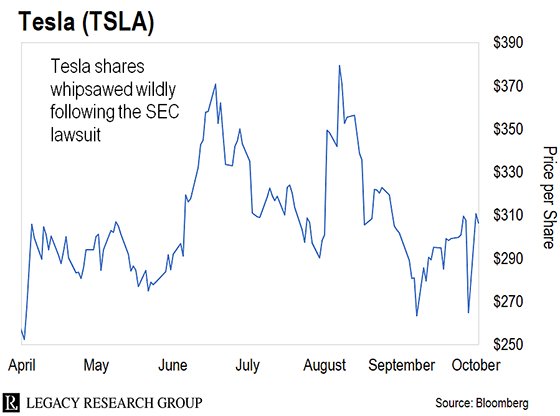 They recovered 17% after Musk agreed to let go of his board seat. But the stock is still down 18% from its high for the year.

Tesla is still too risky an investment right now…

Musk still runs the show as CEO. But that may be the least of investors’ worries.

As colleague Nick Rokke has been warning readers of our Palm Beach Daily e-letter (catch up in full here) Tesla could soon go belly-up. Nick…

Tesla may be facing bankruptcy. As hard as that is to believe for such a popular company, Tesla has serious cash problems.

Last quarter, the company’s free cash flow (FCF) – the money left after paying all the bills – was negative $740 million. And that was better than the first quarter, when the FCF was negative $1.05 billion.

At this pace, Tesla’s $2.2 billion cash reserve will evaporate next year.

At that point, if Tesla doesn’t manage to raise new funds, it will go bust.

But electric vehicles are still the future of transportation…

Whether Tesla goes bust or not, EVs are still our future. The world’s fleet of electric vehicles grew 54% to about 3.1 million last year. And according to the International Energy Agency, it’s going to hit 125 million by 2030 – a nearly 4,000% increase from today’s levels.

You see, all those new electric vehicles need batteries.

Just as the first automotive revolution couldn’t have happened without the combustion engine, the EV revolution can’t happen without rechargeable batteries.

The first major energy shift was when we went from burning wood to burning coal. This happened in the late 19th century. At the turn of the 20th century, we had another shift from burning coal to oil with the birth of the automobile. The third shift was toward widespread use of uranium as a source for nuclear power in the 1960s.

Now, we’re seeing the fourth shift. It’s toward energy storage in the form of high-tech batteries.

Even though they’re called lithium-ion batteries, lithium isn’t the only metal in them.

Only four countries on Earth produce lithium in significant quantities – Australia, Chile, Argentina, and China. Manganese also has a skinny list of sources, which includes murkier locales such as Gabon and South Africa.

The EV battery industry is projected to grow by about one-third each year for at least the next decade. What happens when limited supply meets wildly rising demand for metals from the EV battery space? The answer is rising prices for these key metals.

This is a game changer for the mining business…

Electric carmakers like Tesla aren’t the only ones trying to secure supply of these battery metals.

Earlier this year, it bought shares in Canadian lithium miner Nemaska Lithium through a private deal.

And SoftBank isn’t the only tech player taking an interest in these metals. Apple and Panasonic – among other battery makers and users – are also hunting for mining investments.

That level of interest is something you want to keep an eye on. Here’s more from Dave…

When big, mainstream investors are suddenly getting excited about a small corner of the commodities world like this, it can drive huge gains in metals and the associated stocks. It happened with uranium in 2005 and 2006, when hedge funds started buying – and drove metals prices from $20 per pound to $140.

Dave has focused on specific miners at International Speculator…

These are the companies he believes are poised for the most explosive growth.

But if you’re not yet a paid-up International Speculator subscriber, don’t worry.

One alternative Dave has drawn readers’ attention to is the Global X Lithium & Battery Tech ETF (LIT). It invests in a range of lithium mining, lithium refining, and battery production companies.

But as we’ll show you later this week, battery metals aren’t the only way to profit from the explosion in demand for electric vehicles. Stay tuned for more…

Meantime, in the mailbag: Do we have any rights left?

Turning back to one of our main themes at The Daily Cut, readers wonder whether we’ve lost our privacy… and our rights along with it…

If I look back in my data bank at when I think all this “identity thievery” started, I would have to say after 9/11, when collecting information on our population was made a national security issue.

Obama took it to another level from control to developing his own police force or “Police State.” Today, the NSA [National Security Agency] has contracts with AT&T, Google, Facebook, Verizon and several others to get access to information on “us.” The entire population would know if any of us were bedwetters or sucked our thumbs. It is a national disgrace to this country’s Constitution, its laws, and its intent.

I have concluded that the only rights we really have are those that we can enforce for ourselves or convince others to enforce for us. For example, I have a right to think what I want if I keep my mouth shut, but if I speak up, there may be consequences.

The Constitution was written to prohibit the government from interfering with anything not specifically authorized by the Constitution, but that is totally gone. And the sad part is that the vast majority of Americans seem to be OK with that, to at least a modest degree, and clearly a majority with nearly all of it.

As we can no longer count on our elected or appointed officials to defend our rights, each of us must do what we can or are willing to do to manage. The trends seem downhill, and I can’t imagine a positive trend forming until or unless the current ones really crash.

Are you betting on the electric vehicle revolution? Or do you have your eye on a different area of the commodities market? Write us at [email protected].