Iran’s answer to Trump’s sanctions… This could be the worst oil shock since the 1970s… How crude oil prices quadruple from here… In the mailbag: “I hate Facebook”…

Oil prices are on the rise…

That may sound odd given that, as we showed you yesterday, battery-powered cars are spurring a new energy revolution.

But the fossil fuel still has a key role to play in the global economy before it fades into the background.

U.S. crude oil hit a new high for the year on Monday. 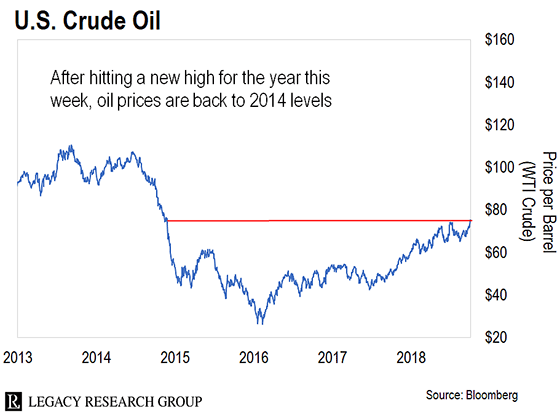 This has taken oil prices back to levels not seen since November 2014.

That should be good news for Iran…

But the market for Iranian oil is about to vanish.

After tearing up the Iran nuclear deal put in place in 2015, Team Trump has demanded that all countries stop buying oil from Iran by November 4 or get hit with U.S. sanctions themselves.

Don’t expect Iran to give in without a fight…

You may think oil cuts… or a secret nuke… are Iran’s best weapons in a fight with the U.S.

But it holds an even more powerful strategic card.

Take a look at the map below… 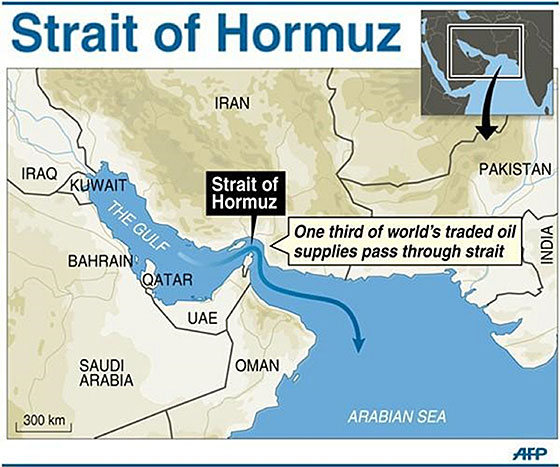 Iran can close the Strait of Hormuz, the strategic strip of water that connects the Persian Gulf to the Arabian Sea.

Nick Giambruno has been tracking what’s going on with Iran for readers of The Casey Report. And as he’s been warning, if Iran closes down the Strait, it would roil energy markets. Nick…

Five of the world’s top 10 oil producing countries – Saudi Arabia, Iran, Iraq, United Arab Emirates, and Kuwait – border the Persian Gulf. The Strait of Hormuz is their only sea route to the open ocean… and world markets.

Oil tankers moving oil from the OPEC oil cartel’s top five exporters all have to pass through the Strait. That’s about 33% of the world’s oil traded by sea.

In short, the Strait of Hormuz is the most crucial energy chokepoint in the world.

Iran knows this. And top-level officials there have already threatened to close it if Trump doesn’t back down.

Team Trump picked its November 4 deadline for a reason…

It’s the date, in 1979, that Islamic revolutionaries seized 52 Americans in Tehran, kicking off a two-year hostage crisis.

Using this date as a deadline is an intentional snub to Iran’s leaders. And it’s brought the situation to a boiling point…

We will make the enemy understand that either all can use the Strait of Hormuz or no one.

Iran has the military strength to pull this off…

It has a smaller military than the U.S. But Iran has decades of experience deploying sabotage tactics against superior enemies. Nick again…

The Strait of Hormuz is a shallow, cramped body of water. It’s full of commercial and military vessels. It’s the perfect environment for Iran to outmaneuver the U.S.

Iran could sabotage the area using sea mines, which are extremely cumbersome and deadly to remove. Iran has advanced anti-ship ballistic missiles that could sink U.S. vessels from onshore, too. It also has miniature submarines that are hard to detect… and an assortment of other unconventional tools and tactics.

Nearly 19 million barrels of oil travel through the Strait of Hormuz every day. That’s about one-fifth of the global market.

Cutting that supply all at once would send prices skyrocketing. Nick again…

I would expect the effect on the oil price to be at least as severe as the first oil shock in the 1970s. Back then, oil prices quadrupled. In today’s prices, that would mean oil shooting above $250 a barrel.

A near-term speculation on oil makes sense to take advantage of this setup. If Nick is right, we could see an explosive move higher before the year is over.

But no matter how this plays out over the near term… the long-term future for oil is a different matter.

As we showed you yesterday, the global auto industry is moving away from combustion engine vehicles. More on how to profit from that historic energy shift in tomorrow’s Daily Cut.

On Monday, we asked you if you’d use a blockchain-based social media platform like Steemit in lieu of Facebook. These are just some of your answers…

I would definitely use Steemit as my new Facebook. I started a Facebook account when I first got my computer in the early ’90s. Since then, I have deleted everything and have not posted for approximately 11 or 12 years.

I hate that everyone can see what you’re doing. I am more of a private person, but I would like to communicate sometimes with my other friends who are also private people. Looks like a good deal to me.

I hate Facebook. I only use it to see what my children are doing or saying. I am always shocked at what people put on Facebook. Do they think it is their best friend? Do they not have any friends to share their worries, joys, or fears with? Are we on the brink of being unable to communicate verbally with each other?

I’m in favor of your idea. I just want to see people talk to each other, not stare at their phones, and expose themselves to a world run by global elites. This is the end game, in my opinion, of what Facebook, Google, Twitter, and all the rest are about. Keep going after them.

I have resisted using Facebook and Twitter and only use email and texting when I need to. However, I know that I am still being mined by what I look at to purchase online. It seems the “algorithm gurus” are at work immediately as a pop up of alternative choices for what I am looking at will show up almost immediately. So I will take Big T’s advice. Might as well get paid for it. Another digital stream of income.

A great idea. I have never used Facebook. I use Google Chrome but only because I started a long time ago before they got so big and intrusive. If there were a reliable, honest alternative such as you describe I would switch so fast it would make Google’s head swim… I would actually pay THEM.

I delisted my Facebook this year and haven’t used it in three years. Waste of time and energy – and filled with crazy cyber bullies to boot!

Given a choice between having your data shared or not, or the option to get paid for it is clear. But Facebook took the world by storm because our millennial generation adopted the technology.

If Steemit or another technology can offer the “kids” a hip, exciting way to do XYZ, and sell the notion that they can earn real money by allowing the company to use their data, it may work.

Kids that matter don’t use Facebook anymore. They use other tools such as Pinterest, Snapchat, etc. When they have options that are nearly as good as a mainstream option and that would earn them money from the usage of their data, then you will get the right audience and the rest of us will follow.

Are you getting ready for higher oil prices? Let us know how it’s going at [email protected].