There are no electric vehicles without “tech metals”…

Yesterday, I (Chris Lowe) showed you how Elon Musk’s Tesla (TSLA) becomes the world’s biggest automaker in a decade from now.

Already, Tesla is the world’s most valuable automaker by market cap – the sum value of its outstanding shares.

According to its market cap, Tesla is worth $411 billion. That compares with a market cap of $185 billion for Toyota (TM), $89 billion for Volkswagen (VLKAF), and $41 billion for Honda (HMC).

But what most folks don’t grasp yet is Tesla is also on the way to becoming the world’s No. 1 carmaker by number of annual vehicle sales.

Last year, 367,500 Teslas rolled off Musk’s production lines. And as our tech expert, Jeff Brown, has been showing his readers, by 2030, Tesla will have the capacity to make 20 million cars a year.

As we covered yesterday, the driving force behind this growth will be the cheaper, more powerful batteries Musk announced at Tesla’s “Battery Day” last week.

You can buy Tesla shares to profit from this setup… 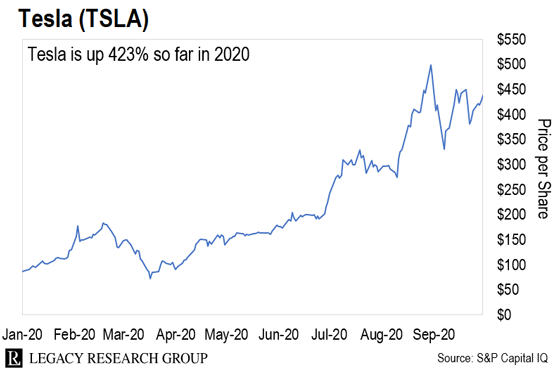 That makes it the second-best-performing stock on the tech-heavy Nasdaq-100.

But as you’ll see today, there’s also a “backdoor” way to play the EV boom…

It’s already been making Legacy Research readers money. And it means you don’t have to try to pick stocks of winning EV makers.

That backdoor is what our commodities investing expert Dave Forest calls tech metals.

These include lithium, nickel, cobalt, manganese, aluminum, iron, and phosphate. They’re key components of the rechargeable batteries that power every Tesla on the road.

And as demand for these batteries grows, it will spark demand for the metals that go into them… and a boom in profits for companies that mine those metals.

Take one of the lithium miners Dave recommended to his readers, Lithium Americas (LAC).

It’s shot up 161% since he added it to the Strategic Investor model portfolio in June 2020. (Note: It’s now well above the buy-up-to price, so it’s not an open recommendation.)

For perspective, the average yearly gain over the past 20 years for U.S. stock market bellwether the S&P 500 has been just 6.4%.

This story is about a lot more than just Tesla…

By 2035, nearly half of all new vehicles sold will run on battery power. 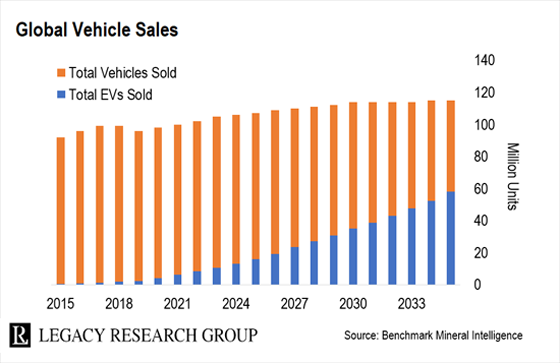 That’s a big deal. If California were a country, it would be the world’s 10th-largest car market.

Over in Europe, increases in government subsidies for EVs in the bloc’s June stimulus package has led to a rush of EV sales.

The first is lithium. It’s the soft, silvery-white metal that’s No. 3 on the periodic table.

Lithium is used in everything from ceramics and glass-making… to nuclear fusion… to treating mental illness. But the increasing demand for EVs is supercharging the demand for this metal.

The World Bank projects demand for lithium will surge 956% by 2050, sparked by the EV megatrend.

This surging demand will create a lithium deficit. Here’s Dave with more…

For years, there’s been more than enough lithium in the world to meet demand. But starting in 2020, rising demand from EVs is expected to suck up nearly every pound of lithium we have on the planet.

Over the next few years, there simply won’t be enough lithium to supply the EV industry, plus all the other businesses that depend on lithium.

Dave and his team have crunched the numbers. And they’re startling. Dave again…

You won’t have to refill the lithium in your car like you refill gas. But if EVs make up half of all car sales, that’s about 58 million EVs on the road in 15 years. And each EV will need about 59 kilograms of LCE.

That works out to 3.4 million tonnes of LCE – seven times more than the entire world produces today.

When demand overwhelms supply like that, you get a major price spike.

As Dave has been hammering on, that’s one of the reasons investors make such huge fortunes in commodities. When something fundamental changes in an industry – like the surge in demand for tech metals – the resulting shortage can trigger sudden and massive surges.

The other tech metal Dave has his eye on is nickel…

Nickel is another silvery-white metal that goes into the rechargeable batteries EVs run on.

And Dave believes it may end up being the biggest winner from the EV revolution.

Nickel makes up more than 70% of the metal content of some of the most advanced EV batteries on the market today.

As you can see from the chart below, it’s been in a deficit for the past four years. Demand has outstripped supply.

Thanks to the coronavirus pandemic, it’s in a surplus this year. But the surging demand for nickel in EV batteries is set to bring back the deficit… and exacerbate it. 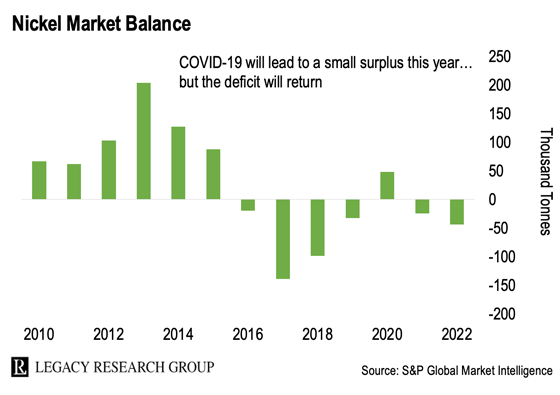 That’s why Elon Musk says he’ll buy all the nickel he can from responsible mining companies. Once again, supply can’t keep up with demand.

How do you play the tech metals trend?

The best option is to follow along with the tech-metal miner recommendations Dave shares with paid-up readers of our Strategic Investor and International Speculator advisories.

As regular readers will know, Dave is a trained geologist. Over more than two decades, he’s explored countries on all of the world’s populated continents, hunting for deposits of copper, gold, nickel, cobalt, and natural gas.

He helped develop the sixth-largest platinum-producing district in the world. He discovered more than 1 billion pounds of copper in Asia and South America. And he was the first natural-resource explorer the government of Myanmar (formerly Burma) licensed.

He’s also given his paid-up readers the the chance to make outsized gains on tech-metal mining stocks.

The second-best option to gain exposure to this trend is through the Global X Lithium & Battery Tech ETF (LIT).

It’s a convenient, one-stop shopping tool that holds a number of lithium miners and battery producers.

It won’t give you the same potential for returns as the stocks Dave recommends. And it’s not going to give you exposure to nickel miners. But as lithium demand grows and supply runs short, it’s a great speculation right now.

Just remember, don’t bet the farm on speculations like this. And never risk more than you can afford to lose.