Yes, Alexa has been recording you… How Amazon’s employees access your deepest secrets… In the mailbag: Should you copyright your face?…

If you own an Amazon Echo “smart speaker,” your home is being bugged.

That’s the latest revelation about the encroaching Surveillance Society we’ve been warning you about.

The Echo allows you to connect to Amazon’s virtual assistant, Alexa.

The idea is to bring even more digital ease into your life. But it’s bringing a lot more than that…

You see, Amazon has been storing everything your Echo records after Alexa hears someone in your home speak its name or “wake word.”

As we’ll show you in today’s dispatch, we’re talking thousands of recordings for the typical Echo owner.

This is not some innocent mistake. Just like at Google and Facebook, the folks at Amazon believe they have the right to record your most private conversations – and listen to them – without your consent.

Most Americans accepted long ago that there’s no such thing as privacy around their digital devices. And they’re happy to trade a private life for the “free” services they get in return – email, maps, social networking, a voice-activated virtual assistant, etc.

But if this kind of thing bothers you, we put together a 20-page guide you can use to take back your privacy today. (Look out for that at the end of today’s dispatch.)

One of its core skills is learning to understand human speech. And Amazon says it needs to record you in your home to help Alexa with its studies.

In other words, Amazon uses data it collects in your home to improve Alexa’s voice recognition. And this is more important to the company’s higher-ups than your privacy.

Here’s the thing… It’s not just other AIs listening to the private conversations your Echo is recording in your home. Amazon staff regularly eavesdrop on these recordings, too. As Bloomberg reported…

Amazon employs thousands of people around the world to help improve the Alexa digital assistant powering its line of Echo speakers. The team listens to voice recordings captured in Echo owners’ homes and offices.

The recordings are transcribed, annotated and then fed back into the software as part of an effort to eliminate gaps in Alexa’s understanding of human speech and help it better respond to commands.

Just like other mass surveillance devices, the Echo records you by default. This has become so normal, Amazon doesn’t think it needs to give you the option to opt out of these recordings…

…or even tell you they’re happening in the first place.

Alexa records you even when you don’t say its name…

Alexa has been shown to also start recording if you say something that sounds like the word “Alexa.” That could be anything… even background chatter on your TV or radio.

It also starts recording at prompts from other devices around your home.

Don’t say we didn’t warn you…

We’ve been pounding the table here at the Cut on the threat to your freedom the Surveillance Society poses.

We’re talking about a society in which powerful new surveillance technologies track, monitor, and record you both online and offline.

This was also one of the big themes at our first annual Legacy Investment Summit in Bermuda last October.

One of the highlights of the event for me (Chris) was leading a panel discussion on stage with Legacy Research cofounders Bill Bonner and Doug Casey… as well as Bonner-Denning Letter coauthor Dan Denning… crypto expert Teeka Tiwari… master trader Jeff Clark… and our in-house tech expert, Jeff Brown.

We called the panel discussion “The Technology of Tyranny.”

And we discussed how for-profit surveillance companies like Facebook and Google have weaponized technology through the use of censorship. As Dan put it…

What you’re seeing is a concerted and final push that’s an attack on the liberties in the Bill of Rights. It attacks privacy, speech and, more importantly, your freedom of action.

We just unlocked the panel for Daily Cut readers. If you have an hour to spare, I encourage you to check it out.

And don’t underrate the power of today’s surveillance tech…

For instance, the Echo is doing its eavesdropping in the most private space you have – your home. And it’s powered by some of the most sophisticated AI on the planet.

AIs may learn like humans. But they’re still machines. They’re capable of watching, listening, monitoring, and recording you round the clock, 365 days a year. They never get tired. They never skip a beat.

And with its almost infinite amount of “cloud” data storage (the company also owns and operates the world’s largest data center business) Amazon has no limits on the amount of private data it can scoop and store.

Amazon, Google, and Facebook sell “smart cameras” for your home, too…

And using face recognition, these devices will soon be able to figure out not only what you’re saying but how you’re feeling.

Face-recognition software can already detect a range of human emotions from your facial expressions – including anger, surprise, and fear.

They’ll even soon be able to tell if you’re lying to them… or trying to cover something up… from the signs of stress they pick up in your facial expressions.

If you’re still not worried, here’s more from Bill on why you should be…

The big data collection by Amazon, Google, and Facebook boggles the mind. It’s the kind of surveillance apparatus the secret police of the Great Sun King, Louis XIV… or of the Soviet Union… or of the Third Reich couldn’t have even dreamed of.

These companies keep track of you. They know everything about you – all your spending habits, everything you need, everything you want, everything. Every website you visit and every comment that you make to anybody is now out there.

And with their massive “cloud computing” data centers, they’re able to put this all together to make a portrait of you. This could be used for all kinds of things.

As regular readers know, Doug is Bill’s fellow cofounder at Legacy Research. And as he explained it in these pages last December… bringing surveillance devices into your home is a big mistake.

The problem – and what amazes me – is that people are putting these devices in their homes. Alexa, Siri [Apple’s AI assistant] and their friends, are designed to pick up information from you and about you. That data stays in the cloud forever.

It’s like inviting Dracula into your house. Trusting the goodwill of some corporation is utterly and completely foolish. We’re nothing more than digits to them.

We’re not trying to scare you…

But we don’t want to sleepwalk into a Surveillance Society, either.

Luckily, you can take some steps to start the fight back.

For instance… If you own an Echo, and you want to find out what snippets of private conversations Amazon has stored on its servers, you can listen here.

You can also delete any sensitive conversations Amazon has uploaded to its servers.

But be warned… this can be a slog. If you’ve had an Echo for even just a few months, Amazon will potentially have thousands of recordings on you. And you have to manually delete them, one by one.

Keep in mind also that you can’t opt out of fresh recordings. So if you own an Echo, it may be listening to your private conversations, even when you haven’t intentionally used its wake word.

So best to keep sensitive conversations out of its recording range (about 20-25 feet, based on reviews from Echo users).

And even if you don’t own an Echo, there are likely dozens of devices around your home – not just your smartphone and laptop – that are capable of spying on you.

Fortunately, there are other steps you can start taking today to shore up your privacy.

It’s a 20-page guide we put together. And it shows…

As a Daily Cut reader, you can access it for free right here.

In the mailbag: Should you copyright your face?…

Recently, we showed you how the feds are rolling out face-recognition technology at 17 airports across the U.S. And it got your fellow readers thinking…

I believe that your face and my face are works of art that need to be copyrighted. Take a picture and register it. Then we can sue the surveillance corporations working with the government for infringing upon our copyright. Maybe that will slow them down.

Is there a brilliant lawyer out there who can figure out if this will work? While you are at it, copyright your fingerprints so those cannot be used, either. Then, patent your DNA so that cannot be used.

It seems like we have lost ownership of ourselves and our bodies. Are we really completely owned from head to toe by the government now?

I suggest that you watch the film Snowden – at least twice. However you may feel about his whistle-blowing, it gives a comprehensive (and frightening) picture of what has been going on not only in the U.S., but across the globe, not only in terms of spying, but in the level of control the U.S. has over systems in foreign nations. We have our fingers in almost all the pies.

Meantime, a reader over at our Diary e-letter is taking a break from politics and the economy – courtesy of Legacy Research cofounder Bill Bonner and his recent essay, “The Tragic Story of the House on the Hill”…

Dear Bill, I loved the story of the castle, the abbey, and the cottage. The Irish have a way about them in storytelling. Anyway, it is a nice break from the gloom and doom of the economy, politics, and Trump. In fact, I have decided to simply avoid most of the claptrap being disseminated by both sides, red and blue.

I am tired of the vitriol and hate and lies. Of course, that will not make them go away. It is sort of like the child who covers its ears and sings very loud to avoid hearing something it detests. I wish to go about my life without being subjected to constant propaganda and lies.

I love this life and no bunch of lying apparatchiks can make me feel terrible about my life. I live in Hawaii. Pretty close to being paradise. But I suppose people even in paradise have gripes.

If you own a smart speaker like Echo, have you had any creepy experiences? Are you worried about losing ownership of yourself to the government, like Marvin W.?

Circle May 22 on Your Calendar

Master trader Jeff Clark made 10 times his money on the Friday afternoon before Black Monday. He predicted the 2008 crisis… eight months before it happened.

Now, he says another crash is imminent. And on May 22, he will reveal the exact day he thinks it could happen – and how you can turn it in your favor.

Portfolios could be obliterated… or fortunes could be made. And 99% of Americans won’t see it coming. Will you? 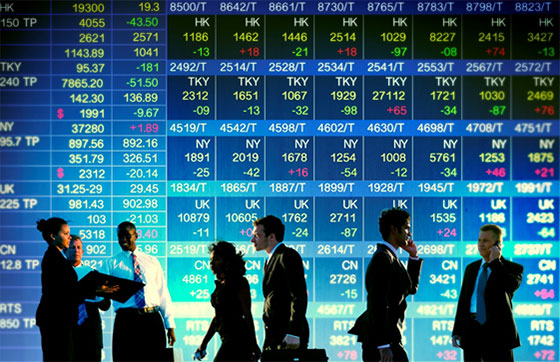