Chris’ note: Tomorrow, as promised, we’ll be circling back to cryptos ahead of Teeka Tiwari’s live web event this Wednesday. As you can read more about here, he’ll be revealing details on the five coins with the potential to turn $500 into $5 million.

But today, an important update on a story we first put on your radar back in July… an oil shock out of the Middle East that could send prices soaring.

Over the weekend, drone attacks on Saudi Arabian oil facilities knocked out half the country’s oil supply. This sent crude oil prices spiking as much as 20%. That’s the biggest move since the invasion of Kuwait in 1990.

The attacks have Iran’s fingerprints all over them. And although it’s caught most folks in the mainstream press flat-footed, our crisis investing expert Nick Giambruno saw it coming… as did his readers.

In August 2018, he warned readers of our Casey Report advisory that tensions in the Middle East would send oil prices soaring. And he urged readers to load up on oil stocks to profit.

As you’ll see below, things are playing out just like Nick predicted a year ago. But the biggest gains could be still to come…

The U.S. and Iran are not in a hot war. But they’re not at peace, either. The U.S. policy of “maximum pressure” against Iran uses sanctions and other methods with one main aim – to squeeze Iran’s oil exports to zero.

Chris: Iran’s military has reach beyond the Strait of Hormuz. It has the biggest battery of ballistic missiles in the region. And as you’ve been telling your readers, those missiles could rain fire inside the oil fields of Saudi Arabia.

Nick: Yes, the Strait of Hormuz is just one piece of the puzzle as tensions rise between Iran and its rivals. As we saw over the weekend, Saudi oil infrastructure is another vulnerable target. Saudi Arabia is the world’s largest exporter of petroleum. It’s also home to about one-fifth of the world’s proven oil reserves.

Chris: Where do you see this headed? Are we headed for a conflict in the Middle East?

Nick: Outside parties are pushing President Trump in the direction of increasing hostilities. Saudi Arabia and Israel are not shy about saying they want war with Iran. They both have enormous influence over the U.S. government.

Even if Trump doesn’t want it, other nations can cause mischief to increase tensions. The risk is it goes over the line. After the Iranians shot down a U.S. drone back in June, the U.S. Navy was within minutes of attacking key Iranian military installations with ballistic missiles.

And don’t forget Iran has allies, militias, and armed forces all over the Middle East. And it has all sorts of special forces around the world.

One thing I want to stress is that most Middle Eastern countries are artificial. Their borders were drawn up after World War I. Most of them don’t have a long history or a cohesive identity – other than what colonial powers imposed on them over the past 100 years.

Iran is a notable exception. It’s not a fake country. Iran is Persia. Persia has been around for thousands of years. It has an ancient culture and civilization. The U.S. is not messing with some backward Bedouin tribes here. This is completely different.

And it could get really, really nasty.

Chris: President Trump clearly has a beef with Iran. He tore up the nuclear deal President Obama signed with the Iranians. And he’s hit Iran with new sanctions… and targeted its oil exports.

But Trump doesn’t seem to have a clear endgame. He can’t attack Iran without sending oil prices to the moon. But he wants to keep putting pressure on Iran by way of sanctions. The problem with that strategy is Iran has never buckled under sanctions before.

Nick: Iran has been under sanctions since the Islamic Revolution in 1979. They haven’t worked. Sanctions aren’t going to achieve much this time around either.

Chris: Iran doesn’t buckle under military pressure either, as we saw in the Iran-Iraq War in the 1980s.

Nick: Exactly. Remember in the early 1980s, when Saddam Hussein was a “good guy”? He was allied to the U.S. and the Soviet Union. And he had the support of all the rich Gulf Arabs to invade Iran. This was a full-scale war – Iran against the rest of the world.

At the time, Iraq had one of the biggest militaries in the world. And it used chemical weapons – including mustard gas and sarin – on civilians and military targets. Even after all that, Iran didn’t give an inch.

And the regime in Iran is a lot stronger today than it was back then. So it will be even harder to shift it now. If the U.S. is foolish enough to try, it could be a disaster.

Chris: The White House seems to think it can negotiate a better nuclear deal with Iran. But that looks like another unlikely scenario. Trump tore up the previous deal. Why would the Iranians sit down and give him more concessions?

Chris: It’s hard to see where the way out is. Trump doesn’t like to lose face, either.

Nick: You’re right, there is no obvious way out. At a minimum, I believe there’ll be a regional war. That may sound dramatic. But I lived in Lebanon in the Middle East for years. It gave me a valuable perspective on how Middle East geopolitics work.

Westerners are generally not used to people who mean what they say. But Iran’s military, and its president, have been clear. They say, “If you’re going to sanction our oil and make it hard for us to export it, we’ll make sure nobody else can either.”

That’s not bluster. The Iranians mean what they say. And they can back it up. It’s a dangerous situation. And the drone attacks on the Saudi oil facilities this weekend prove that.

Chris: How would a regional war affect the oil price?

Nick: I’ll tell you what I told my Casey Report readers in July. [Paid-up subscribers to that letter can catch up in full here.] We’ve seen external oil shocks like this before. So they can help us figure out what might happen in the future.

The first oil shock happened in 1973. A regional war in the Middle East caused the price of oil to nearly triple. 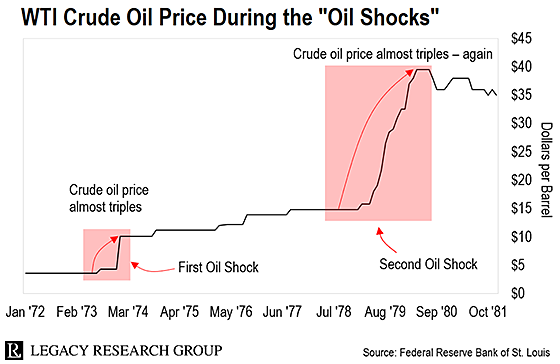 So if we do get a regional war in the Middle East, I expect the impact on the oil price to be at least as severe as the first two shocks.

In today’s prices, that would likely mean oil shooting above $200 a barrel – or roughly a 200% gain from here.

Chris’ note: You don’t want to be sitting on the sidelines when the next oil shock hits. If you want to take advantage of this opportunity, owning oil stocks is key. And Nick has found four companies that will soar as oil prices head higher. Find out more about them right here.