That’s what members of Iran’s Revolutionary Guard yelled into the air as their gunboats buzzed a British-flagged tanker, Steno Impero.

As the gunboats circled, a helicopter hovered over the tanker. Then, Iranian commandos in tan camouflage and black ski masks shimmied down a rope onto the tanker below.

The incident (which you can watch here) happened last Friday in the Strait of Hormuz. That’s the narrow body of water that links the Persian Gulf to the rest of the world.

As we’ll show you in today’s Cut, it’s part of a battle for control of the roughly 21 million barrels of oil that pass through the strait every day.

He first wrote about this in The Casey Report last August. He told readers that the Iranians wouldn’t hesitate to block oil passing through the strait if they felt threatened enough.

And he warned that, if history was any judge, it could spike the price of crude oil to more than $200 a barrel.

So far, the Iranians have stopped short of blocking all tankers passing through the Strait of Hormuz. But after this weekend’s events, the area is on a hair trigger.

In May, tensions between the U.S. and Iran ratcheted up a notch.

Iran’s response has been “an eye for an eye.” If the U.S. wants to stop it from exporting its oil, Iran will make it costly for others to do so, too.

And so far, Iran has been true to its word.

Since May, it’s blocked or seized six foreign tankers passing through the Strait of Hormuz.

These are only skirmishes – for now…

So far, nobody has been killed. And Iran and the U.S. have avoided triggering all-out war.

But don’t count on it staying like that for long.

Last week, I (Chris) talked to Nick about the situation with Iran in depth for our Legacy Inner Circle advisory. (Inner Circle subscribers can catch up on that Q&A in full here.)

He knows a ton about the geopolitical situation in the region… and how it relates to the oil price.

You see, Nick worked for an investment bank in Lebanon. He lived there for several years. It’s an experience he describes as an “advanced training course” in Middle East geopolitics.

Nick says today’s skirmishes put Iran and the U.S. in a “gray zone”…

The two countries aren’t at war. But they aren’t at peace, either. Instead, they’re carrying out operations they hope will hurt the other side without provoking all-out war.

And that’s a dangerous place to be. Nick…

Outside parties are pushing President Trump to increase hostilities. Saudi Arabia and Israel, for example, are not shy about saying they want war with Iran. And they have enormous influence over the U.S. government. So even if Trump doesn’t want it to happen, other nations can cause mischief to increase tensions.

The risk is it goes over the line. For instance, after the Iranians shot down a U.S. drone on June 20, the U.S. Navy was within minutes of raining down missiles on Iranian military installations.

If that had happened, who knows what the Iranians… or the militia forces it sponsors in all of the Middle East… would have done next.

This all has major implications for the oil market…

Five of the world’s top 10 oil-producing countries border the Persian Gulf. They are Saudi Arabia, Iran, Iraq, the United Arab Emirates, and Kuwait. The Strait of Hormuz is their only sea route to the open ocean… and world markets. That makes the Strait of Hormuz the most important chokepoint for the global oil market.

In fact, about one-fifth of the world’s annual oil production (about 100 million barrels per day) passes through the strait.

That’s the connective tissue between the rising military tensions between the U.S. and Iran and the oil price. Nick…

A glance at the map above reveals Iran’s dominant geographic position. It could stop the flow of oil from all of the Gulf states to the rest of the world with military or paramilitary exercises in the Strait of Hormuz.

All Iran has to do is say, “The Strait of Hormuz is officially closed. Any ship that goes through does so at its own risk.” Then, if Iran bombs a couple of oil tankers, no oil company in the world is going to take the risk of going through.

The U.S. military confirmed this in a war game it ran in 2002. It was called Millennium Challenge. And it simulated a war with Iran.

The Pentagon concluded from it that Iran’s coastal battery of ballistic missiles could keep U.S. warships from entering the strait.

The last two times we saw tensions like this in the Middle East – in 1973 and 1979 – it caused “price shocks.” That’s when the price of something rises so quickly businesses cannot react.

If you’re old enough to remember the 1970s, you’ll know what I mean. But you can see what happened in this chart Nick shared with his readers… (It tracks the price of West Texas Intermediate, or WTI, crude oil.) 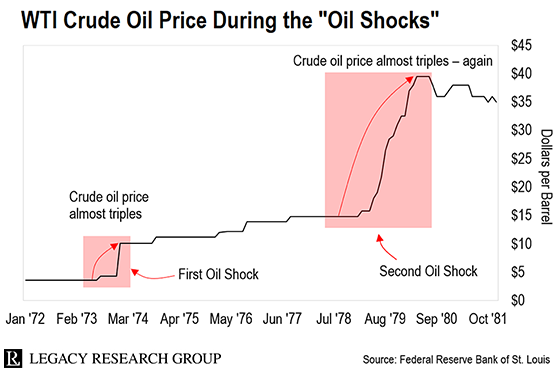 Nick expects the events in the Strait of Hormuz to kick off the “Third Oil Shock.” And he believes the effects on the oil price could be at least as severe as the first two shocks…

Adjusting for today’s prices, that would mean oil shooting above $200 a barrel.

In this environment, Nick says you want to own the highest-quality oil stocks. That means:

These stocks will benefit if things keep heating up in the Strait of Hormuz… and cause oil prices to skyrocket.